One of my collection focuses has always been around building Topps flagship sets.  I started collection in 1979 but the first set I collected was the 1981 Topps set.  I vividly recall trading way to much to my buddy for the last card I needed, #221 Bob Davis.  The feeling of completing a set was incomparable and I still get a little burst of dopamine when I mark the final card off a want list.

Years ago I set a goal to complete all the Topps flagship sets back to my year of birth, 1971.  For at least the last 2-3 years the one set I couldn't complete was the 1972 Topps set.  I was able to finish much of the set with the exception of the high number series.  I am usually a fairly persistent collector but the scarcity of the the high series and the cost of the cards I saw available made me do something I just don't do - I quit.  I made a firm decision to give up on the set with a thought that maybe I would stumble onto a large lot of them some day or find a seller at a National Card Show that I didn't have planned to attend but otherwise my goal to get all the sets from my birth year forward was no longer a goal.

Still loving to work on sets, I have completed the 1970 and 1969 Topps sets in the last couple years.  I even started working on a 1957 Topps set.  I had visions of having every Topps set since 1957 done with the exception of that dreaded high series of 1972.  I doubt I will ever get all the 1960s set completed but that's where my head was at.

One day I was looking at my want list and doing some math and asked myself if I had prematurely accepted defeat.  I figured that at just over 100 cards needed, if I were to pick up 3 cards per month I would be able to finish the set in around 3 years.  That spoke to me in the moment so I went onto COMC and found 3 cards that didn't bust my budget and picked them up.  The quest was back on.

I haven't been scanning to share on my blog or keeping great track of my progress.  I do think there was a month where I didn't get any but there were a couple times I picked up more that 3 from a seller doing a set break on eBay.   I did pick up one of the few non-high number cards I needed off a Facebook seller and I will share the entire haul soon, didn't want 2 Facebook posts in a row. 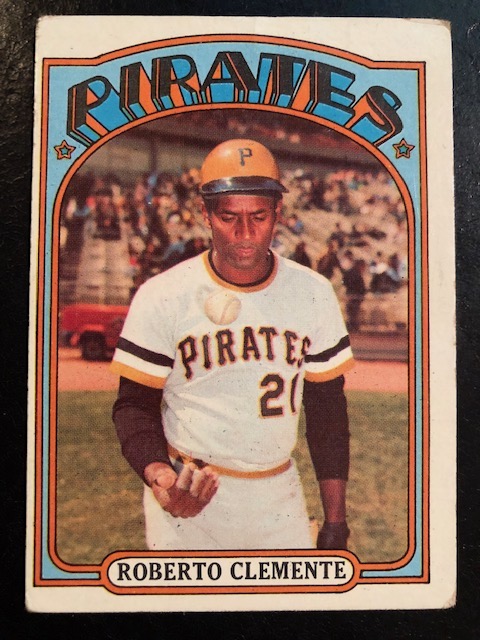 I have always loved this card and am so happy to have one in my collection.  I always thought the floating ball looked super cool then add in an iconic player in one of my favorite uniforms with an interesting background, you have cardboard perfection.

So I am sure everyone (everyone seems to be a pretty small number these days, 4 months of no posting can sure have an impact on the number of page views) is on pins and needles wondering what my status is on the set.  Well let me share that with you.

As of today, I need:
The Series 3 & 4 card, along with a couple other cards I have already picked up, were knocked off my want list but when I bindered the set they were missing.  I have 2 Series 5 and 7 Series 6 cards sitting in my COMC account.  I obviously have a lot of work to do but I have knocked more than 20 cards off the list in the last few months so I feel good about my progress.

I am going to have to lay out some series cash for the Rose, Ryan and probably half the remaining high numbers but as they say, the way to eat an elephant is one bite at a time.  This will definitely be my most difficult set build, do any of you have any stories of difficult card collecting quests?
Posted by arpsmith at 9:28 PM