Hall of Famer Pick Up

Just a quick post today but wanted to share a new pick up for the Hall of Famer baseball autograph collection.  I set a goal to pick up 5 new players this year and in looking through the list of guys I need, there aren't a lot of low price options available.  One guy on the list I decided to seek out was Al Lopez.  Lopez was elected to the Hall of Fame in 1977 by the Veterans Committee and while I believe he was primarily selected for his managerial career, he was a very good player as well.

As a player he set the record for most games played as a catcher with 1918, a record that stood for quite some time.  He was a two-time All-Star and played for the Brooklyn Robins/Dodgers, Boston Bees, Pittsburgh Pirates and Cleveland Indians between 1928 and 1947.

As a manager, he never had a losing season in either the major or minor leagues.  He has a .584 winning percentage which puts him in the top 10 all time.  And a crazy Yankee trivia fact, his 1954 Indians and 1959 White Sox teams were the only non-Yankee clubs to win the AL pennant between 1949 and 1964. 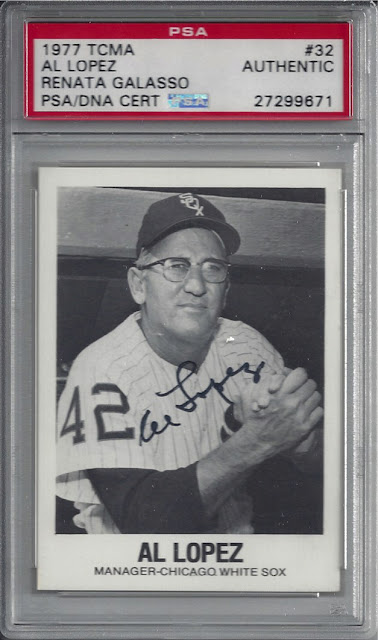 The card I picked up is a PSA certified autograph on a 1977 TCMA Renata Galasso card.  It features a nice black and white photo and he autographed the card across the chest.  He is listed as a manager and is wearing a #42 White Sox jersey, a team he still sits in 2nd place on the all time wins list for.

I had to go the route of a card like this because Lopez passed away in 2005 and to the best of my knowledge his only pack released autos are cut autos.  I think a card like this displays much better than most cut autos.  According to beckett.com, he has 71 different released autograph cards and based on my quick math a total print run of just under 700 cards.  His auto isn't rare and this card didn't break the bank.