I set a goal of adding 4 HOF autos to my collection in 2014 and I struck quick in January landing a sweet Paul Molitor auto.  I had actually listed 8 HOFers plus any newly elected guys and these two weren't on the list but I am going to count them.  Part of the reason they weren't listed as I thought they would be out of reach.  Luckily I checked out Sirius Sportscards and bid on a few HOFer autos - I scored two of them.  Check them out: 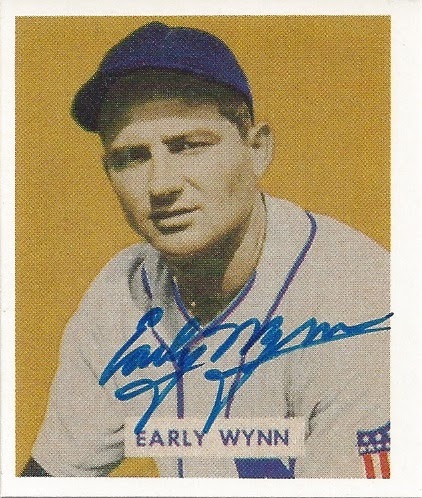 This is a 1949 Bowman reprint of Hall of Famer Early Wynn.  I typically chase after certified autograph cards for my HOF collection but Wynn passed away in 1999 and only has cut autos. I figured I would rather have this auto on a reprint card than some card where Upper Deck cut out a similar auto and placed it in some sort of frame.  This auto is a nice sharp blue auto and looks great in person. I have always thought Wynn was cool because he retired right at 300 wins. My second pick up was also of the reprint variety, this time a 1948 Bowman reprint.  Mize passed away in 1993. Beckett lists an ASA autographed card of him from 1983, not really sure what that is, plus a long list of cut autos so the same held true for this pickup.  I like the color photo on the Wynn better than the black and white of this Mize but love the fact he is pictured on the Giants. 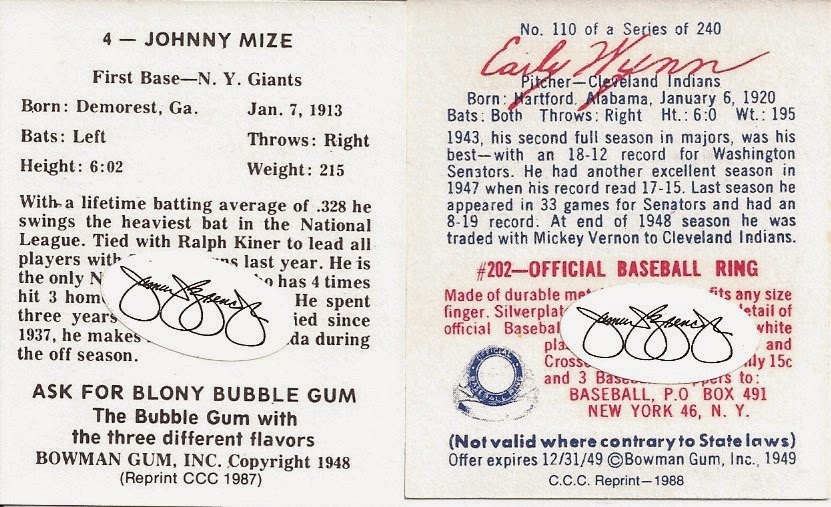 I feel comfortable with these autos as they have been authenticated by JSA as you can see from the stickers on the back.  In total these 2 cards set me back $23.45, a winning bid of $9 each with some auction and shipping fees.  Not bad for 2 deceased Hall of Famers.
Posted by arpsmith at 12:40 AM