I just got back on Friday from a quick work trip to San Diego.  The perfect, sunny weather was a nice break from the winter misery going on in my neck of the woods.  Even better, I got into SD early on Wednesday morning and had some time to kill before my first meeting.  My first stop was Balboa Park to stretch my legs, get in some steps and soak up some son.  My second stop was Carl's Jr. to have my favorite fast food burger for lunch (no Carl's in Kansas).  My third stop, after a quick Yelp search was Clairemont Sports cards.

The shop was great. It wasn't too big and had an old school feel.  The wall on the right had some narrow shelves with baseball boxes, bobbleheads and other collectibles.  Below the narrow shelves were deeper shelves with 3200 count boxes neatly labeled by set starting with 1957 Topps up to some current day sets.  There was a line of display cases that also contained labeled boxes, some sorted by players and other by teams.  Across the entire top of the display cases were 2 types of boxes, 50 cent boxes with stars, inserts and parallels & dollar boxes with superstar cards sorted by players.

The left side of the store pretty much replicated the right but was split between football, basketball and hockey.  The front of the store had a few cases with singles while the back has some higher end cards, graded cards and other oddball items.

At the front of the store sat a guy I assume was an owner sitting at a table with a Beckett Annual book pricing out some cards.  He was a super nice guy that I chatted with throughout my visit.  He shared some great stories of seeing games as far back as the 1950s and hit me with a trivia question he guessed I could never answer.  The question was Who was the first San Francisco Giant elected to the Hall of Fame.  Knowing the question had to be someone you don't initially associate with the Giants, I took a few minutes to think through and correctly answered Warren Spahn - he was impressed.

Shortly after I arrived a guy came in a dropped off a few boxes of late 80s/early 90s cards.  He had called ahead and was just giving them away.  They were his sons' collections and he wanted them out of the garage.  This shop takes donations like this, gives all the baseball and football cards to a guy who has a kids charity that accepts them.  The second shop guy, maybe a co-owner, started sorting through the cards and taking out the non-baseball/football cards.  He wasn't quite a chatty but still a cool guy.

I didn't have a ton of time and started on the Mays and McCovey dollar boxes.  I found a couple of Mays cards I needed: 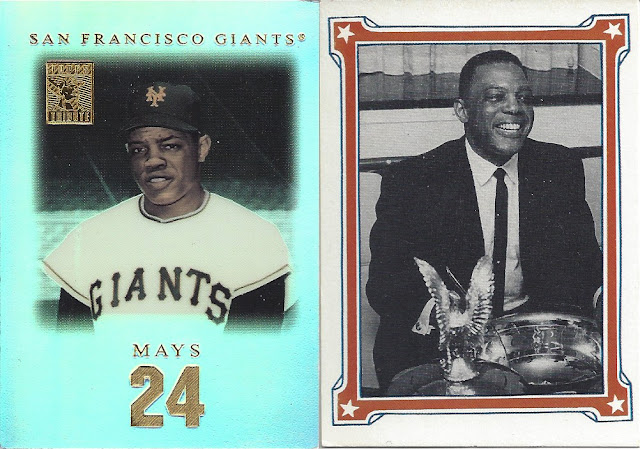 I felt these were worth a buck a piece.  I was shocked and surprised to find two new McCovey cards that I had never even seen before: 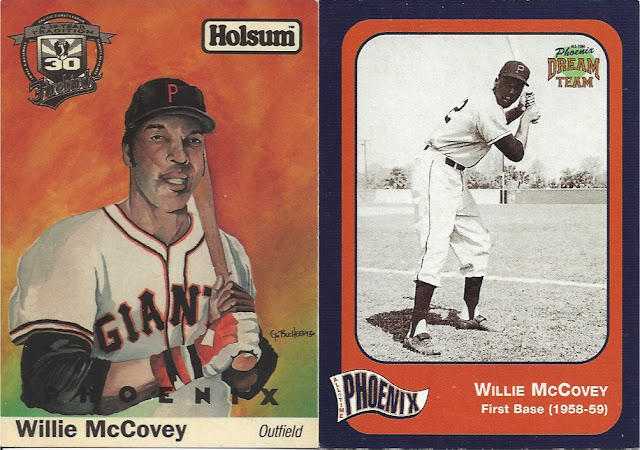 These are two oddballs of McCovey featuring him with the Phoenix Giants.  The Holsum card is from 1993 and the Dream Team card is from 1997 and produced by Keebler and The Arizona Republic newspaper.  I probably would have paid 10X the amount for these, it is rare that I run across a McCovey card I didn't even know existed as I have been collecting his cards since the late 80s.

Here are the backs: 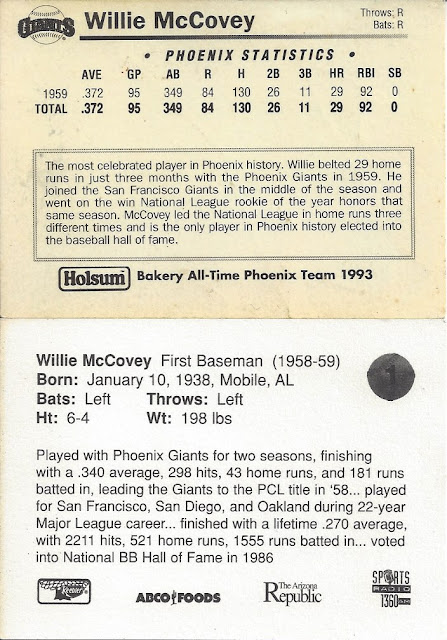 My final look was in the box of 1957 Topps.  He had some higher end stars and top condition cards and while my 2019 goal focus on $100+ cards, I was more interested in digging through the commons.  I was able to identify 54 cards I needed that hit my quality standards (no paper loss, no writing and no significantly noticeable creases).  Here is a look at the stack: 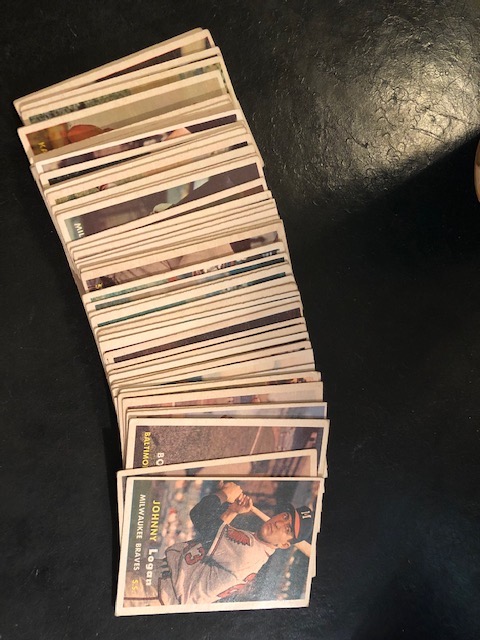 I actually bought 61 cards but 7 of the cards I accidentally got 2 of.  I handed the stack to the guy a little worried about what price he would quote as he didn't give me a concrete price when he handed me the box.  I was pleasantly surprised when he quoted me $60 for everything.

If you are ever in SD, especially if you are looking for some great guys and non-graded vintage, I would strongly recommend Clairemont Sportscards.  I will I had a couple of hours to hang around and dig through stuff.  I am kicking myself for not asking about more oddball McCovey stuff as the Padres like to claim him as their first HOF player.  My 1957 set build is coming along nicely, I am up to 134 of 407 cards if I count a few in my COMC account including a few of the higher end (but none of the extreme high end) cards.
Posted by arpsmith at 7:47 PM