I was doing some sort of eBay search a little while back and ran across a couple of listings for some cards I wasn't aware of.  Apparently there were some stadium giveaways on National Baseball Card Day and the Giants ended up getting a 10-card team set.  I had two different listings on my watch list but the cost was a little more than I was willing to jump at.  Luckily the seller sent me an offer and it was within the range I was considering so I jumped.

Here is the Giants set: 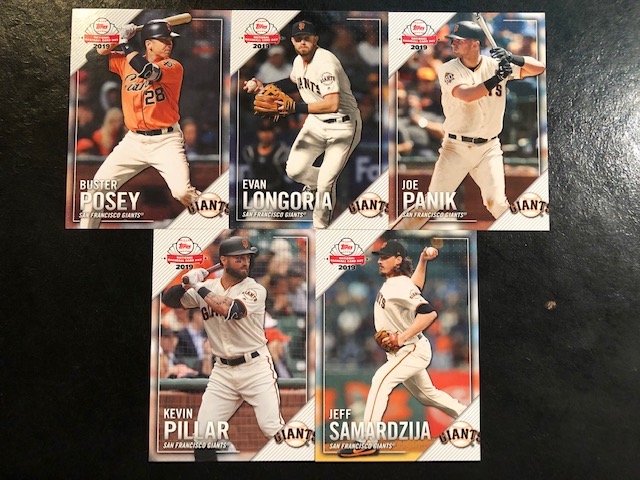 Pretty solid selection of Giants here.  Buster came back after a pretty difficult injury and while he didn't hit up to his past levels, his defense was solid and he is the team captain.  Longo's 2nd year with the team was much better than the first - we have him for 3 more years at a high contract value so I hope we get some production.  Panik was released and picked up by his hometown Mets.  Pillar had the best offensive season of any Giant but there is some talk that his low on base percentage might not make him a fit on the team - I think we need to keep him.  Samardzija had a very solid year and I am excited to see him continue that success in 2020. 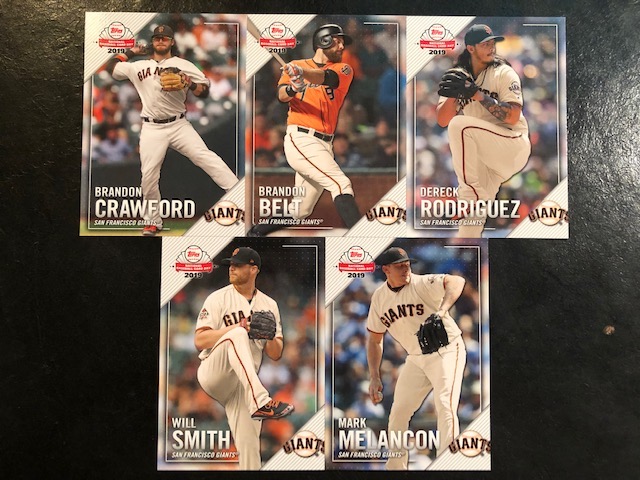 The Brandon's both make the team set, while I appreciate all their accomplishments I think I am ready for both to go.  Crawford's offense is really bad, he has lost any speed he used to have and his defensive has regressed to average at best.  Belt seems to prefer walking over trying to drive the ball and just doesn't produce at the level of an MLB corner infielder.  Will Smith had a great year as the Giants closer but will be a free agent at the end of the year.  Melancon had a decent start to the year with the Giants, good enough for the Giants to offload his contract before the trade deadline.  My biggest surprise is the absence of Madison Bumgarner - maybe it was in anticipation of the trade that didn't happen. 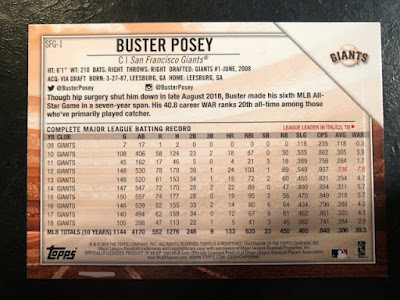 I decided to share a card back as well, the numbering is SFG-# and the team logo appears in the upper right corner.  Nice solid back with the career stats.

Did anyone else know about these and/or pick their team set up?
Posted by arpsmith at 10:00 AM