I haven't spent too much time trying to track down new HOF autos for my collection but while messing around on COMC a little while back I ran across a good deal on an auto to add to my Hall of Fame Baseball collection. 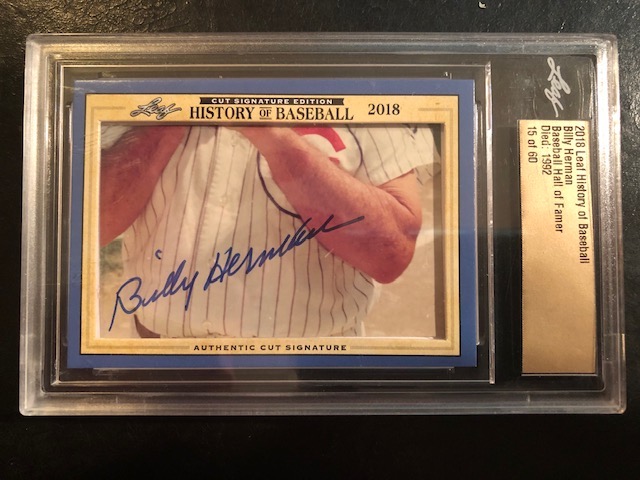 This is a cut auto of HOFer Billy Herman from the 2018 Leaf History of Baseball release.  Herman started his career with the Cubs in 1931 and this cut auto seems to be off a photo he signed in a Cubbies uniform.  In 1941 he was traded to the Brooklyn Dodgers and a bit for the Boston Braves and Pittsburgh Pirates.  Herman was a 10X All-Star and ended his career with a .304 batting average and 2345 hits. He was known for his defense at second base and held a number of defensive records when he retired in 1947.

Herman was elected to the Hall of Fame by the Veterans Committee in 1975.  His stats don't measure up greatly to other HOF second basemen however 2 of his top 3 similar batters on Baseball Reference are fellow HOFers (Joe Sewell and Red Schoendienst).

This was a nice economical addition to my collection and brings my total up to 106 different players.
Posted by arpsmith at 3:00 PM