I have decided to start a series of posts featuring some of the cards that hold a special place in my collection despite not fitting into a specific collecting category and I call them cards I have Just For The "F" Of It (as in fun).

I haven't done one of these in a while so I decided to do a double feature today and share a couple of basketball cards that I picked up for my collection.  Both were bid board wins from my LCS that closed down a few weeks back and these are the types of cards I am going to most likely miss out on with the closure of that store.  I may not have ever sought out these cards but when I saw them for sale and could pick them up and check them out I decide to make a bid and eventually bring them home. 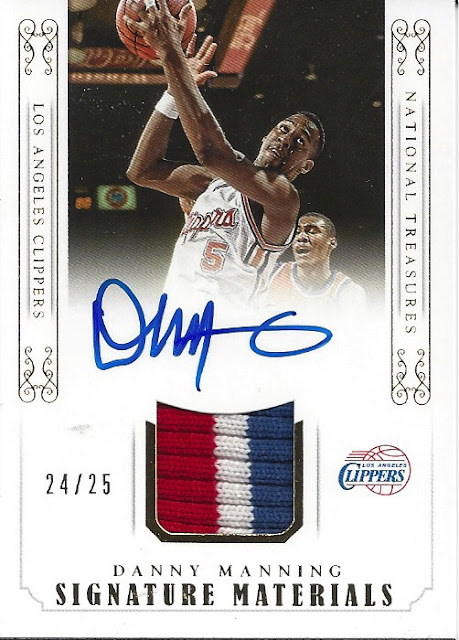 This first card is an auto/relic of Danny Manning from 2014-15 National Treasures.  Manning was never really a favorite of mine but his pro career started with the Clippers right before I entered college at USC.  At the time the Clippers played at the Sports Arena which was right off campus and we could walk over and pick up a ticket on the cheap for just about any game.   I probably saw him play a couple dozen times.  He wasn't the prototypical power forward of the day like Charles Barkley or Karl Malone but he was pretty skilled and talented - it was fun to watch him play.

When I saw this cool swatch, it looks like part of a wrist band or some kind of trip and I love how Panini made it Red/White/Blue, along with an on-card autograph numbered to only 25 from a high end product I had to put in a bid. I believe I brought it home for somewhere between $5-8. 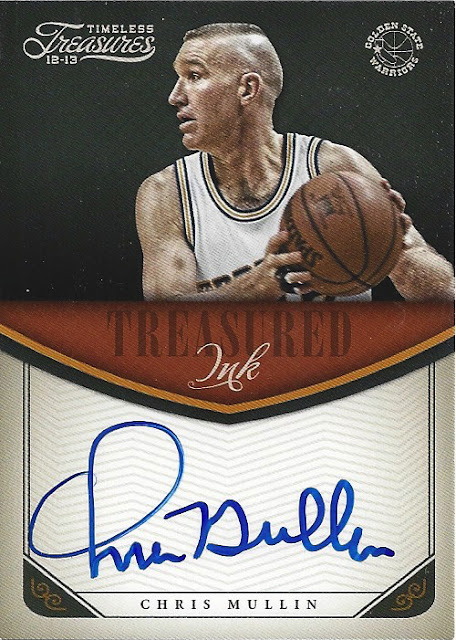 The other card I decided to share today for the F of it is this 2012-13 Timeless Treasures auto of Hall of Famer, All-Star and Dream Teamer Chris Mullin.  Mullin's career started a little before Manning's but there was some significant overlap.  Mullin started with the Warriors when I was in high school and cheering on my home town Sacramento Kings.  The teams were somewhat rivals.  When Run TMC broke up with Mitch Richmond going to the Kings and Billy Owens going to the Warriors the battles heated up and that is where some of my best memories of Mullin come from.  This card is numbered 030/199 and was in the same price range as the Manning.

I am virtually certain that I was drawn to these cards because these players played at the peak of my NBA fandom.  I am more of a casual fan but during college my group of friends and I would watch basketball often, watch Sports Center every night, started our own fantasy league and collected hoops cards together.  Fun times and great memories.
Posted by arpsmith at 12:23 PM

Email ThisBlogThis!Share to TwitterShare to FacebookShare to Pinterest
Labels: Just For The "F" Of It