One of my favorite football players growing up was Dwight Clark of the San Francisco 49ers.  Clark of course is most famous for The Catch, a catch in the back of the end zone against the Dallas Cowboys on 1-10-82 to propel the 49ers to their first Super Bowl, Super Bowl XVI.  I was 10 years old at the time and had become a Niner fan a couple years earlier as an act of rebellion against my dad (he was a Raiders fan).  In the early 70s, the 49ers could not get past the Cowboys several times in the playoffs so this victory was a big milestone for the franchise and was the start of a dynasty that resulted in 5 Super Bowls.

Many Niners fans credit Clark and his amazing Catch as the catalyst for the dynasty and remember exactly where they were when they watched the play.  You can count me among those fans, I was at my parents' friend's house in Auburn, CA.  I have shared the story with friends and kids about how we ran around the house celebrating then nervously watched the extra point and last defensive series to finish off the game.

I am not the only one who has stories to tell about The Catch and this book captures the stories of dozens of 49er fans as a tribute to Dwight Clark.  One of Clark's wishes prior to succumbing to ALS last year was to have a book like this put together.  The author, Matt Maiocco sent out a message to fans to submit letters about their feeling about Clark and The Catch and he compiled them into a documentary.  I have yet to see the documentary but my dad, a converted Niners fan, says it is great.  After the success of the documentary, it was decided to put this book together and honor DC's wishes, here is a quote from him just a few months before his passing:


"I've often thought that if I could get the word out somehow to get the stories, I should put a book together of the stories that these 49er fans lived through at that moment.  Hopefully, long after I am gone, 49er fans will still enjoy that play and that year - the team that started it all"

Here is the cover of the book: 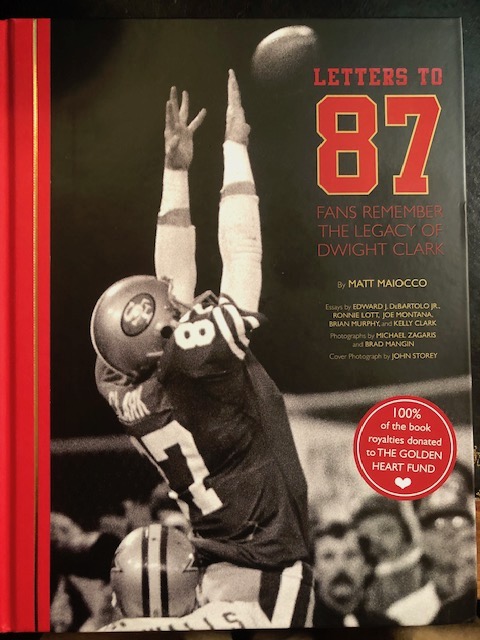 The book consists primarily of fan letters that were submitted featuring stories of watching The Catch, meeting Clark and the way the 49ers brought families together.  It is very touching.  Additionally there are several contributors - Eddie DeBartolo Jr. - former owner of the 49ers, Matt Maiocco - the person who put it together, Ronnie Lott - HOF CB and S, Joe Montana - HOF QB, Brian Murphy - a reporter who covered the Niners, and Kelly Clark - Dwight's wife.

The letters were powerful and some were emotional, it is such a strong legacy for a former football player and executive made such an impact on so many lives and families.  It is a very quick read and super enjoyable for this 49er fan and I think any sports fan would be touched.  The portions written by the contributors are heartfelt and demonstrate how great of a man Clark was and what a legacy he left behind.

Another great aspect of the book is the photography.  In the Afterward it is shared that most of the photos were acquired by three photographers and have never been shared before.  They are all in black and white and of amazing quality.  I decided to take a pic of the back to share one of the photos: 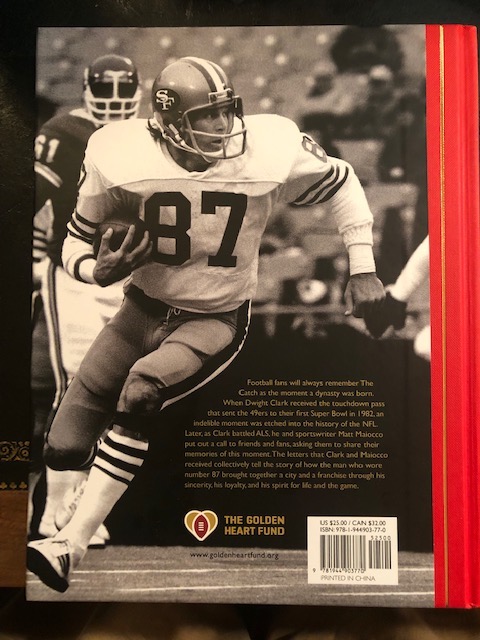 The back of the book also features the logo of The Golden Heart Fund, this is a charity that was set up to help former 49er football players after their retirement.  All the proceeds of this book are being donated to this charity.

I saw an announcement that this book was coming and found it on pre-order for a discounted price and it was quickly delivered right after it was released.  I usually read a bit in bed before going to sleep and decided the structure of this book would lend to perfect bedtime reading.  It worked like a charm, although it was tough to put down a couple nights, and I quickly made my way through it.  One of my favorite sports reads in quite a while and I would recommend it if you are a football fan and need some reminders on how fanatical and emotional fans can be.
Posted by arpsmith at 3:00 PM