I joined a Facebook group focused on SF Giants cards a few weeks back.  A lot of the posts are people sharing their new Giants cards they have added to their collection.  It seems like Will Clark and Buster Posey are the favorites of the group which should surprise me.  I am still amazed at what a  following Will The Thrill has in the card collecting community, some of his auto cards go higher than Hall of Famers these days.  There are a couple big Tim Lincecum collectors with impressive collections and Joey Bart seems to be picking up steam.

I like seeing what others have added to their collection and occasionally some items are put up for sale.  A little while back, there was a posting with 2 cards that immediately interested me for $15 delivered.  I thought about trying to negotiate but ultimately decided I didn't want to miss out on them. They are cards that I have been desiring since their release in 2017.

These cards are box toppers from 2017 Gypsy Queen and the set is called GlassWorks.  These measure 4 1/2" by 6 1/2" and are super shiny silver.  The scans below show up blue. I love everything about the design of the cards from the shiny foil to the large picture to the Gypsy Queen artwork. 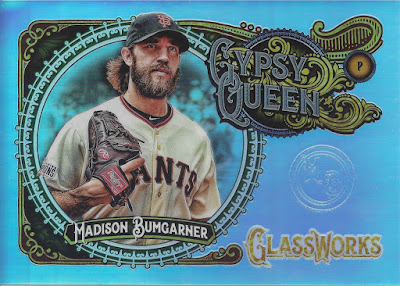 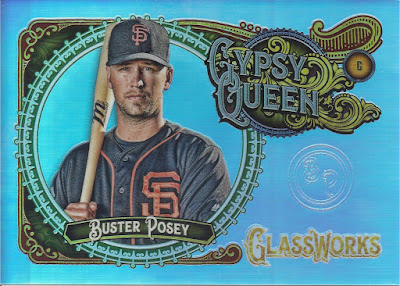 These two cards have been on my want list since 2017 but I never picked them up.  Prices seemed pretty high on the secondary market probably due to the difficulty in packaging them and mailing them.  The ability to pick up both Giants from the 25 card set was too good to pass up.  I do have the purple Posey parallel (say that 5 times fast) numbered to 150 which is nice but the base silver it the better looking version to me.