My favorite player of all time is Hall of Famer Willie McCovey.  I have amassed a collection of almost 1400 different  McCovey cards since I started collecting him in the late 1980s.  I will show off one of my favorite cards on select Mondays.  Stretch was one of the most feared hitters of all time and I am excited to show off my collection.

Today I decided to dig into the binders and share a couple items that I have had in my collection for quite some time.  One of the fun parts of collecting players that played prior to my birth are tracking down items that I never saw in the wild and the items I am showing today were produced in the year of my birth. 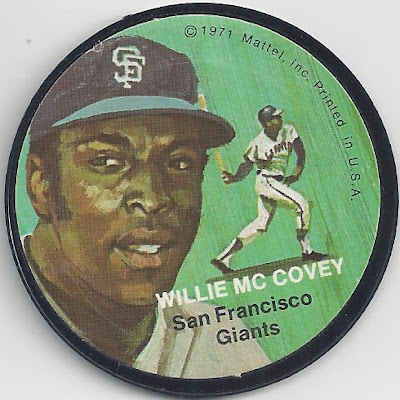 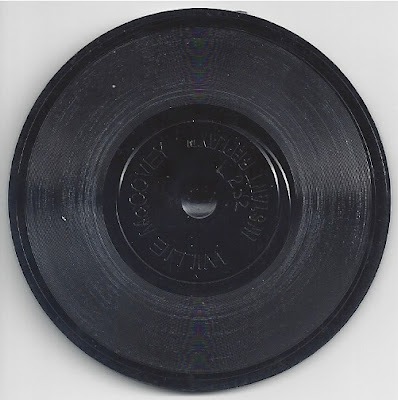 Here is the McCovey, it features a recording on one side and a color drawing of the player on the other. The picture appears on a paper disk that is glued onto the smooth unrecorded side of the mini-record. On the recorded side, the player's name and the set's subtitle appear in arcs stamped in the central portion of the mini-record.  It is a little hard to see but it is there.

There is a second version of each players that has pictures on both sides: 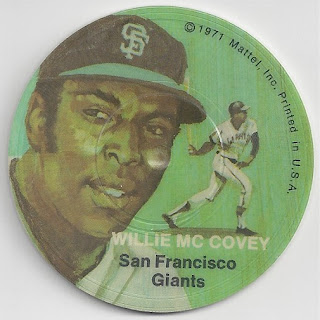 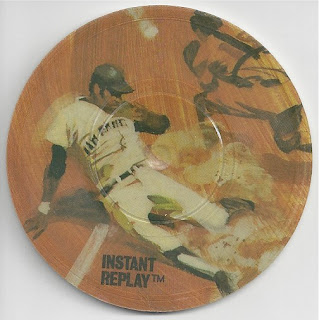 This is a more rare version but I am not sure by how much.  From a Beckett pricing standpoint, the black version is listed at $25 and the dual sided is $30.  The double sided discs are ivory instead of black and while the first side has the same photo, the second side has an awesome action photo of Willie Mac sliding into home plate.
Posted by arpsmith at 3:00 PM