A Consistent Source of Giants

One of the things I have been able to count on consistently since I started blogging is the generosity of the community.   Even with the slim volume of posts over the last couple years I still get occasional just because packages in the mail from fellow collectors.

I haven't tracked the number of packages I have received over the years but I am certain that Greg over at Night Owl Cards has sent me the most.  Every so often a PWE or bubble mailer will arrive from NY and I can usually count on a few Giants to add to my collection.

Within the last week one of those PWEs arrived with some 2020 Giants and this group of 6 cards were added to my collection. 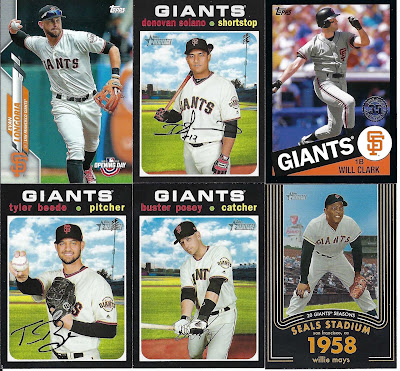 Many of my recent card purchases have come from a few Facebook groups and I have tried to be pretty aggressive in picking up new release Giants, particularly the base and insert cards.  As I looked through this group I was pleasantly surprised to see I needed half of the cards.  I hadn't yet purchased any packs or singles from Opening Day this year so the Longo is a great add.  Still can't believe the Giants only have 3 cards in this year's Opening Day.  Through 2 sellers, I bought what was supposed to be a full Giants team set of Heritage base along with the Mays insert set but one card was missing, the Solano card Night Owl sent my way.  My final add, was the awesome black parallel 1985 design of Greg's favorite Giant of all time Will Clark.

I went back through my blogging scans and found a couple other packages that Greg sent my way that I never got around to posting. 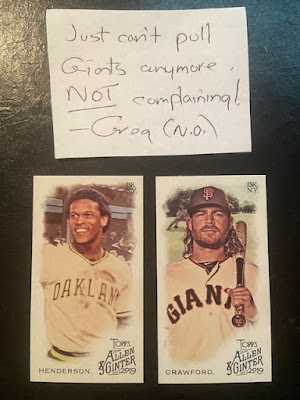 When I opened up this package I got a note that set up different expectations, apparently Greg was in a rut when it came to pulling Giants but he shot me a Rickey for my collection. 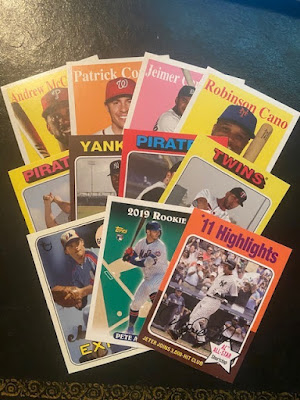 Also included in that package was a group of Archives cards I needed for my set.  This set is now just about put to rest, I am just waiting for a delayed, due to coronavirus, package from COMC for the last SP to complete it. 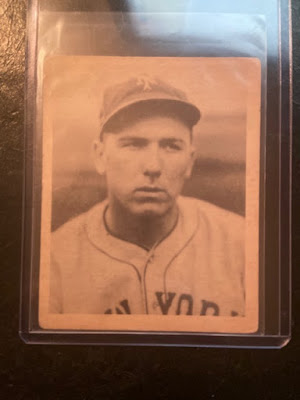 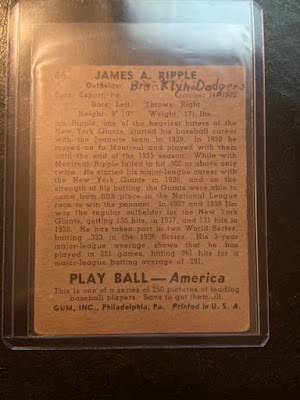 Finally, there was this awesome vintage Play Ball card of James Ripple.  My guess is that this card was sent Greg's way due to the modification on the back that must have taken place after Ripple's trade from the Giants to the Dodgers in September of 1939.  Apparently it was too much of a Giant to stay in his collection and I am happy to have it.

The final group of cards from Night Owl I scanned was back to being Giants focused. 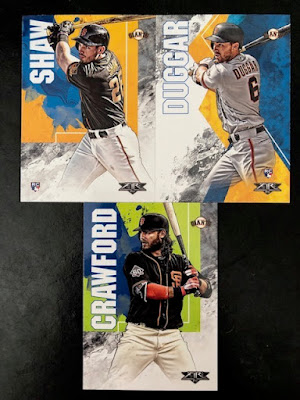 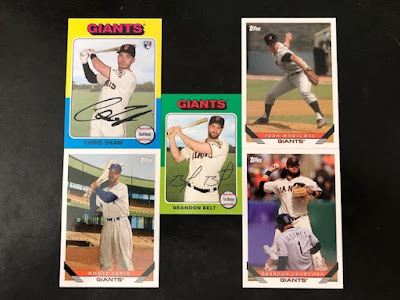 I also got these Archives cards.  Greg is well known for his love of the 1975 Topps set and this package illustrated that his dislike for the Giants exceeds his love for the 1975 minis thanks to the inclusion of this awesome Brandon Belt mini. 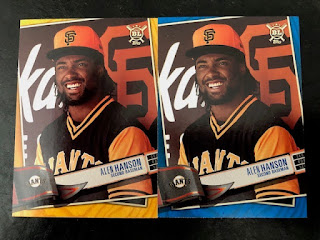 Finally the package was finished off with a pair of Topps Big League parallels of short-lived Giant Alen Hanson.  Big League is a set I appreciate but haven't yet pulled the trigger to build so adding Giants through trades or packages like this is always appreciated.

Thanks for your continued generosity Night Owl and you are welcome to keep those Giants coming my way!
Posted by arpsmith at 11:00 AM