I ran across a photo recently in a Baseball HOF newsletter that I get weekly.  By the way, before I get into this further, if you aren't signed up for their weekly email I strongly suggest you head over to their website and sign up.  Typically there are 4 articles each week that are linked sharing information about some of the artifacts in the Hall or historical events that relate to baseball.  For the last couple of years they have featured one article per week on a player and one of his baseball cards.

Back to the regularly scheduled program.

Here is the photo I ran across: 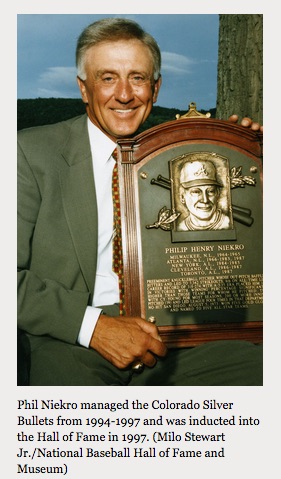 The article was about the Colorado Silver Bullets, an all women's baseball team that Phil Niekro managed.  On the sidebar they showed this photo of Niekro with his HOF Plaque.  What surprised me with this photo was Phil's appearance, he looks much younger than I would have thought based on some of his baseball cards I have in my collection.

If you look back at cards from the end of his career (1987-88) he looks much older than his 47-48 years of age in those cards to me.  However, looking at this picture taken in 1997 I think he looks pretty good for someone who is 58 years old. I decided to pull some cards from a little earlier in his career to see how they compare:

As I look at these cards and that HOF pick, he looks close to the same age almost 20 years later.  I guess he aged fast then held it together after that for a while.

This picture and thought of this post also inspired me to take a look back at Niekro's career.  I remember thinking of him as more of a Hall of Very Good player who just accumulated stats due to the knuckleball so I wandered over the Baseball Reference to see how he looked with some of the more advanced analytics.

One of my favorite areas to look at are the Similarity Scores and looking at this list he holds up pretty well:

Of his top 10 similar pitchers, 8 are HOFers and the other 2 often enter arguments/discussions about guys left out that should be in.

Another cool area to explore is the HOF Statistics to see how he measures up:

By all of these measures, he looks like he is an above average HOFer.  I have read some books and articles that leverage the 7-year peak WAR and JAWS to try and assess players that are accused of being accumulators vs. star and looking that those 2 measures maybe my initial impressions weren't accurate. Looks like Phil Niekro is a solid and deserving Hall of Famer.