Over the past couple months I have been spending some time in a couple Facebook message groups and in one in particular I have made a few connections.  Two of the guys are local and I have met them in person to pick up a couple lots of cards.  One was a nice stack of inserts for my 2019 Topps Series 2 set build and the other was some 2019 Ginter, both Giants and some player collection needs.  Both of the guys break multiple cases of different products and should be good sources for me in the future.

I have also connected with some guys that I have made deals through the mail with, I think there are 2-3 guys who have identified me as there go to Giants guy.  It has been a nice new source for cards and what I like most is that everyone I have connected with will sell below eBay prices and I can usually get a nice group of cards for a flat $4 shipping.  I haven't made any trades yet but am eyeing a couple groups that do trades as well.

Let me know if you have any go to groups on Facebook that would be worth me looking into.  Also, if you are interested in checking out the ones I am in, drop me a comment or an email.

Here is the most recent purchase I got last week through Facebook: 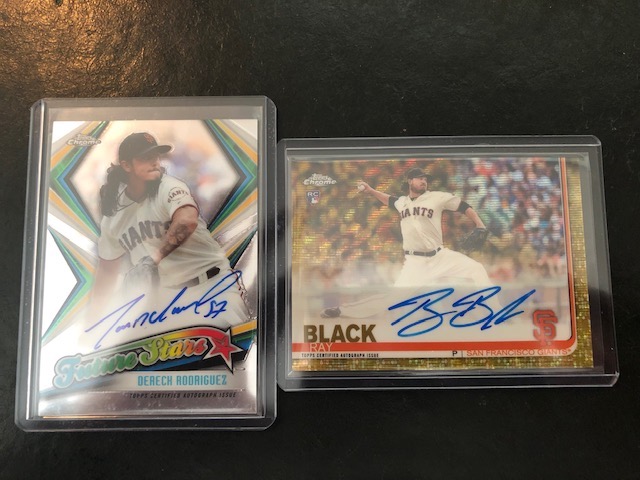 This buy was for 2 Topps Chrome Autos.  The Dereck Rodriguez is serial numbered /99 and the Ray Black is /50.  After a strong rookie season last year, Rodriguez has been up and down this year.  I don't see him being a top of the rotation starter but I am hoping he can establish himself as a 3 or 4 starter, seems like a good dude and it is always nice to have the kid of a HOFer on your team.  I really like the design of the Future Stars Chrome card and Rodriguez's on card auto looks great.

Ray Black was traded at the deadline and despite a triple digit fastball, he could never really put it together to be a consistent guy in the Giants bullpen.  They have much better options for the pen so I wasn't sad to see him go.  Even though he isn't on the team, I couldn't pass up the opportunity to get a Gold Shimmer on-card auto of a Giant for my collection - the card looks awesome.

The seller, knowing I am a Giants guy, decorated the bubble mailer with a Dodgers logo - not cool!  But he did include 2 Giants pink refractors to redeem himself. 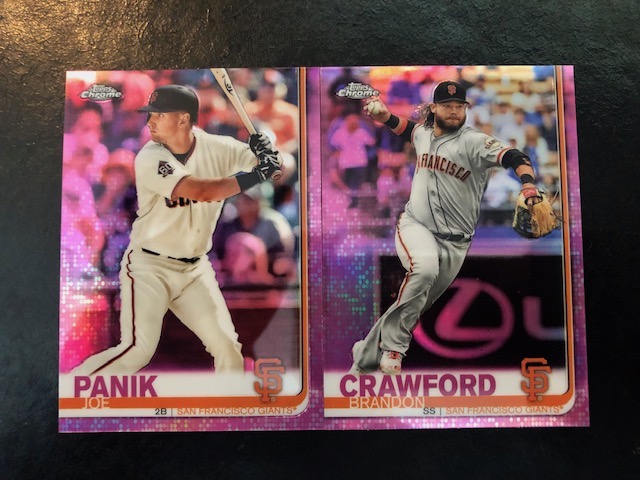 This had been the Giants double play combo for a few years until Panik was cut recently.  He has the worst OPS in baseball so it wasn't a poor baseball decision but hurts a bit as he was an important part of our last title run.  I actually hope he gets back to All-Star form with the Mets (as long as he doesn't kill the Giants when they play) seems like a good guy and went out with class.

Gonna try to keep this blogging thing up for a while if I can.  Have decided it is quicker, and therefore more likely that I post, if I snap iPhone pics instead of scanning, hope you all don't mind.
Posted by arpsmith at 3:23 PM