Well, it has been 4 months and 1 day since I last posted. I have obviously gotten out of the habit of posting but I figured if anything might break me out of my posting slump, maybe National Baseball Card Day could be it.  There has been a lot going on in my world this year, both inside and outside the hobby, that I would like to share if I can get back into some semi-regular posting (assuming I haven't fallen off everyone's blog roll and nobody reads this).

I did make it to my LCS today to celebrate NBCD and took one of my boys.  I made a couple purchases and we scored 2 packs plus two of the bonus Bryce Harper cards: 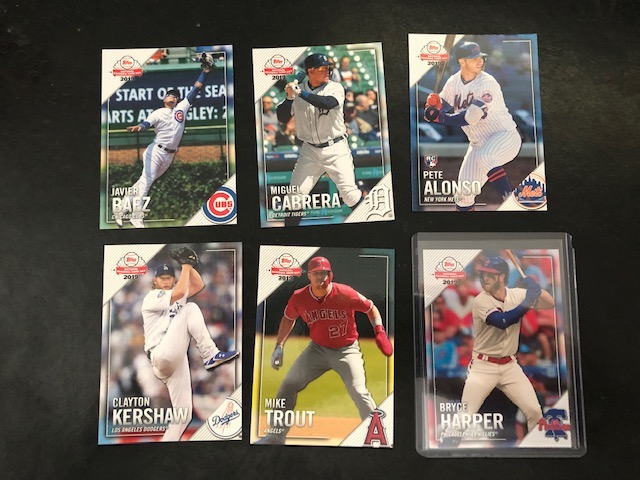 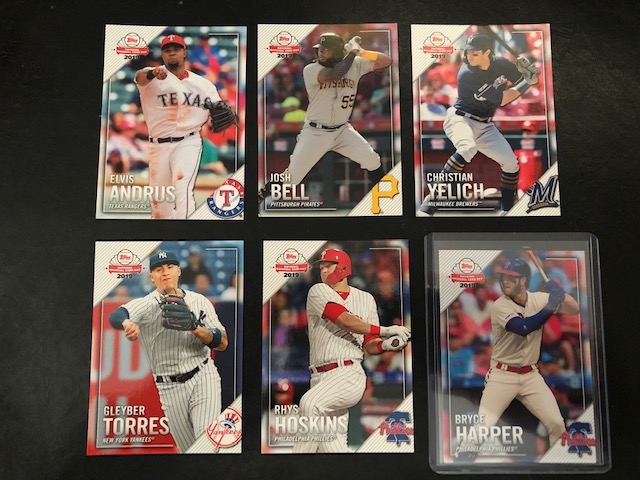 The first pack produced a little more star power with Kershaw, Trout and the Alonso RC.  I was a little disappointed that I didn't get a Giant (assuming there is one).  I will probably head back next week for the Vlad Jr. card, maybe I will see if they have some singles.

I begrudgingly decided to pick up a box of 2019 Archives Signature Series.  I have only bought this product once and got an Andruw Jones 1/1 but I had watched a bunch of these broken on Youtube and the checklist isn't impressive. 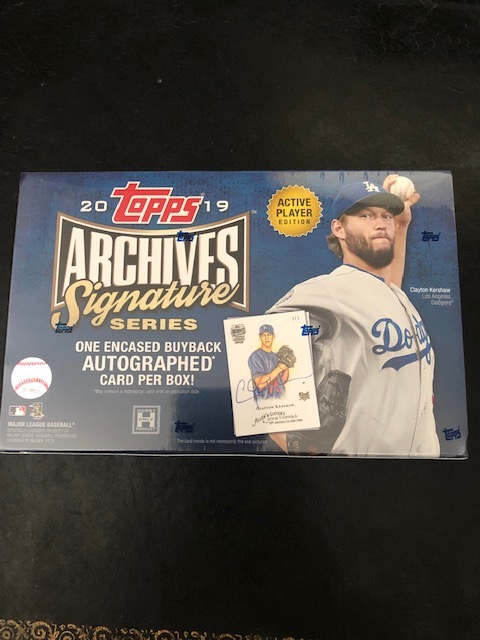 Here was my pull: 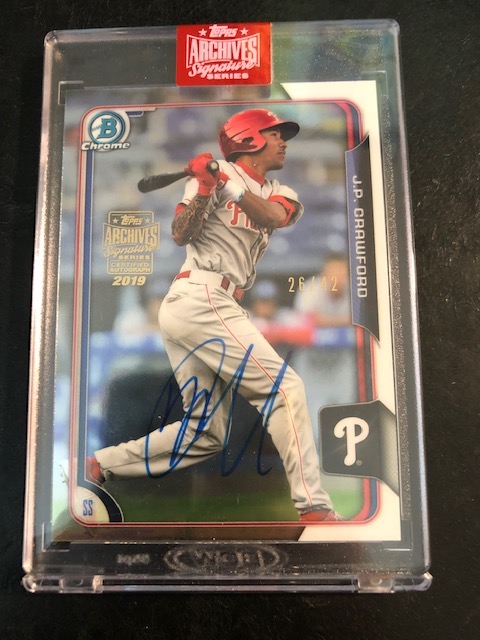 I should have resisted, a player I am not fond of on a team I don't collect who is on a different team now.   In looking on eBay it looks like I would be lucky to get $10 out of this card.  My other thought was to pick up a pack of Tribute which just came out and was the same price.  I was worried that I would score only a relic (in 6 packs there are 3 autos and 3 relics) for my purchase and would have been disappointed.  Oh well, you win some you lose some.

When I walked into the store, I saw a box that caught my eye: 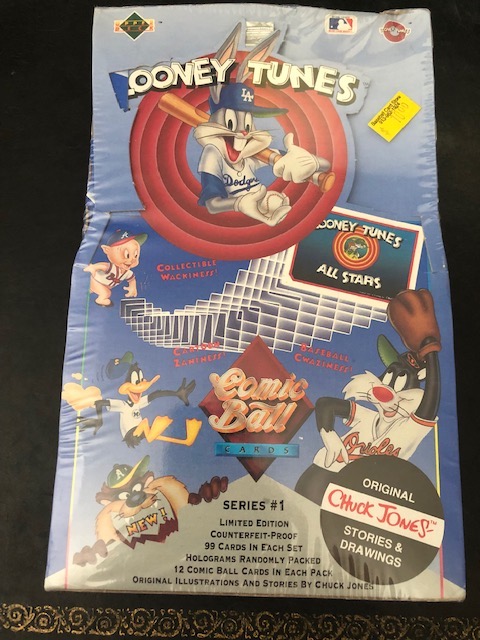 I bought a large collection of cards a couple years back and it had a few boxes of Series 2 of these Comic Ball cards.  I cracked one of the boxes and got reasonably close to the set so I thought I might pick this up and try to build both series.

As my eyes shifted to the next shelf over, I spied this: 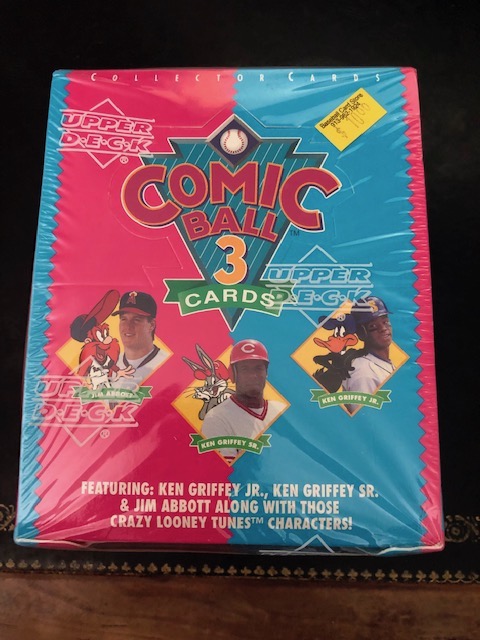 A Series 3 box!  I ended up deciding to get both and I cracked and sorted both this evening.  I don't have a complete set of any of the 3 series but I did put up a want list on my Set Want List page, if you happen to have any sitting around.  If you are interested in singles, I have a pretty good stash of duplicates.

After paying for my purchases, a guy asked the owner if he had any boxes with Cubs relics.  He pulled out a large box with a bunch of Triple Threads cards.  I decided to wait for the Cubs collector to finish up and went through it looking for some Giants and was pretty happy with what I found: 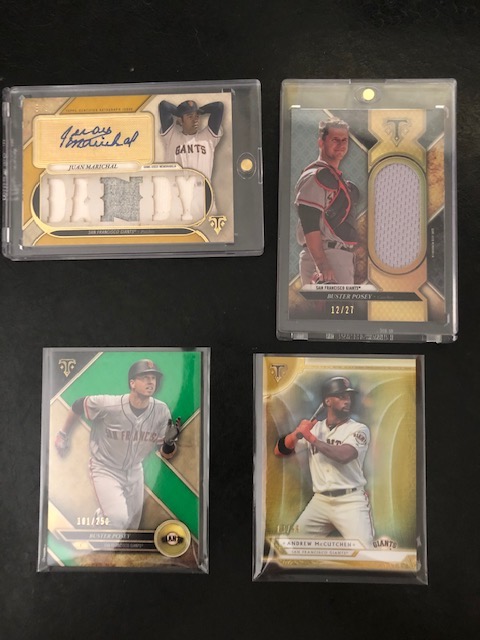 The Juan Marichal in particular  is a great looking card but I got a little concerned when the guy helping me asked another guy to look up prices on eBay but I was okay with the price he threw back at me and decided to get the cards.

When I was in the shop the owner indicated they had set up at the National last week in Chicago and was very happy with the results.  He stated it set an attendance record and from a sales perspective, it was there best show ever.  Glad to hear the hobby is healthy.  Chicago isn't too far from me here in KC but had some conflicts that wouldn't allow me to go this year.  Next year I don't see myself heading to Atlantic City but I have a goal to get to Chicago for the 2021 show.

Did anyone go to the National this year?  Any cool pickups? Anyone want to join me in a pledge to hit the 2021 National and do a blogger meet up?  You would have almost 2 years to save.
Posted by arpsmith at 10:57 PM