I decided to pick up this 1999 Fleer Sports Illustrated Greats of the Game on card auto.  I really like the image on the card and when I can get an on card auto over a sticker auto it is preferred. 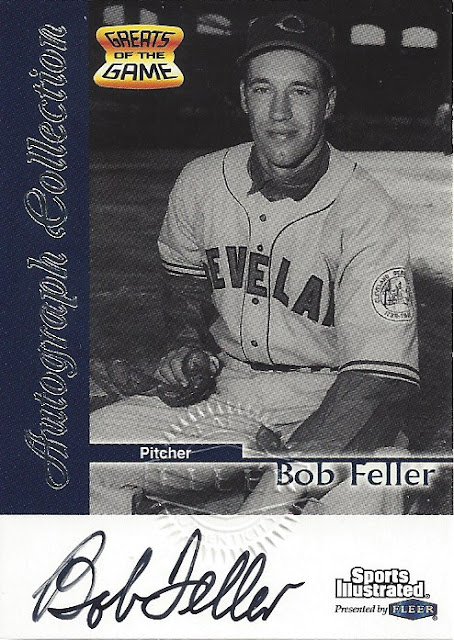 Bob's signature is nice and bold and as they did at the start of the auto insertion timeline, there is an embossed seal certifying from Fleer that the auto is authentic.

Feller started his career with the Indians in the major leagues as a 17 year old, never spending time in the minors.  His entire career was in Cleveland, over 20 years from start to finish, but it was interrupted by a 4-year stint serving America in World War II.  He was perhaps best known for his blazing fastball evidenced by his nicknames - Rapid Robert, Bullet Bob and The Heater from Van Meter.

Feller threw 3 no-hitters and 12 one-hitters in his career and won 266 games with 2581 strikeouts, imagine how those stats would have been even better if he hadn't missed 3 full seasons and a big part of a 4th in the prime of his career.
Posted by arpsmith at 3:00 PM