I am still struggling on posting regularly but I am excited my Giants made it into the playoffs.  I have been picking up cards still and have quite a few I will get around to eventually showing but wanted to take a few minutes tonight and put my playoff picks down in the blog so I can see how sharp my prognostication skills might be.

Let's start out in the American League.  The A's travel to KC for the Wild Card game tomorrow. I am very torn from an emotional standpoint on how I would like this game to go.  The A's were my 2nd favorite team growing up (a very distant 2nd) and I grew up in Nor Cal.  The Royals are a great story with their 29 year playoff absence and I have a ton of friends at work who are big Royals fans.  However, I am not going to pick on emotions, Lester will show that Billy Beane made a good pickup and advance the A's into the Division Series.

That will pit the A's vs. the Angels in the ALDS, what a great match up.  Since moving down to So Cal, the Angels have been my distant 2nd favorite team so this is an interesting battle.  The Angels seem to have put it together this year and with the Wild Card game moving back the A's top pitcher, I see the Angels having a pretty easy time with this series and winning in 5 or 6 games.

In the other half of the ALDS bracket there is a great match up between the Orioles and Tigers.  I think the loss of Chris Davis will be too much for the Orioles to overcome and I have a feeling that Justin Verlander may be able to put it back together to contribute leading the Tigers to a win in 6 or 7.

The ALCS will end with the Tigers edging out the Angels for another trip to the World Series.

The National League Wild Card game on Wednesday pits my Giants versus the Pittsburgh Pirates.  No emotional struggle here.  My heart and mind say that Madison Bumgarner will continue his strong playoff pitching (and maybe drive in a run or two) and the Giants will prevail on the road.

The other NLDS match up pits the Boys in Blue against the Cardinals.  Two of my least favorite teams and we will see if the highest payroll in baseball can beat the team with the self proclaimed best baseball fans.  As much as I hate to give credit, the Dodgers are playing pretty well and I see them ending the Cards season in 5-6 games.

Wow, could you imagine a playoff series with the Giants vs. the Dodgers to go to the World Series?  I dare to dream, that would be awesome.  The even year magic will outplay and outlast the highest payroll in baseball in a hard fought 6 game series, despite great pitching from the best pitcher in baseball, Clayton Kershaw.

Before sharing my World Series winner (I am sure the suspense is killing you) I thought I needed to show a couple cards.  The Giants farm team has been consistently rated low by all the experts but they wouldn't be in the playoffs without the contributions of several guys called up from the minors.

One of those guys is back up Catcher Andrew Susac, I was able to pick this Leaf Draft auto up of his for a very reasonable price.  Not the greatest design ever but a solid looking card. 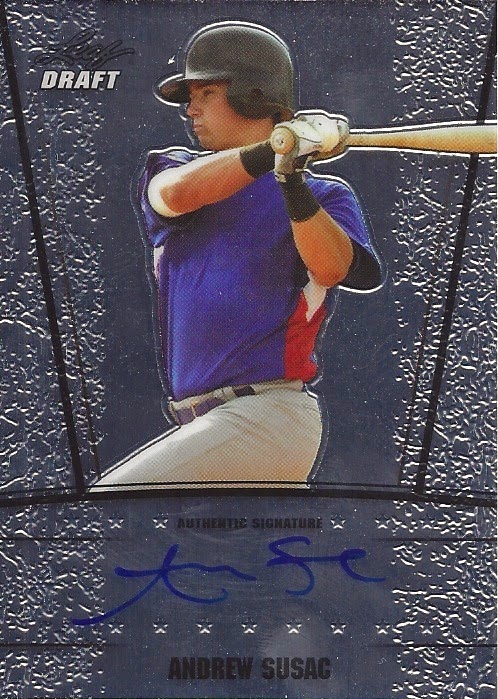 I was lucky enough to pick up this card right before he got called up.  A nice die cut autographed card serial numbered 02/25 of starting second baseman Joe Panik.  This is a sweet looking card of the man who came up and solidified a troubled position and ended up hitting in the number 2 whole and batting over 0.300 on the season.  Very happy to have this in my collection. 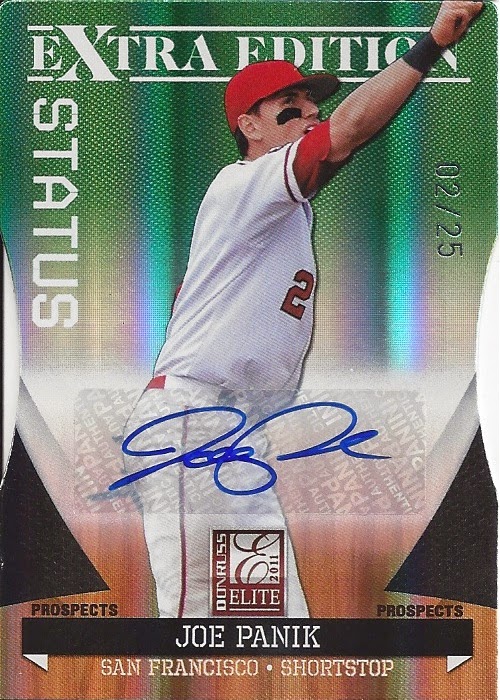 In case you are wondering who I am going to pick to win it all, I will surprise you all and select the Tigers Giants.  The men in Orange and Black will dominate October for their 3rd win in 5 years and bring another trophy home to the Bay Area!


***My disclaimer, if I was betting any cash on the playoffs, I would have the Nationals beating the Giants and going all the way to a World Series crown.
Posted by arpsmith at 12:49 AM 3 comments:

It has been a couple weeks since I have posted, just been busy with work, family and Cub Scouts - I am now the Assistant Cub Master for my boys Scout Pack.  In addition it has been nasty hot and humid in So Cal and my card/computer room is the only room on the 2nd floor.  Despite the lack of time, I have been able to swing a couple awesome trades.  Tonight I thought I would share the latest, a trade with Brad from Brad's Blog.

Recently Brad broke his annual case of Topps Chrome and I followed along closely.  Part of it was to check out what great cards he would pull and part of it was just living vicariously through him.  I have a dream to buy a case of something some day but I am not sure it will ever happen.

Ultimately Brad was able to finish an extra set and I asked if he was willing to trade it.  We quickly made a combined card/cash deal and without buying a pack, I have my complete 2014 Topps Chrome set in its 220 card glory: 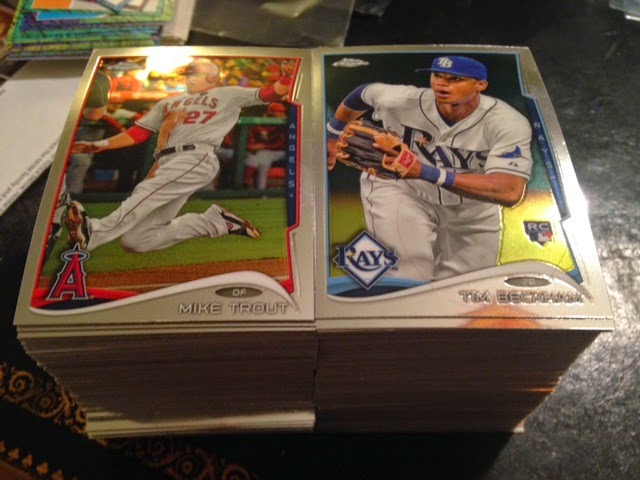 If any of you have traded with Brad, you know he is a generous guy and guess what else he included in the trade: 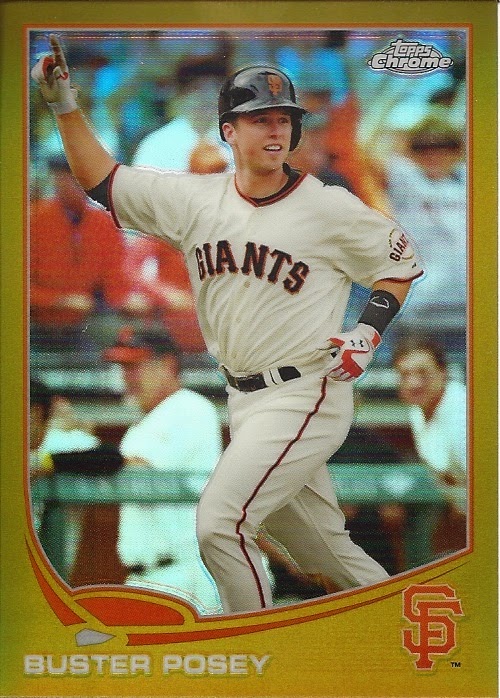 A 2013 Topps Chrome Buster Posey Gold Refractor!  It is serial numbered 17/50 and is a great addition to my collection.

Thanks for the great trade Brad!  I need to load up on some more Phillies for our next one.
Posted by arpsmith at 11:30 PM 2 comments:

I was looking through my folder of scanned cards that I haven't posted and ran across a dozen cards that caused me to pause and think about how I collect and why they were cards I targeted and purchased. Take a look at these dozen cards: 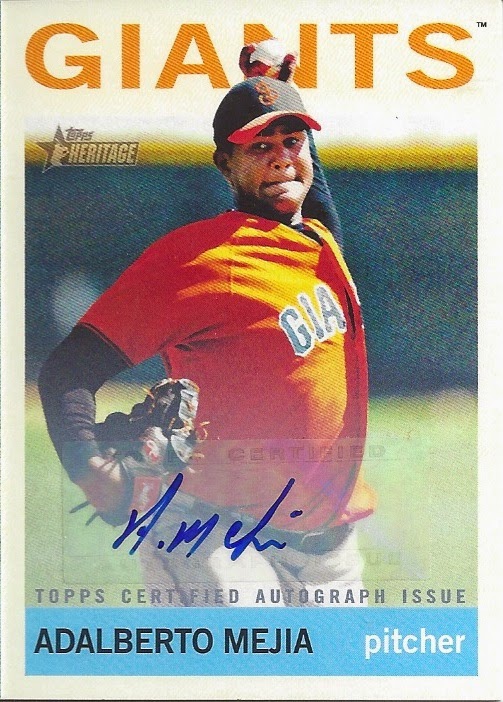 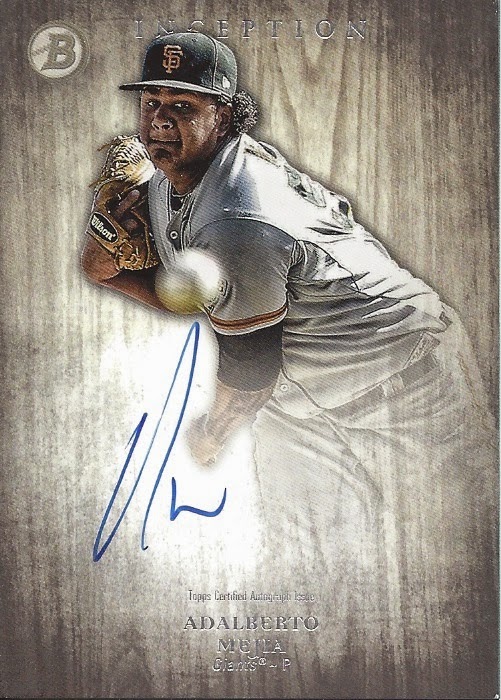 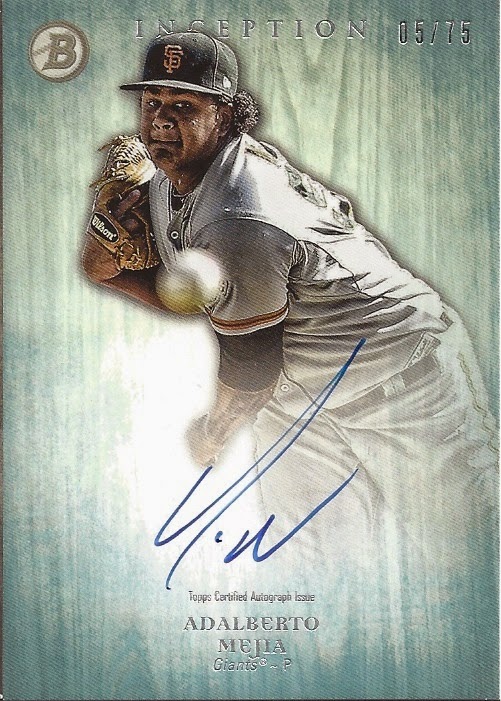 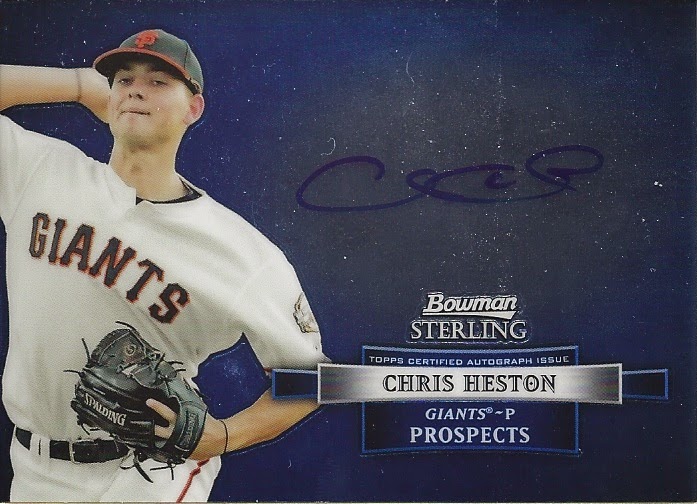 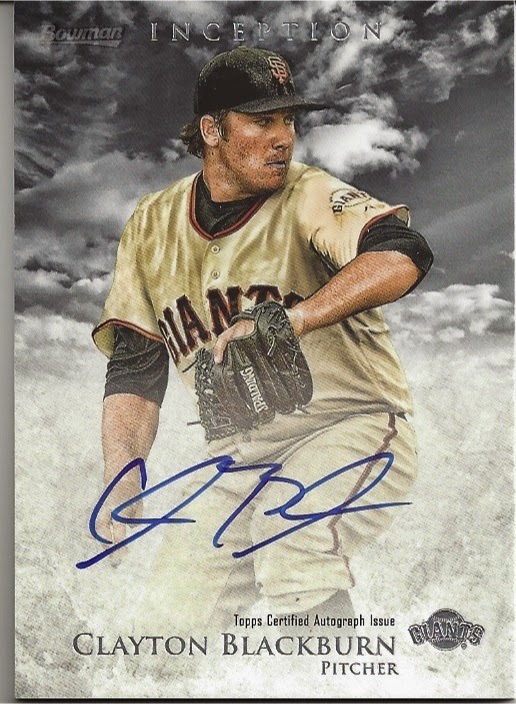 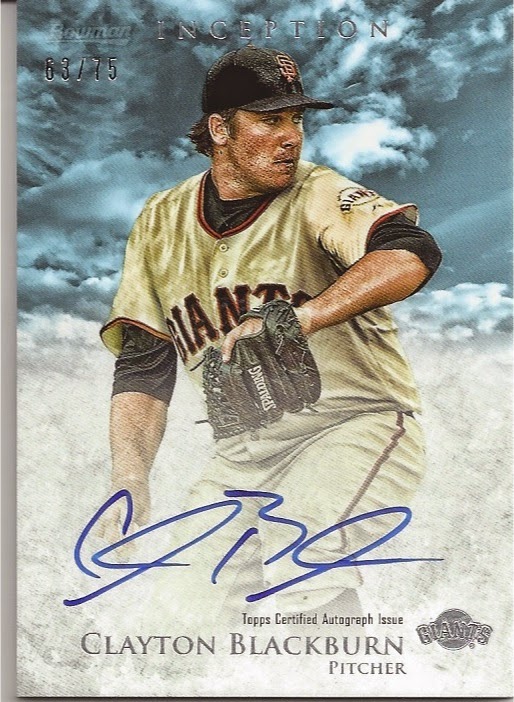 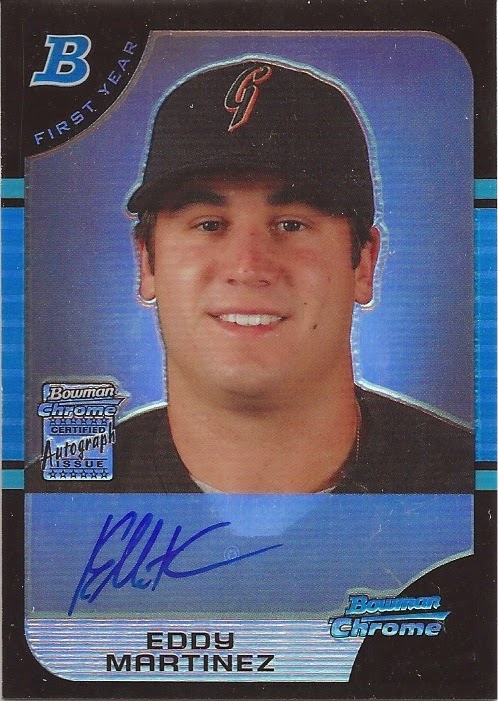 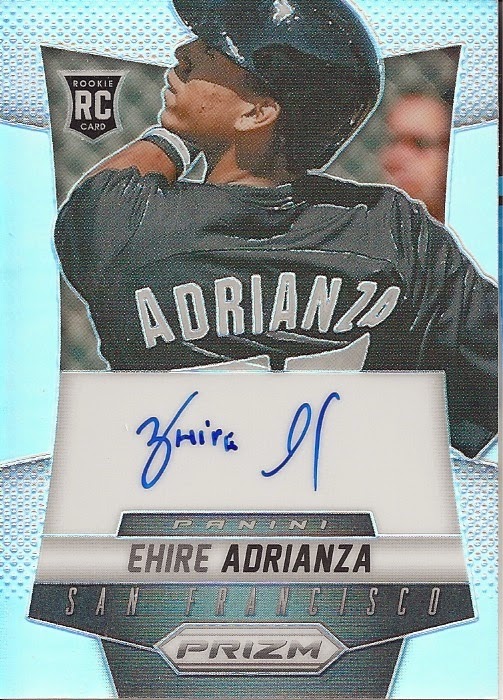 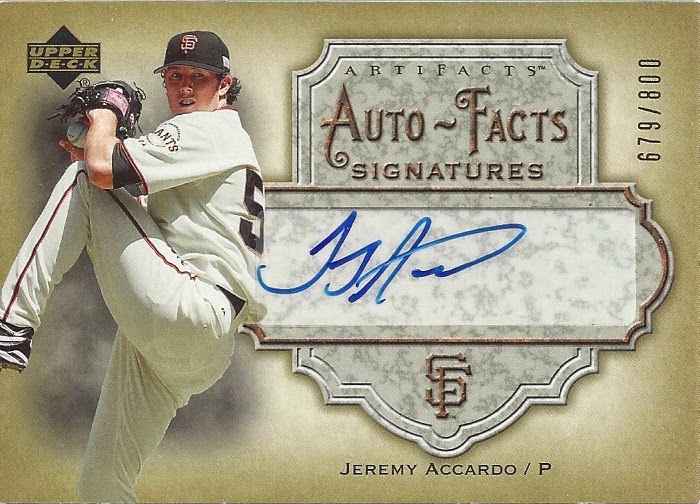 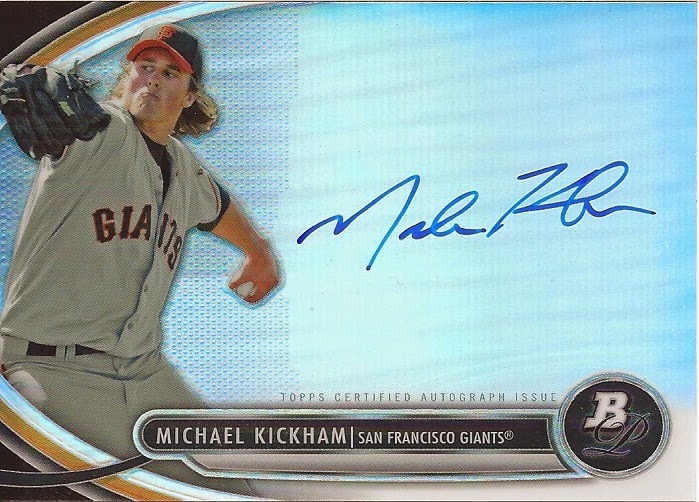 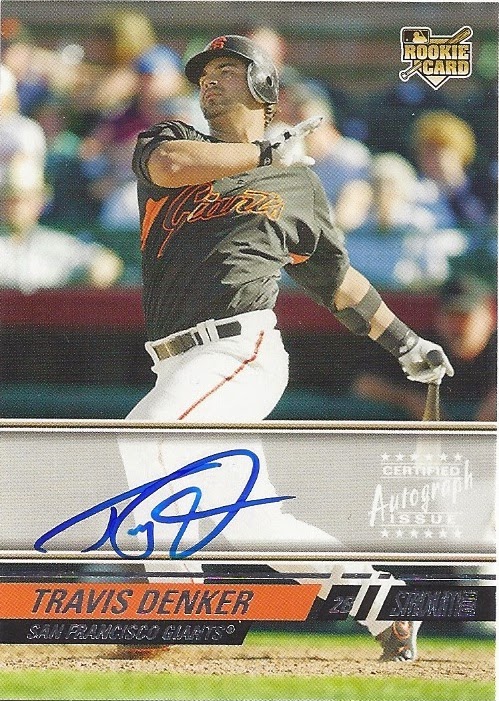 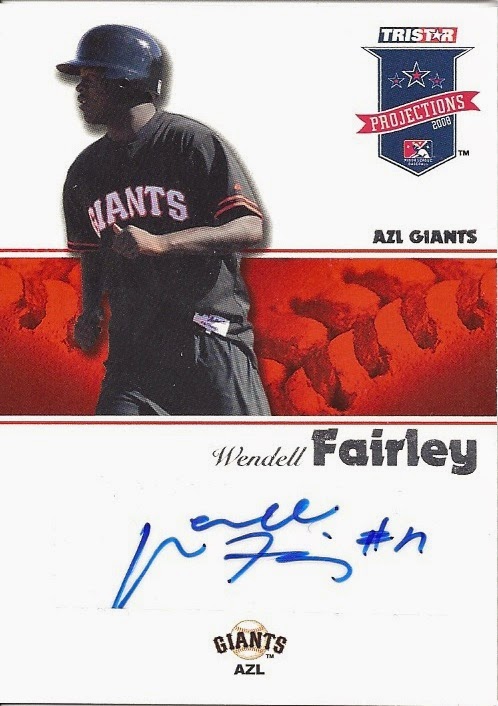 We have the appearance of some nice shine with the Heston card, the Martinez refractor, the Adrianza Prizm and the Kickham Platinum.  We have some beautifully designed cards with the Mejia and Blackburn Bowman Inception cards.  The Mejia Heritage card features a sweet Orange jersey while Fairly is a nice minor league card.  Toss in a Denker Stadium Club and Accardo Artifacts from a couple decent looking sets and you get to your dozen.

While many of these cards have some eye appeal, that isn't why I added them to my collection. The names are not and will not be household names so that can't be it.  The answer is that I have a sickness, no matter what the card, who the player, I want to get my hands on one of every card that features a Giant.  I love adding a quality card to my collection but I realize I am almost an equal fan of quantity as well.

Team collectors, do you fall into the same category? Non-team collectors, are there other ways you collect that are similar in nature?
Posted by arpsmith at 11:35 PM 7 comments: