Mark over at This Way to the Clubhouse is working on completing the entire Series 1 Walmart blue border set.  I had picked up quite a few blue borders and contacted Mark to work out a trade.  Here are the awesome goods I got in return: 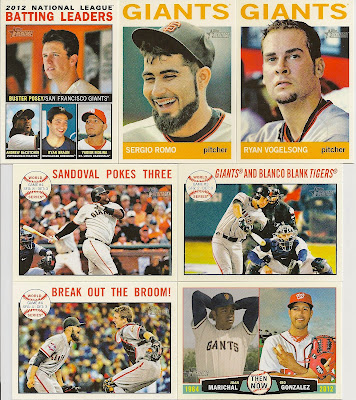 First up, a nice batch of 2013 Heritage Giants.  I still need quite a few Giants to finish this team set but scoring this group of 7 sure helped a lot.  I got 3 of the 4 World Series highlight cards showcasing Giants wins in the sweep, it is so much fun having your team win during the following season of card releases!  The Gio Gonzalez matches the two starters up since they both had 21 wins in the featured year.  I guess there have been bigger stretches in trying to connect past then and now duos. 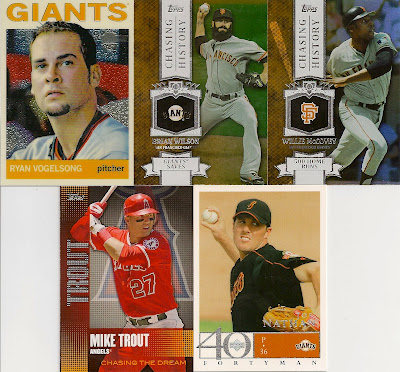 Here is another grouping of cards from the trade, a somewhat random assortment but quite cool. The Vogelsong is a Chrome parallel to 999, I have now picked up about half the team set.  The two Chasing History cards are the shiny retail parallel version. Not totally sure how I feel about 3 versions of these cards but glad to have these two.  The Trout was the last Chasing the Dream card I needed for my insert set and the UD-40 man was a need straight from the want list.

Maybe the coolest part of the trade were these 3 coins from the 1990 Topps Coin set.  I love me some oddballs and needed these for the Giants collection. The Kevin Mitchell is pretty cool with the starts and blueness of the coin.

Thanks for the great trade Mark!  If you have any Walmart blue parallels head over to Mark's blog and see if you can help him out.
Posted by arpsmith at 9:20 PM 2 comments:

Next up in the countdown is slugger and HOFer Harmon Killebrew.  I have always considered Killebrew to be somewhat underrated, the dude hit 573 HRs in his career! There seems to be quite a few mixed opinions on this 1968 design, personally I kinda like it.  The mesh design isn't super exciting but seems to work by allowing the colors on the card to stand out.  I also like the colored circle containing the team name and position.  This was a very cheap Sportlots pick up, something in the neighborhood of a couple bucks delivered and I am very happy to this vintage Killer card in my collection.