Several months back I ran across a company, Burl's Sportscards, that was breaking vintage sets.  They sell slots based on the number of cards in the set.  A random draft is completed and you get the cards that correspond to your slot. 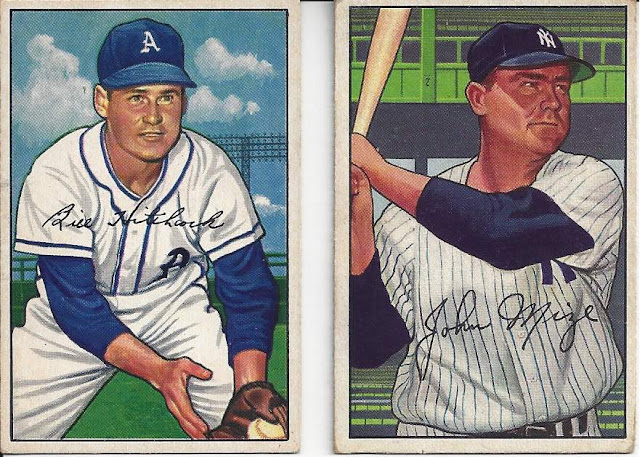 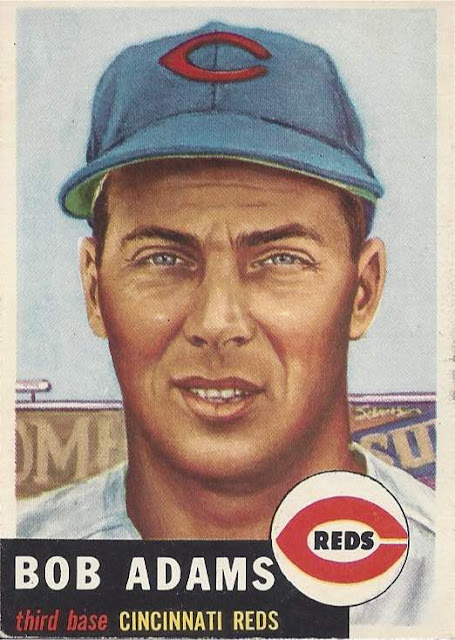 The Mize was a pretty nice pickup but I didn't really do so well.  I had taken a break for a while, tempted by a 1952 Topps break but hadn't pulled the trigger in quite a while.

A couple weeks back, I was lucky enough to check my personal email during the work day and see an announcement on a vintage break of cards from various vintage sets.  There were 50 cards and 50 slots for $25 each.  The big score was a 1963 Topps Pete Rose rookie.  I decided to pick up two slots and while I wasn't lucky enough to score the Rose, I did get two pretty nice vintage cards. 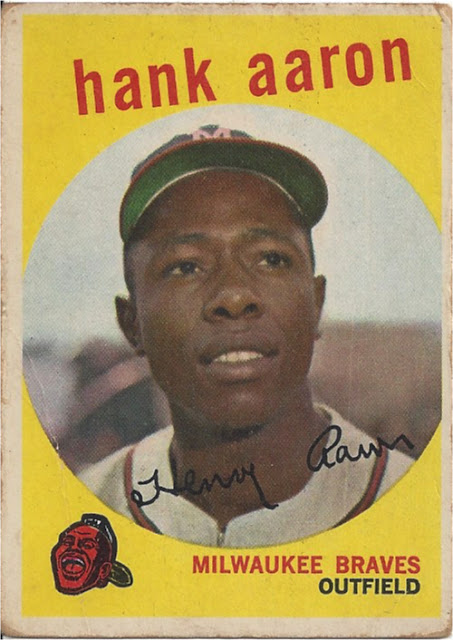 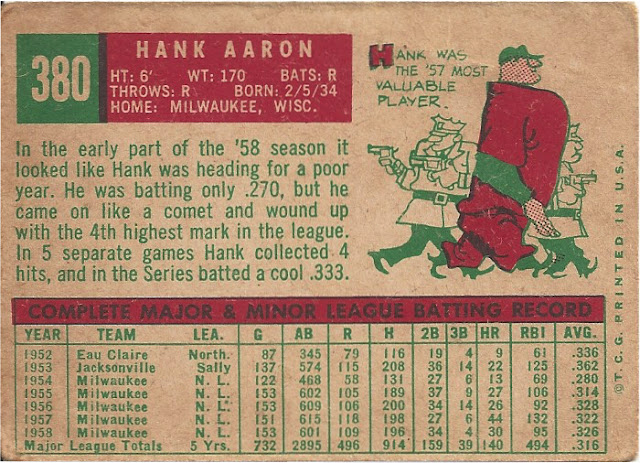 First up is a 1959 Topps Hank Aaron card.  The condition on this card isn't great.  You can see the corners are not sharp at all and there is a crease on the left side through the Braves logo. 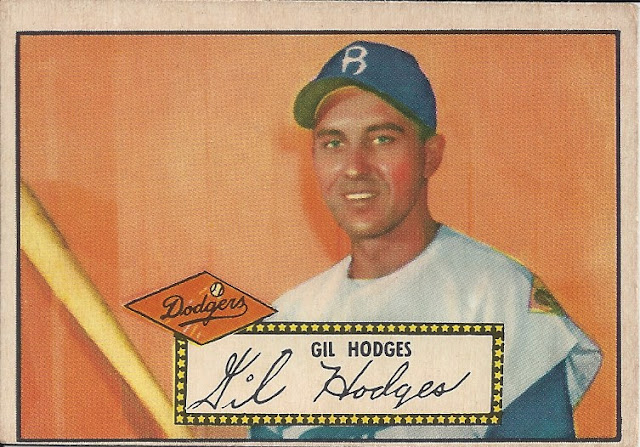 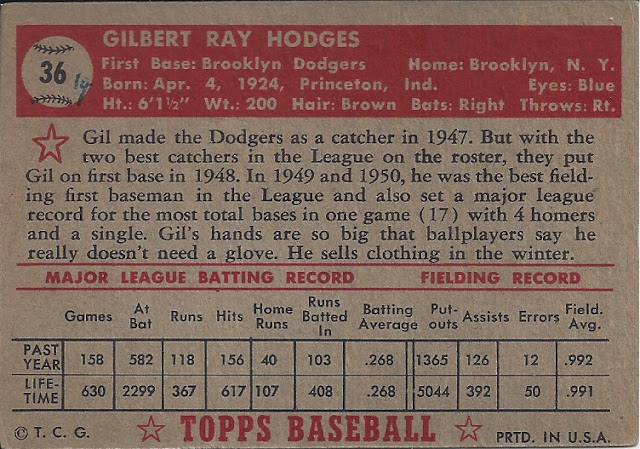 My second card is a 1952 Topps Gil Hodges.  The card is off center a bit but the corners and color look great.  The primary flaw is a pen mark near the card number on the back.  A small flaw for a very nice looking card.

I plan to keep my eyes open for more of Burl's breaks, lots of fun with a change of a big score
Posted by arpsmith at 11:09 AM 7 comments:

I Am a Fan of Fan Favorite Autos

Topps Archives has had a very weird release this year.  The retail version has been out for weeks but I don't think the hobby version is out yet.  I bought a few retail hangers and was thinking of picking up a couple boxes and building the set.  I got impatient and bought the 300 card base set, have started picking up some of the short prints, bought both McCovey cards (the base and SP) along with purple and silver parallels of the base and have the entire Giants team set of base cards on the way.  There is a lot of the retail product out there.

Each year I get excited to see if any of my Giants favorites are on the Fan Favorites Auto checklist and I did a little victory dance when I saw this year's list.  Former Giants closer Robb Nen was listed as having a 2001 Topps themed autograph.  I set up a search on eBay and was a little disappointed to see the card was a redemption.  I bought one, got it, scratched the code and redeemed it online.  Luckily it was a quick turnaround and I got the card last week. 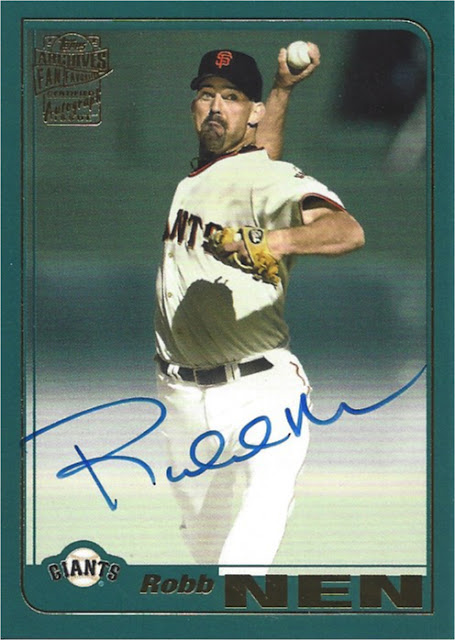 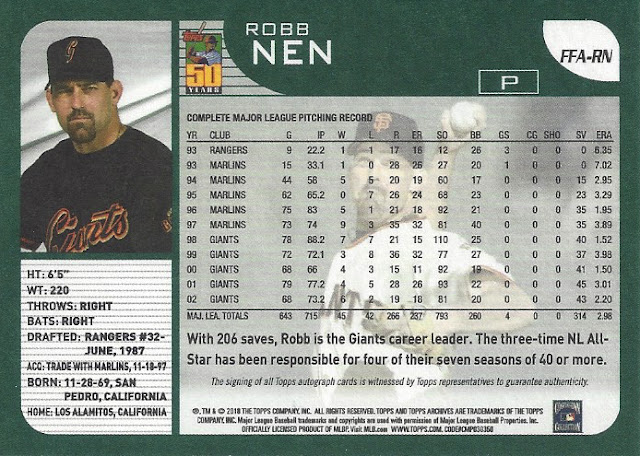 I really like this card, nice representation of the 2001 Topps design, perfect player selection, solid photo selection, career stats on the back and a good clear autograph.

Archives is a set I have collected most years and have typically picked up a couple hobby boxes.  Yes I want to build the set but the primary driver is the presence of 2 Fan Favorite autos per box.  I have very rarely traded/sold/gotten rid of any of those autos.  Many of them are designs I collected when they came out and the new pics on familiar players is always a nice surprise.  More than once I have thought about starting a collection and going after all the Fan Favorite Autos but that thought quickly dissipates when I look at the lengthy checklist peppered with some pretty high valued cards each year.

With JT Snow released in 2015 and Robb Nen this year, two of my most wanted Giants have shown up in this set.  Some other guys I wouldn't mind seeing in a Giants uni on Fan Favorites Autos would be Jeff Kent, Shawn Estes, Rich Aurilia, Greg Minton, Jack Clark and Johnnie LeMaster come to mind.

Anyone you are hoping to see as a Fan Favorite auto member?