My favorite player of all time is Hall of Famer Willie McCovey.  I have amassed a collection of over 1300 different  McCovey cards since I started collecting him in the late 1980s.  I will show off one of my favorite cards most Mondays.  Stretch was one of the most feared hitters of all time and I am excited to show off my collection.

Once again this collecting year Willie McCovey has made an appearance in a few new products. This is great for keeping my player collection alive and having the ability to add new cards to my collection.

Today I thought I would show 2 recent pick ups: 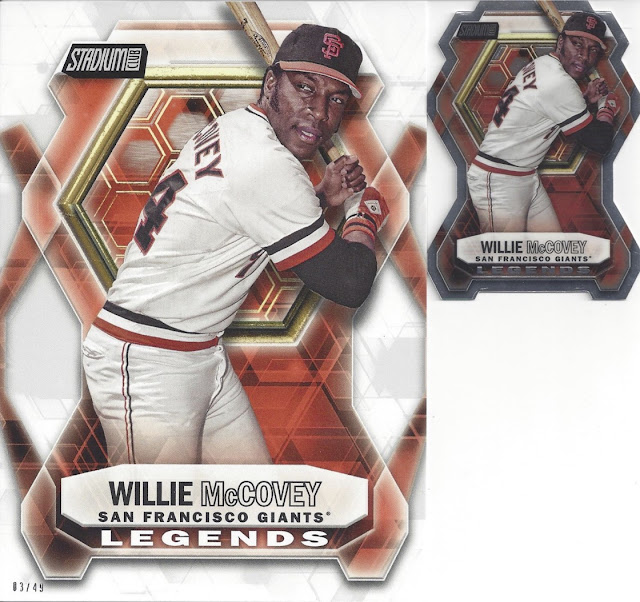 These are both categorized as Stadium Club cards but the smaller of the two is the only card actually included in the pack release of 2016 Stadium Club.  It is a die cut insert from the Legends series.  It has a nice chrome finish and the die cut follows the background design nicely.  I am really happy that McCovey made an appearance in this set as the checklist is only 10 players long. I also picked up a Reggie Jackson for my player collection of him.  This was an insert set I contemplated collecting but decided to just go with my 2 guys.

The larger card is a 5x7 card that I believe was sold through Topps.com.  I picked it up on eBay.  There seem to be a ton of these 5x7 cards being produced and I think there are some 8x10s as well. I am not sure how I feel about these.  I have picked up a few but I don't feel compelled to seek out every last McCovey out there of these.  As you can see in the bottom left corner, these are limited and my copy is 03/49.  This card doesn't have the chrome finish nor is it die cut but it still looks pretty nice.

I have realized I have some work to do on Willie Mac's 2016 releases, might be time to do some shopping.
Posted by arpsmith at 10:06 AM No comments:

Time Sure Does Fly

Just realized it has been over a month since I posted.  I am still trying to adjust to life in the Midwest with my new job and all the other changes that come with a move.  I haven't been able to figure out a good way to carve time out for blogging.  Interestingly my wife stopping work has resulted in me having less free time.  She used to go to bed early and I would have time for my hobbies, now she stays up later, we spend more time chatting and actually watch TV and movies together.   Good for the relationship, not so good for hobby time.

I have gotten some great packages from fellow bloggers over the last few weeks that I will hopefully get around to posting soon.  I have been able to carve out enough time to burn through my monthly budget on cards so I have plenty of blogging material and fun things to show.

My Giants were not able to turn that even year magic into a fourth World Series title in four years which wasn't a total surprise with their lack of bullpen and second half collapse.  I am over the disappointment and actively cheering for the Indians to win it all.  As I reflect back on the Giants season it was a pretty good one and I have high hopes for next year.

Our starting pitching looks like it is in great shape.  With a top 4 of Bumgarner, Cueto, Moore and Samardzija our rotation will be one of the best. I have been following Moore for 2-3 years now as I have him in my keeper fantasy league and I believe the combination of Rightetti and AT&T Park will make him almost the 3rd ace of the rotation.  It hurt a little giving up Duffy in the trade but I have confidence Nunez will fit in well for the entire season and provide some speed in the lineup.  We have Matt Cain and a trio of young guys that will fight for the final rotation spot.  The rotation should be the  strength of the team.

The infield is rock solid with Belt, Panik, Crawford and Nunez and of course the best catcher in baseball in Buster.  If Pence stays healthy, right field is locked down and while some fans aren't in love with Span, I like what he brings to the team.

That leaves holes in left field and a majority of the bullpen.  With the Giants resources, they should be able to plug those holes and be reloaded for a deep playoff run next year.

To celebrate the year, I thought I would share the Giants Wild Card set of cards from Topps Now: 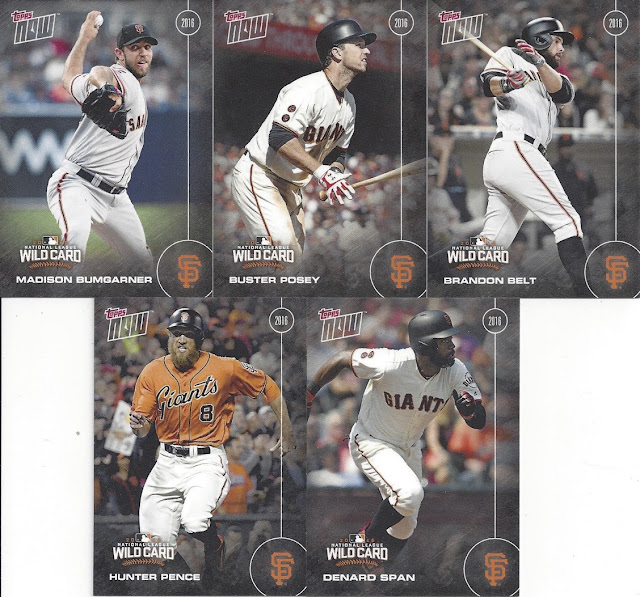 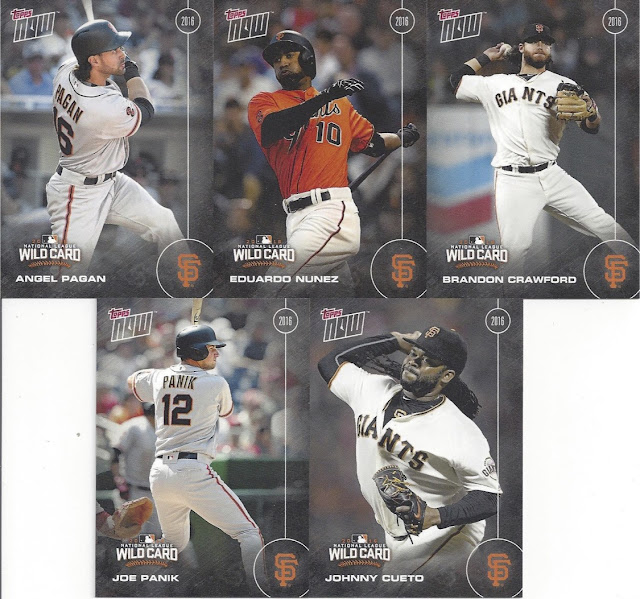 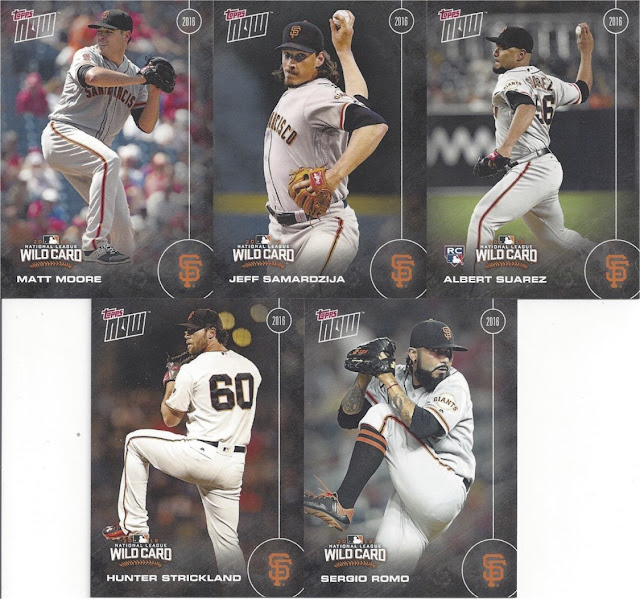 I have to say this is a pretty nice looking set but I did get caught up in the excitement and paid more than I probably should.  I have seen quite a bit of commentary on the Topps Now cards on several different blogs.  While I was initially not enamored with the set, I found myself getting caught up in the Topps Now universe. Outside of this set I only bought about 2-3 cards directly from Topps but found myself seeking them out on eBay.

I was doing pretty well having accumulated the first 20 Giants cards from the set but have slowed down recently getting only 2 of the final 12 cards.  Probably time to hit the Bay and see if I can find the rest for reasonable prices as it would be a cool team set (although pricey) to complete.

I am hoping to figure out a way to post more regularly and keep up with everything else.  Thanks for all the recent card packages and I will eventually get some stuff back out your way.  Under 5 months until pitchers and catchers!
Posted by arpsmith at 2:06 PM 1 comment: