After picking up a couple of nice player cards (Ted Kluszewski and a Rocky Colavito RC) and a majority of the team cards from 1957 Topps in a local estate auction late last year, I decided to start the long quest to complete the set.  My typical vintage set building approach has been to buy large lots of commons on eBay or at an LCS to knock off a decent percentage of the set then start filling in the more expensive cards.  I know the Mike Schmidt RC was my last 1973 card and I believe my last 1975 card was the George Brett RC.

I decided to take a different approach with this set and try to focus my set build start on some of the more expensive/valuable cards.  While I know BV isn't accurate for a purchase price, I thought I would use it as a gauge for what cards to pursue.  The auction purchases were a decent start with the Klu booking at $80, the Rocky at $160, the ChiSox team card at $120, the Dodgers at $300, and the Reds and Giants at $160.  The goal I set was to pick up 12 cards (1/month) that have a book value exceeding $100.  After the auction purchases, I was left with 30 cards fitting that level and I am off to a pretty good start with 6 but I have only blogged about 1 so far.  Right now 3 of them are sitting in my COMC inventory and I still need to blog about 1 but a card that came in today's mail jumped to the front of the line.

In my 2019 Collection Goals post I shared that there were 10 cards valued at over $500.  I finally pulled in my first off this list and I wanted to share it: 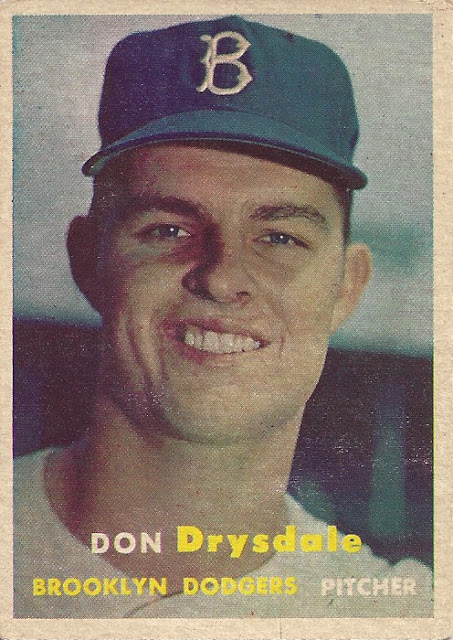 This is the rookie card of Dodgers HOFer Don Drysdale  I had just gotten my annual work bonus and decided (with spousal permission) that I was going to consider splurging on a card or two and that happened to coincide with this card showing up for auction on Sportlots.  There was a bit of a bidding war but I was able to bring it home for what I thought was a very nice price, especially considering the condition.  It isn't perfect but the corner wear is minimal, the centering is pretty solid and the surface isn't too bad.  For a card that is 62 years old, I think it looks amazing. 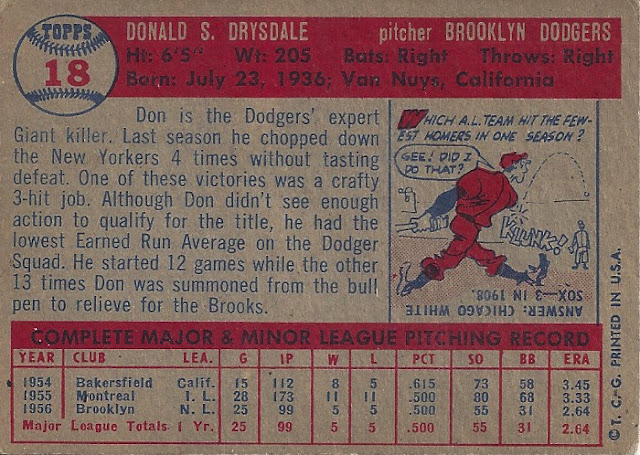 I thought since this was a 1 card post I would share the back as well.  Don had a solid first year start to his career but it went up from here.

I am hoping to bring home one more of the biggies in 2019.  I am currently in a Sportlots bidding war with another person for a really exciting card.  I haven't decided what my limit is yet which is dangerous, I just want to win.  I can promise you that despite my sporadic blogging of late, if I bring the other card home it will jump to the front of the blog line as well.
Posted by arpsmith at 9:03 PM 7 comments:

A couple weeks back, Wrigley Wax posted about picking up the 2019 Cubs Topps Factory set.  I had already ordered my 2019 set but in the post he mentioned that he had picked up every Cubs set since they started in 2006.  I remember a few years back trying to fill in the gaps in my collection but falling a bit short.  I decided to check my collection and see which sets I was missing.

I discovered that I was missing 3 sets, 2006, 2007 and 2009.  I did some eBay searching and was able to find the set from 2009.  I couldn't find the other 2 sets and set up eBay search alerts in hopes that they turn up. If any of you happen to run across either set I am still missing, let me know as I would really like to get the full run.

Here is the set as it arrived: 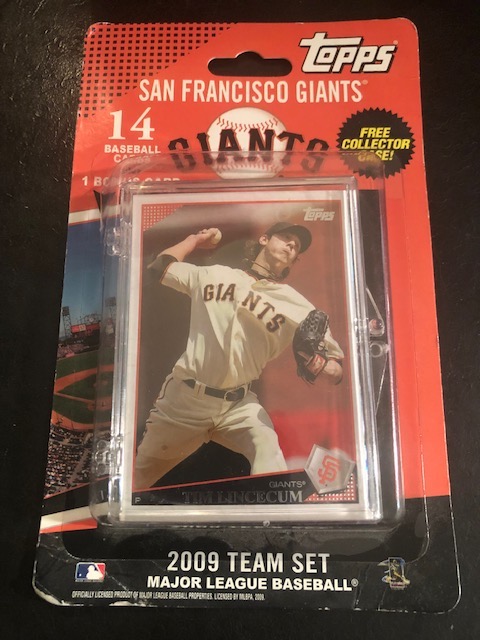 The first few sets of this I kept packaged up but one day I decided to crack them all.  I think it was a play to help them retain their value but why have cards if you can't enjoy them.  Plus how do you enjoy cards when they are sealed up.

I don't recall any of the other sets coming in snap cases, I wish they did as I always get concerned opening up the packages.  Recent sets feature mostly cards with the same photos as the flagship sets.  Occasionally there are a couple of different photos or cropping so I decided to compare this set with the 2009 flagship Giants base cards.

My comparison didn't start off well as the Tim Lincecum features the same photo.  I decided to take the opportunity to share the card backs that are the same as the flagship cards with the exception of the card numbering.   The next 2 cards feature different photos.  I like both Rowand photos, probably preferring the team set showing off his unique batting stance.  Both Cain cards showcase him preparing to unleash a pitch in his home uni  The team set card is cropped a little better in my opinion.

We are 3 for 3 in different photos in this grouping.  Molina's team set card features the first road uni in either set.  Good photos all around in all 6 cards, the only upgrade in my opinion is the Fred Lewis card, I like that his entire body is included on the card, his flagship card could have been improved with a slightly zoomed out photo.

The Jonathan Sanchez card is only the second repeat in the first 9 cards.  I prefer the team set Panda and the flagship Unit cards from this grouping.

Wow, 3 more new photos and all 3 are nice new photos.  The Brian Wilson photo in the flagship set has always bugged me, the coloring on his hat is off a bit and it looks almost blue.  Even though the cropping is better on the flagship card, the better coloring makes the team set card my favorite of the two.

The final 3 cards of the team set feature one new photo and two cards that don't appear in the flagship set.  The Bowker is his only card from 2009 after having 60 cards in 2008.  He is one of the dozens of players to man left field for the Giants since Barry Bonds departure, playing 25 games there for the Giants.  The position doesn't seem any more stable this year with Rule 5 pick up Connor Joe, Yangervis Solarte, Gerardo Parra and already sent down Michael Reed already spending time in left this year.  The inclusion of the stadium photo is the "1 Bonus Card" referenced on the front and I think it is an improvement over the O-Pee-Chee card from the same year as you get a better look at McCovey Cove.
Posted by arpsmith at 7:15 AM 5 comments: