Since 2006, in addition to the Topps Flagship base sets, I have been collecting most of the insert sets as well.  I little while back I decided to fill some gaps in my collection and pick up the Topps insert sets from 1993 to 2005.  While I do have all the base sets in that range, this was a period where I didn't do a ton of collecting.  Most of the sets have been picked up in factory form or bought complete without opening many or any packs.  I have decided to share the different insert sets as I complete them to document my progress and share the sets in case they came at a lull in your collecting as well.

I am a sucker for die cuts and even though this set is small at only 7 cards, I am a big fan. 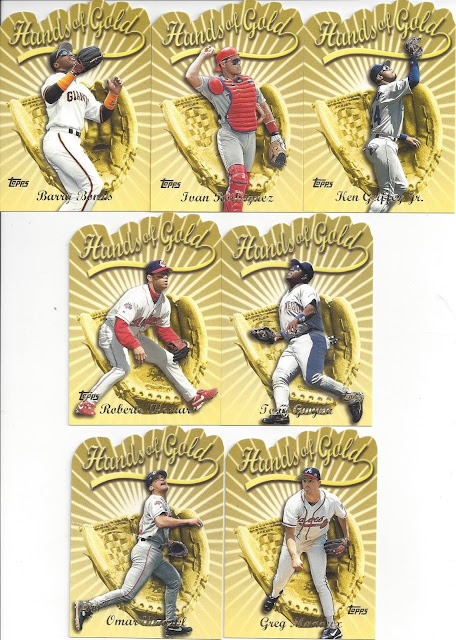 I really like the design of this 2000 Topps Hands of Gold insert set.  In addition to the die cut top, each card features the player in a fielding action photo.  I have seen too many sets that celebrate hitting with a fielding pose or fielding with a hitting pose - Topps got this one right.  One minor complaint I have is the use of the same glove on each card.  It would have been nice to switch it up with a catchers mitt for Pudge and lefty mitts for Bonds, Griffey and Gwynn.  Otherwise a strong showing from my perspective.  All of these players have strong defensive pedigrees with lots of Gold Gloves on their mantle.  The gold coloring and sunshine rays in the background are a great compliment to the rest of the card. 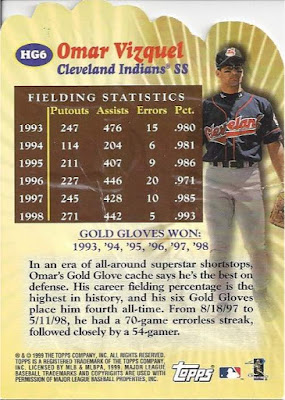 The cards backs are nice as well with another photo and the fielding stats and a listing of the years with Gold Glove victories.  The write up rounds up a very nice card, both front and back.
Posted by arpsmith at 5:57 PM No comments:

First off - Happy Mother's Day to all the Moms out there.  I wrote this post on Saturday and will be off the grid for most of the day spending time with my wife and kids.

Time to finish up my March COMC delivery with a mix of vintage card and hits.  These two types of cards are on the opposite end of the spectrum but I don't want to draw this out any longer.

First up are some vintage San Francisco 49ers: 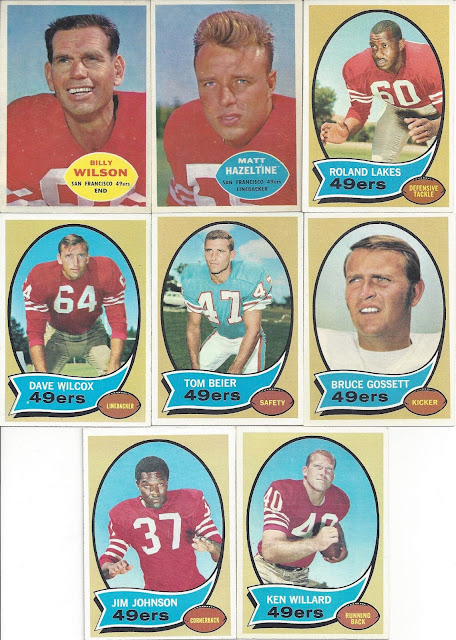 Some cool cards here from the 1960 and 1970 Topps sets.  My energy in going after the vintage 49ers has been strong of late but I was looking to mix up my purchase a bit and found these vintage beauties at very reasonable prices.  I really like the design of the 1960 set and now have 4/10 49ers.  This is a team set I would like to go after based on the aesthetics.  These 6 1970s matched with the 2 I already have get me to 8/10 49ers.  I am not as big of a fan of the design but my new closeness to finishing off the set will make this one a target as well. 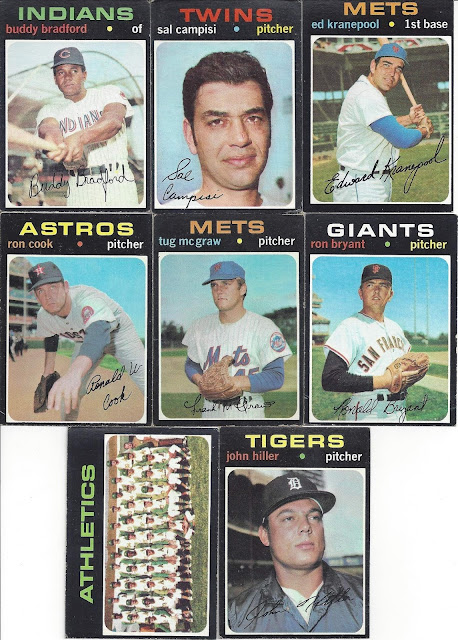 Next up are 8 cards for my 1971 Topps set.  Since these acquisitions I have been aggressively seeking out the last few cards I need to finish it off and I hope to have a celebration post in the not too distant future.  No huge names here but a outside of the Sal Campisi card, I really enjoy the photos on all these cards. 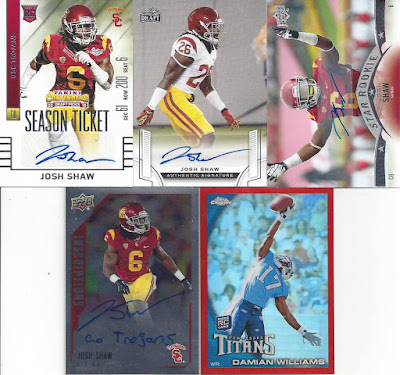 Now moving on to the hits portion of the post.  I liked watching Josh Shaw play DB for the Trojans and found a quad of his auto cards on the cheap.  I really like the shiny one with the Go Trojans inscription.  I also like the fact he is wearing his USC uni in all the photos.  You may recall a story about Shaw in which he lied about how he injured his ankles saying it was rescuing a drowning a kid instead of an odd escape from his girlfriend's apartment balcony.  Not the greatest character but he went to my school :-)  The final card is a 2010 Topps Chrome parallel, not exactly a hit.  I was going for the Trojan rainbow back in 2010 which was a pretty daunting feat with 14 different players each having 8 cards (I wasn't going after the 1/1s).  This Damian Williams orange completed that color and I also have the base cards complete. Still missing 1 refractor, 6 x-fractors, 8 purples, 7 blues, 11 gold and 13 reds.  Kind of a crazy goal to shoot for back then but decided to at least finish off one of the colors. 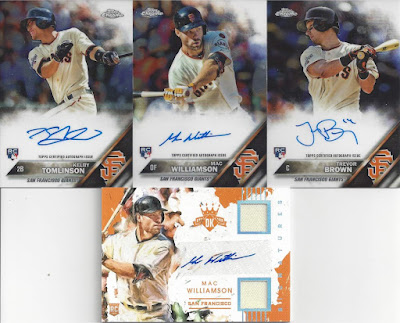 Now for some Giant hits.  I was able to pick up all 3 of the Giant Topps Chrome autos for under $2 each.  The lack of value in these hits is the primary reason I haven't gone after any hobby boxes of Topps Chrome in a few years.  The odds are so long to getting a card that makes it worth while.  I now pick up a few packs of retail to get my pack busting fix then seek out any Giants I decide to go after.  The Williamson Diamond Kings card was really cheap as well and is a nice dual relic with an auto.  Pretty solid design on that card with the nice Giants orange in the background. 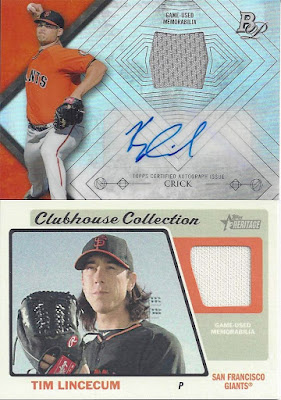 My final two cards are an auto relic of perennial Giants prospect Kyle Crick and a Heritage relic of The Freak, Tim Lincecum.  It doesn't look like Crick is going to pan out but I could resist picking up this card.  I am planning on putting together a checklist/want list of the Giants Clubhouse Collection relics so this was a nice addition.

I have one more COMC order that I had delivered after this one (my Christmas scratch off free shipping wins made it easy to do) and will probably get another delivery as well soon to finish off the 1971 Topps set - I cannot wait until Black Friday to get those last cards in my hand.
Posted by arpsmith at 10:00 AM 2 comments:

I am closing in on finishing up my 1971 Topps set which has me pretty excited.  I am also working on the 1969 and 1972 Topps sets.  The 1969 set needs include mostly higher dollar cards that I am slowing looking to see if I can find some deals on.  The 1972 set needs are almost all from the last 2 series and I have very few from a very tough high series.

In all honesty, I struggle to see how I am going to finish the 1972 set with my miserly ways - I find it hard to pay double digits for a base card of a non-star, particularly when the last series contains 131 cards.  A few weeks back I ran across someone who does vintage set breaks.  You buy a slot in the break and he does some randomizing and matches the purchased spots with different cards in the set.  I saw a 1972 Topps set break and thought it would be worth jumping on.  I thought it would be great to land on a star like Ryan or Clemente or Mays or Aaron but my primary thought was knocking a card or two off my high number want list.

I ran some quick math in my head, 787 cards in the set 131 high number cards, so the odds show I should get a high number card on out of every 6 slots.  I really wanted to get at least one but didn't want to break the bank so I jumped in on 10 slots for a total of $30.  Here were my results: 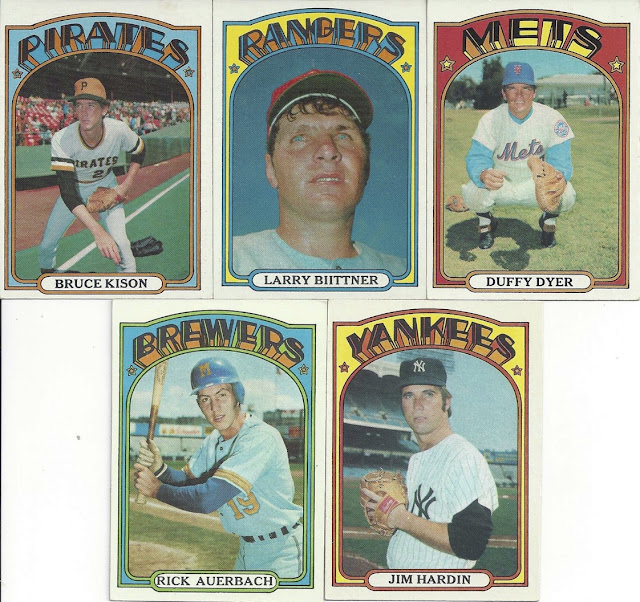 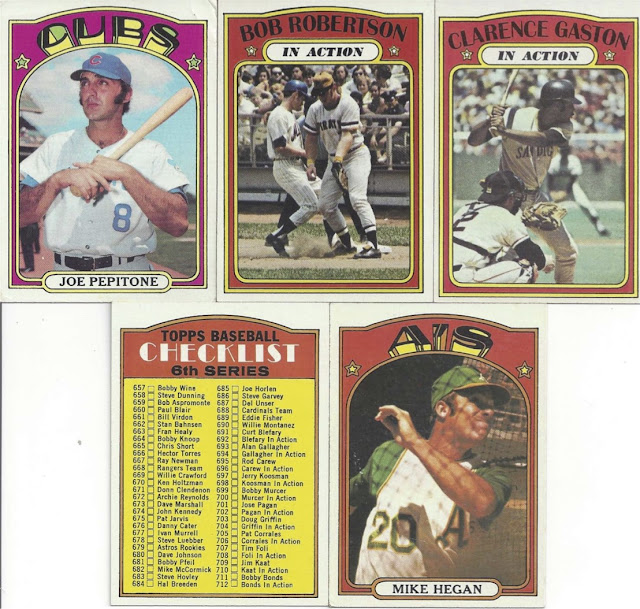 Well, you can see I didn't pull any stars and I will save you the effort of looking up any card numbers and share that I didn't pull even one high number.  The small saving grace is that I did need the checklist card and a couple of these were slight condition upgrades.

I don't blame the seller, he did everything on the up and up and everything was live streamed and recorded.  It was just my dumb bad luck and more evidence that leads me to the conclusion that my 1972 Topps set may never get completed.
Posted by arpsmith at 2:04 PM 6 comments:

I have been on radio silence for over two weeks now so I thought I better knock out a quick post to make sure everyone knows I am still around.  Work and personal life have thrown me a couple curveballs lately, got the work one under control and still working through the personal one.  I really want to jump in on the 30 challenge that has been floating around but need some time to pull and scan some cards to make that happen - we'll see.  In the meantime, I thought I would share my biggest and smallest cards from my March COMC order. 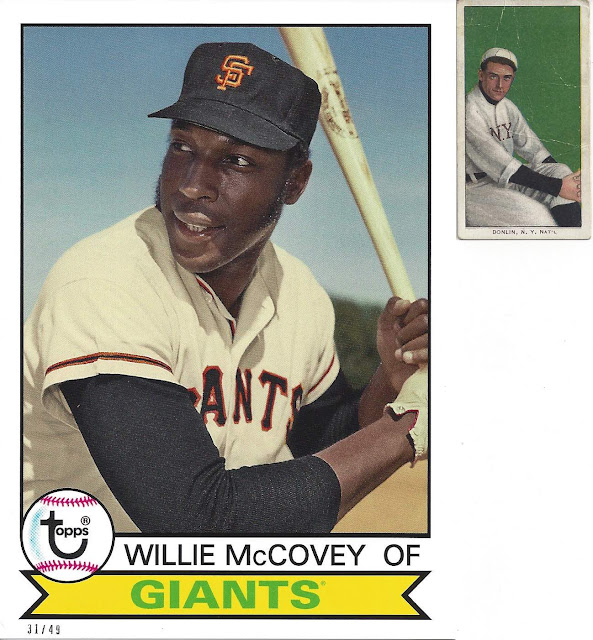 I scored a nice 5X7 of Willie McCovey from the 2016 Topps Archives set.  As a team collector, I am not a fan that Topps has decided to put out these 5X7 and 8X10s of virtually every base and insert card but as a player collector I have had some fun picking some up.  This is the standard version numbered 31/49, there is a gold /10 as well.  But the biggest score of this shipment is another addition to the T206 Club collection, my second different card from Mike Donlin. 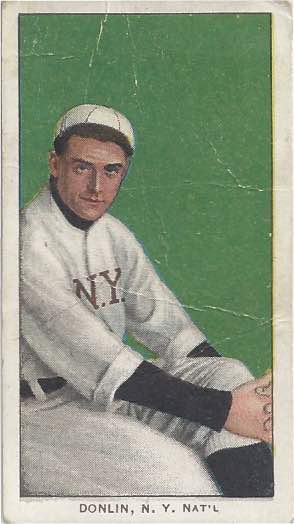 I have one more post from this shipment, prepare for some vintage cards and Giants hits.  Hoping I find the time sooner rather than later, Happy Collecting!
Posted by arpsmith at 12:55 PM 3 comments: