I received my first Giants card from the Topps Living Set this week.  It is of Giants rookie pitcher Dereck Rodriguez.  If you haven't been following the Giants this year, Rodriguez has been a very nice story.  He is the son of HOF Catcher Ivan Rodriguez.  The Giants acquired him as a minor league free agent in November of 2017 after the Twins organization released him.  They brought him up in late May of 2018 as injuries overtook their pitching staff.

He made his MLB Debut on May 29th in relief against the Rockies giving up 4 runs, only 1 of those earned.  That was one of only 3 appearances across 18 starts and 2 relief appearances to date where he gave up 4 or more runs.  He has only pitched fewer than 6 innings in all but 3 of his starts and has been one of the most solid pitchers on the Giants staff.  After a rough outing this weekend against the Cards he still has an ERA of 2.50, a WHIP of 1.084, 88 Ks and 33BB in 115.1 innings pitched.

On Giants sites, he is being touted as a Rookie of the Year award candidate that just isn't realistic, others have had better seasons. However he is having a very nice season and gives some hope for the Giants in the future. I have watched several of his games and he pitches with a maturity and confidence.  He seems to have pretty good stuff as well.

Here is a look of the front and back of the card: 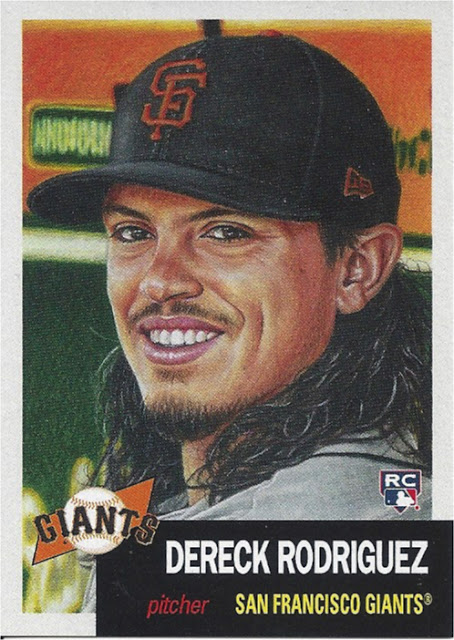 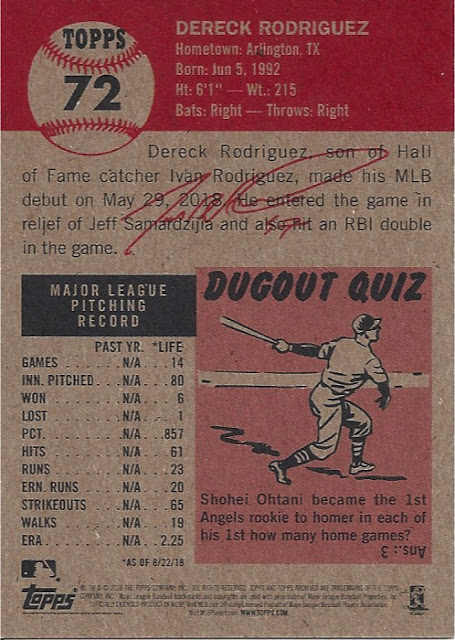 As you can see, the cards are modeled after the 1953 Topps design and I like them quite a bit.  They are standard size cards and the art work is done by an artist named Mayumi Seto.  The backs are a pretty good representation as well down to the cartoon work and facsimile autograph.  The idea is that a player will only be represented once in this set unless he changes teams.  Theoretically the set can go on forever hence the Living Set name.

Topps is up to 84 cards right now and Rodriguez is 2nd Giant.  Unfortunately Joe Panik was the first at card #2 and despite close to 2000 of them being sold a major premium is being placed on the first 3 cards.  Panik's are going for well over $100 and I didn't pick one up early enough.  I could see going $25-30 maybe but it could be a while before one drops that low.  I did pick up a Rickey Henderson card a little while back, there are some retired players in the mix as well.

I haven't been as diligent as usual in reading blog posts throughout 2018 so forgive me if this is a question already asked.  What are your thoughts on the idea/concept behind Topps Living Set?  Have you picked up any cards yet?
Posted by arpsmith at 11:25 AM 8 comments:

I Am All Fired Up!

A couple weeks back 2018 Topps Fire was released.  I believe this continues to be a retail only product and I saw some hanger packs at my local Target and picked up a couple up right around release day.  I put together the base set last year because I really liked the design and found this year's fairly similar.  I looked on eBay for a base set (seems this has become my default for set "building" of new sets lately) and didn't see anything that seemed reasonable.

A few days back I stopped into the same Target for a couple household items and walked down the card aisle.  I saw 3 boxes of Fire priced at $69.99.  Knowing I have a Red Card that gives me 5% off and would cover over half the tax I decided to splurge on a box (I have a knack at self justification).  I came home and cracked open the box.  It was a lot of fun, I pulled some good rookie cards, a couple of guys for my collections and a few decent parallels.   The hits weren't great but I was still enjoying the look of the cards.  Here are some of the better base cards and the two hits. 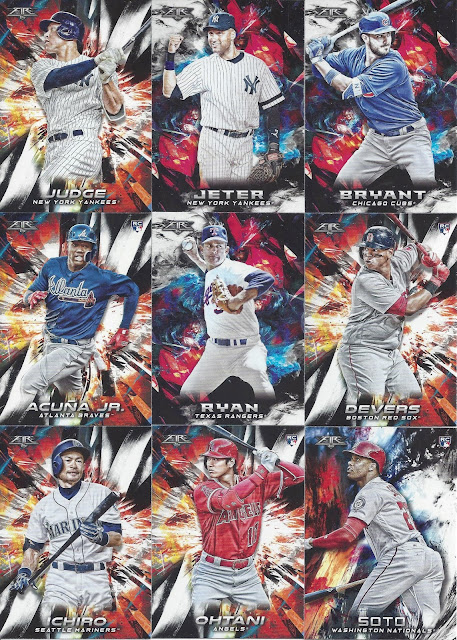 The box yielded most of the hot rookie cards and some nice veterans. 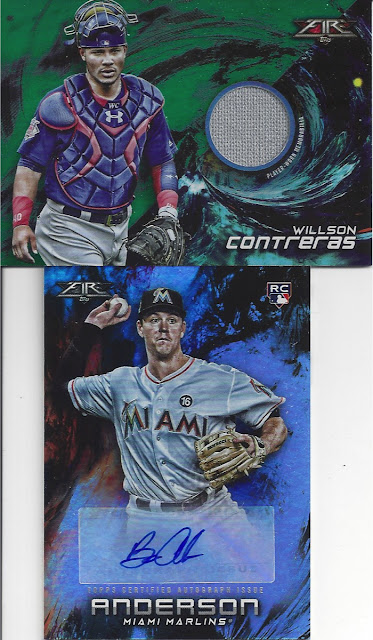 The Contreras card is numbered 24/75, I think I have pulled a few of his cards in the last couple years.  Outside of killing the Giants this year, I am not sure Brian Anderson has done much, not the greatest auto.

After sorting the cards and giving it some thought I was still debating on going after the set again this year.  I did some eBay searches for lots of base cards and didn't find anything that seemed to work.  Sportlots base cards start at 18 cents each and needing close to 100 cards, some of them stars plus shipping didn't excite me as a potential path to completion.  Finally earlier this week I decided that I was going back to Target, if one of the boxes was there I was going to buy it.  If not I was going to see if I could work some Sports Card Forum trades then hit Sportlots.

To my surprise, both boxes I had left behind days ago were still there.  I picked up the one off the top and turned.  I stopped and thought of how terrible it would be if I got a box with most of the same base cards and decided to put the box back and pick up the other one.  When I got home that night it was a busy one and I put the unopened box on my desk.  The box ended up marinating for 2 days which almost never happens for me.

I had made a list of my base needs before cracking box 2 and once I did start opening the packs I started comparing my cards to the list.  The first pack yielded no duplicate base cards; same with pack 2 and 3.  Pack 4 had 2 duplicates but I was pretty excited, looked like I had picked a good box.  I kept this up as I went through the box and the want list kept shrinking.  My excitement grew and I was very pleased I decided to go with a second box.  In the end, my want list has shrunk to 4 base cards and technically it could have been two as I had pulled a Dave Winfield and Andrew McCutchen out of my first box for my player and Giants collections.  I quickly went onto Sportlots and for less than two bucks had my last 4 cards and the rest of the base I needed for my player and Giants collections on the way.  Here are the highlights of the base in that second box. 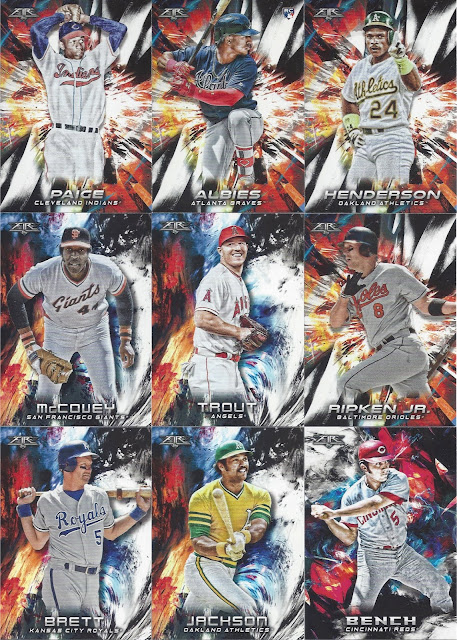 Outside of the Albies rookie, the stars of this box were the veterans and retired players.

When I picked up the box my sole focus was on the base and after the relatively meh pulls in box 1 I didn't really expect much.  In fact I had kind of forgotten about the hits as I opened it as I hadn't gotten one until pretty deep in the box.  With about 6 packs to go my relic popped and it was a pretty solid one.  Luckily Machado is still featured in his Baltimore orange.  Two packs later I noticed a redemption towards the back of the pack.  I played it cool checking the base cards on my want list as I went card by card.  I did decide to do a slow roll to reveal the name on the card and BOOM! 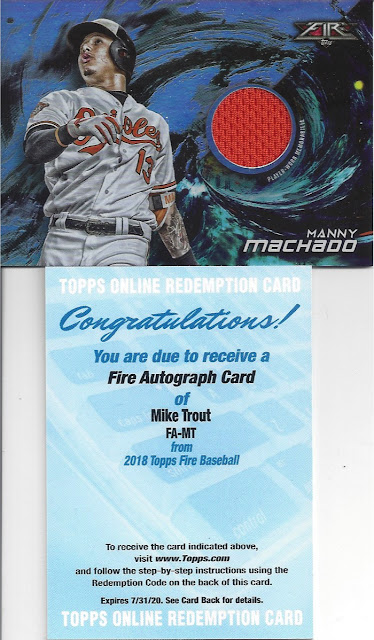 I was in shock, a Mike Trout auto redemption.  While being a redemption isn't wonderful, Trout is pretty tight with Topps so I feel good it will be fulfilled.  This is my first Mike Trout auto ever and once I get it in hand, it will reside in my HOF Auto collection.  I bet the auto on the Fire design will look great and I assume there is a chance it will be on card.  Yeah the dude is only 27 but he is about as much of a lock for the Hall as possible.

I am fired up about the set and the hit, pretty exciting break for me.

I do have a nice stack of inserts and parallels I was planning on listing on Sportlots.  If anyone is interested in trades for them, let me know and I will put up another post with a trade list and some scans.
Posted by arpsmith at 10:32 AM 8 comments:

I Have Some Thank Yous to Pass Out

My blogging frequency has flat lined.  I have found my life pulling me in several different directions and I won't bore you with the details.  My collecting hasn't stalled but the blogging has.  I haven't decided to pull the plug on the blog, however I suspect I am going to need some sort of jolt or resuscitation every so often to produce some posts.

The jolt I needed to produce a post today was some guilt over not thanking some generous people who have sent me unsolicited cards over the past few months.  I love getting packages in the mail and each of these put a smile on my face.

First up was a nice stack of cards from blogger Tom from The Angels, In Order.   I took a little bit of a like to the Angels when I was living in Southern California that survived a bit even after the f*%#ing Rally Monkey during the 2002 World Series.  I am a fan of a number of former Angels like Rod Carew, Reggie Jackson, JT Snow, Bobby Grich, Tim Salmon and Wally Joyner so it is fun checking out there cards when they pop up on his blog.

Here are highlights from what Tom sent: 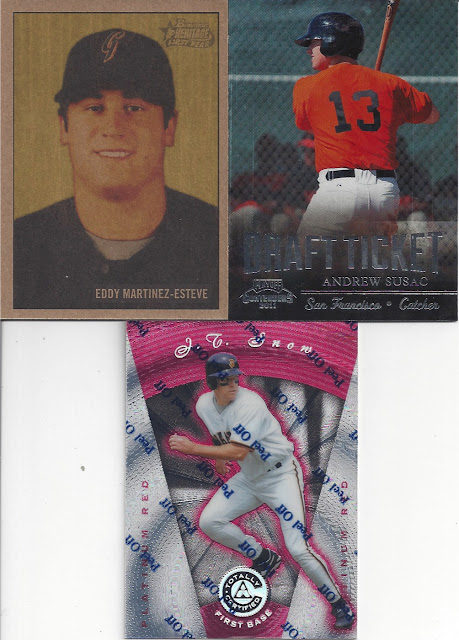 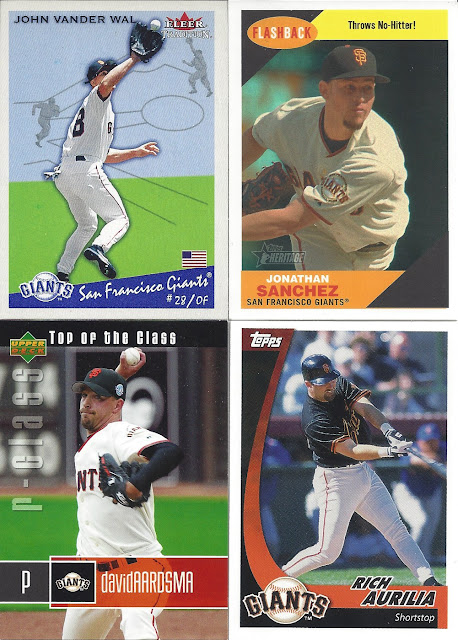 These were all needs and very much appreciated.

Next up some cards from Marc at Remember the Astrodome.  I am bummed I never made it to the Astrodome, it was a dream of mine as a kid.  I addition to Astros, Marc collects quite a few different players as well so I feel a bit of a kinship.  Here are some highlights from what he sent my way: 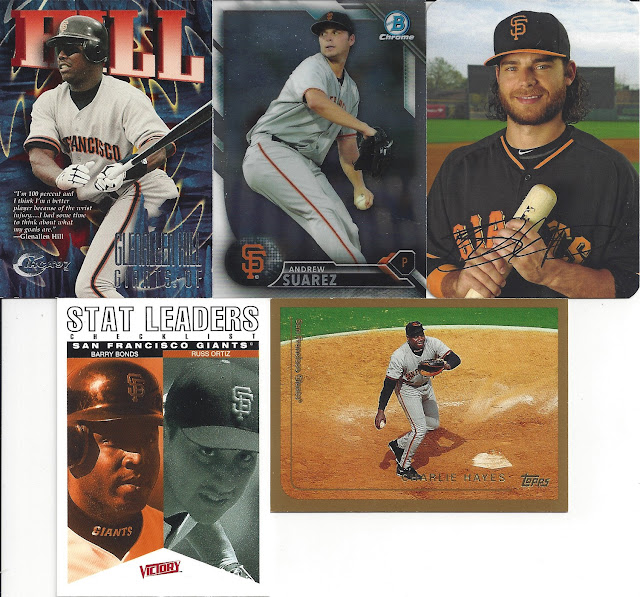 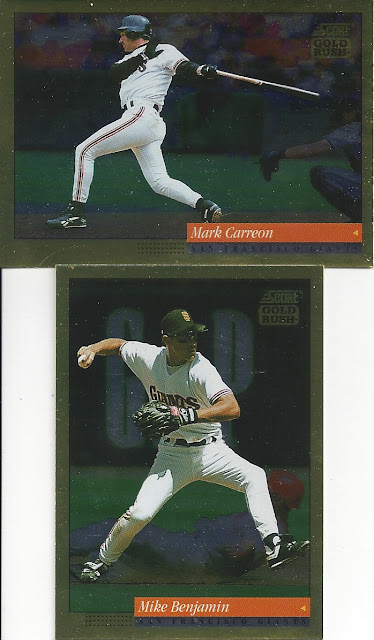 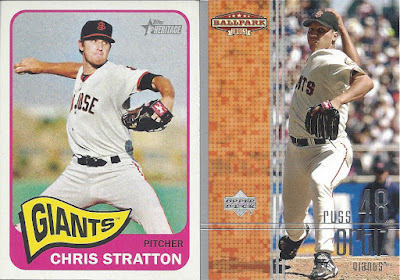 Great stuff and tons of variety.  Particularly like the Score Gold Rush cards.  I have been on a bit of Score kick lately.

The final cards to show today are from Dennis at Too Many Verlanders.  In addition to his Tigers collection, Dennis collects guys from the University of Michigan.  I have been looking to add some of my USC Trojans as of late, I think Dennis and I have fairly similar collection approaches.  Here is what he sent my way in the latest package: 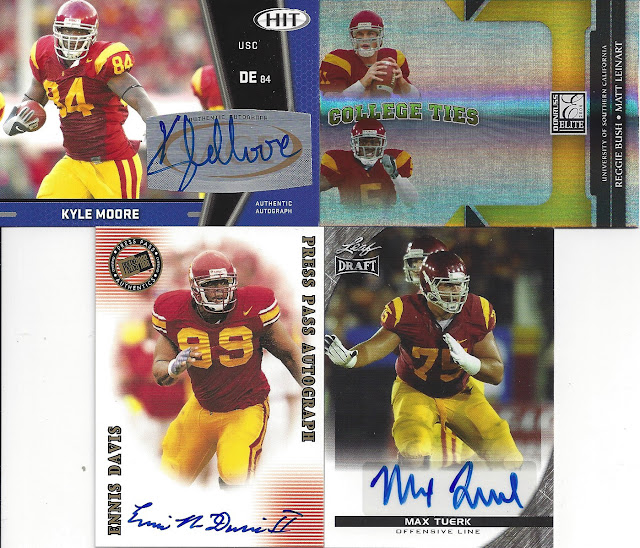 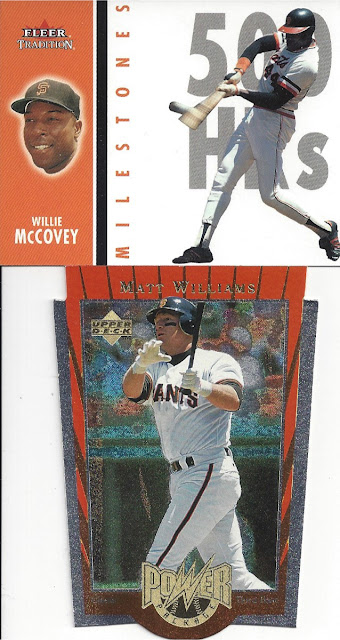 It was a Trojan heavy group and all were needs.  The Kyle Moore auto was only his 2nd card I had in my collection and inspired me to seek out the rest of his cards and I am close to a complete run (9 of 11 non 1/1s).

Thanks to all of you for the packages.  I still have more to share and hope to reengage soon!
Posted by arpsmith at 4:19 PM 8 comments: