Last year I decided to start collecting cards of Giants reliever Reyes Moronta.  I was looking to add a recent Giant to my slate of player collections and was drawn to Moronta for a few reasons.  First, he seemed to have a lively fastball with some decent stuff.  Second, I enjoy his portly physique - I always think its cool when someone who isn't in peak physical condition can excel at a professional sport.  I think Rick Reuschel's stint with the Giants started this type of appreciation.  The third and final reason was due to his inclusion in a couple of higher end products in 2018 as a rookie, knowing that higher end products produce some nice patch cards.

As I am typing this post, I am thinking my intro post to my Moronta player collection should have featured some of these amazing patch cards but that will have to wait.  Today I scanned and decided to share the a few of the Moronta cards released in 2019.

By now I am sure most everyone has heard of the re-institution of Topps Total.  It was a set originally released in 2002 as a 990 card set featuring a deep list of players including a lot of bench players and relievers not featured in many sets.  The set continued as a 990 card set in 2003 then was shortened a bit to 880 cards in 2004 then down to 770 cards in 2005.

This set has been one that I know a lot of collectors and bloggers have desired to be brought back and finally in 2019 Topps obliged.  I am guessing I am not alone in my frustration on how it was released however.  Topps did decide to make the set 900 cards in length which is great but it is an online exclusive and the format is broken down into smaller series or waves. Every three weeks, a fresh batch of 100 cards in the set is made available through 10-card packs. These packs sell for $10 each. I can't even imagine building a full set and haven't even decided to go after all the Giants yet.

I did decide to seek out the Reyes Moronta cards and have a fresh batch of 3 to share, what is a Topps release without some parallels: 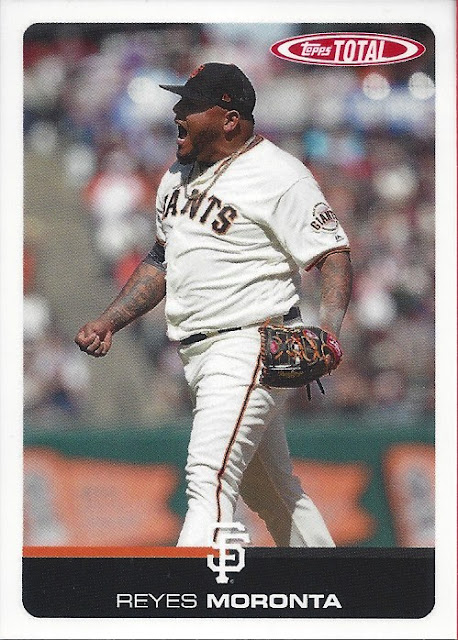 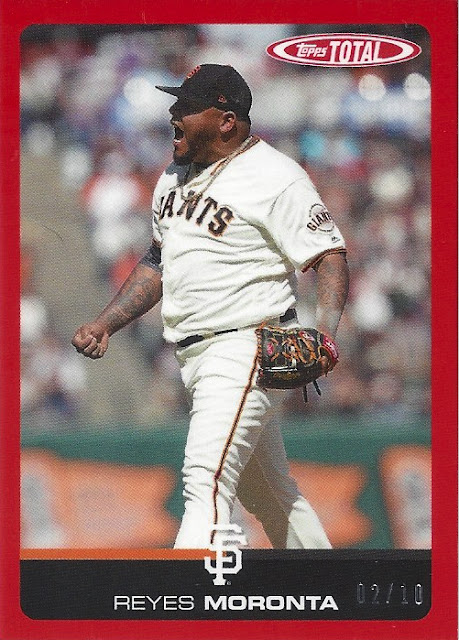 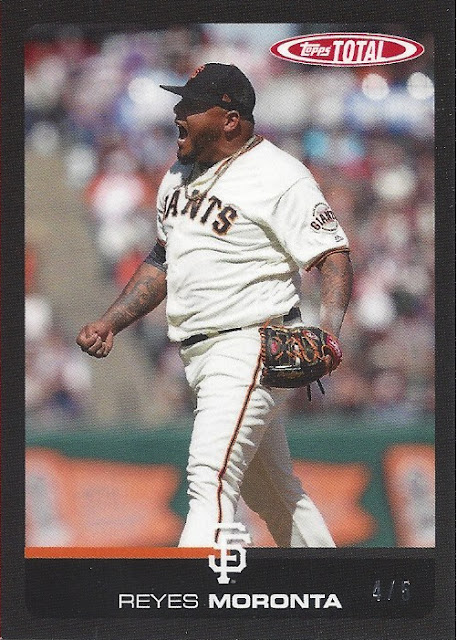 I really like this card!  The design is a great throwback to the original Topps Total cards and nice and simple.  The player is the star of the card. This photo shows off Moronta's impressive physique along with some attitude no doubt after throwing a high 90s fastball by a batter for strike 3.

As you can see I have picked up the base card along with the red parallel /10 and the black parallel /5.  Surprisingly I saw 3 of the blacks show up on eBay before the first red.  There is a 1/1 parallel but unless it shows up and a ridiculously low price my 2019 Topps Total Reyes Moronta rainbow is complete:

Looks great, doesn't it!  If you have any thoughts to share about Topps Total that you haven't blogged about, feel free to share in the comments.
Posted by arpsmith at 3:00 PM