I have been having fun trying to add new items to my Willie McCovey collection that are not cards.  His vintage cards that I need are either super rare (and if I can find them they are pretty costly) or parallels and hits from 2001 forward (I find it hard to pay good money for a cards /25 when I have the /100 and the /10 already).  The main thing I am looking for are vintage items with photos of Willie Mac, ideally pictures I haven't seen before.

I set up a search for magazines and publications on eBay and have picked up a few cool things that I plan to show in the coming weeks.  Today I thought I would start with a unique item, it was the first time I had ever seen it and when I purchased it there weren't any others on sale.

This is a scorecard from the Willie McCovey Old Timers Game played at Candlestick Park on 9/20/80. 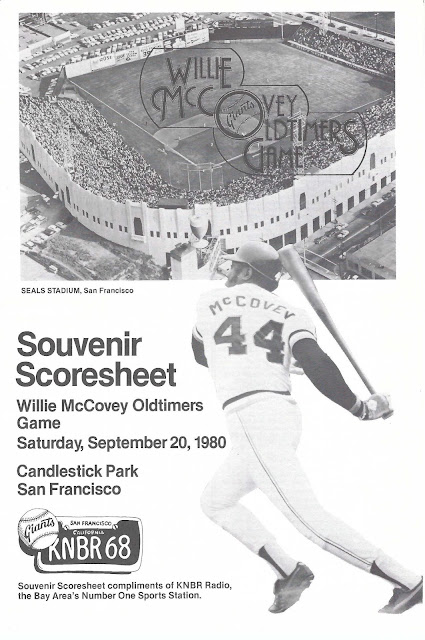 This is the front of the scorecard and measures about 6 1/4" X 9 1/4".  It features an awesome photo of Seals Stadium, the original home of the SF Giants and a cool photo of Stretch in the follow through of his swing with his retired #44 and last name in full view.  He played his last game for the Giants on July 6th, 1980 so they must have rushed to put this together.

A quick side note, I saw Willie's 5th to the last game in person on June 29th at Candlestick.  He hit a pinch hit double against the Dodgers to drive in a walk off run in what would be his last extra base hit, his last 3rd to the last RBI and second to the last hit.  It was pretty wild. 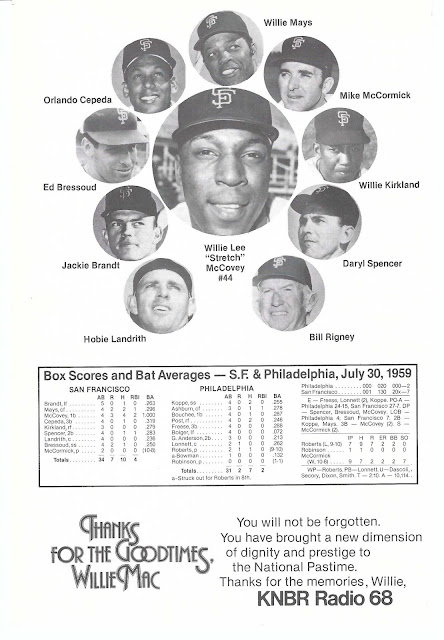 The back shows the box score of a game on 7/30/59 which is Willie's famous debut against Robin Roberts where he went 4 for 4 with 2 triples.   There are also nice round photos of the Giants' starting lineup and manager circling a larger picture of McCovey.

The inside of the scorecard is pretty neat as well: Not only does it have a place to keep score, the sides highlight players that I assume were playing in the Oldtimer's game.  It appears they were able to drum up the same starting lineup from his debut game in 1959 to play against some other former players including Robin Roberts.  I would have loved to see this game.

Stay tuned for some other vintage McCovey stuff.  While they are a little more challenging to scan/photo for the blog, they are super cool to collect and look at.
Posted by arpsmith at 11:00 AM