Introducing Another One of My Player Collections - "The Greatest" Rickey Henderson

When I really started getting into cards as a young kid in the mid 80s I started 2 individual player collections.  You have seen lots of pieces and posts about one, Willie McCovey.  The other big player collection I started was none other than Rickey Henderson, by his own admission, "the greatest of all time."  I recall wandering around card shows looking for any new cards to fit into my player collections and at the time Rickey cards were much more plentiful that those of McCovey.

My Rickey collection actually stands at 1481 cards right now, much more than my McCovey collection that currently numbers 1161 cards.  Over the past few years I haven't placed much attention on my Rickey collection for a few reasons: 1) there are a lot of Rickey collectors and the rarer cards get quite expensive, 2) until the last couple years Rickey wasn't featured on too many new cards and 3) I don't have an unlimited budget and more of my $$$ has been going towards Giants.

One of my goals in 2013 was to make some progress on some of my non-Giants player collections.  I have shared some of my successes in my Vida Blue collection so I thought it was time to pick up a few new Rickeys. 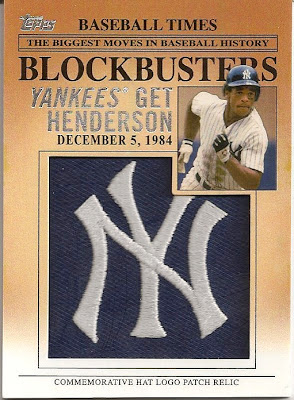 First up is a Blockbusters Hat Logo from last year's Topps release.  I believe these were blaster inserts in the Update release.  May of the trades featured in the Blockbusters subset weren't really blockbusters but as I recall this trade from the A's to the Yankees, I think it fit the bill. 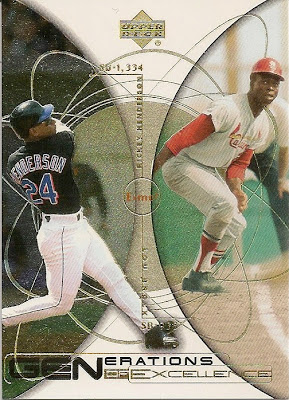 Here is a cool card from Upper Deck that features the top 2 base stealers of all time.  This card was an insert and was put out in 2000.  The design with the E=mc2 in the middle and the lines representing the electron paths around a nucleus are a little too busy for me however I am loving the old school photo of Lou Brock along with the picture of Rickey. 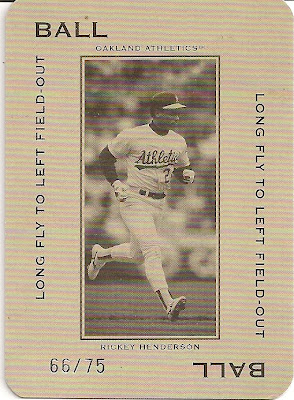 This card is a Throwback Threads Polo Grounds card of Rickey Henderson and as you can see it is serial numbered 66/75.  I got it pretty cheap and was happy to add it.  However this represents one of the frustrations of a player collector and particularly a Rickey collector.  This set has 45 different cards of Rickey with print runs spanning from 5 to 85 so mine is actually one of the more common ones.  This is the only one I have and I doubt I will go out of my way to get another unless I stumble upon some at a really cheap price.  I do like him being featured in an Oakland uniform, my favorite of the many team unis he sported in his career. 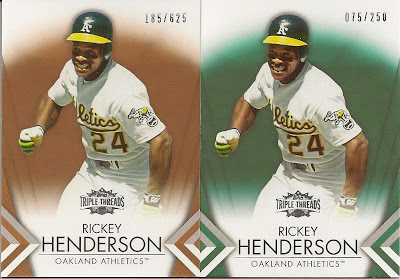 Finally a couple 2012 Triple Threads parallels.  I picked these up with some of the Giants featured earlier this week.  I am enjoying this photo as well and may need to keep my eyes open for the other versions.

So there you have it, my 5 most recent Rickey pick ups.  I am adding a want list for Rickey to the blog in case you happen to have any of his cards for trade.  I have left out all the cards I need from 2002 - 2006 as there are just too many to list for now (he has almost 3000 cards during that time frame).  I don't plan on going crazy with the Rickey's this year but I want to set a goal.  Let's shoot for 50 new Rickey cards in 2013. With 5 in the first month, I am slightly ahead of pace.