Time for Some Giants

As I look back on my recent posting history, I recognized that I have been posting fewer Giants cards than ever.  I think it is driven by my bulk purchasing of base cards for my collection this year and being either unexcited by the actual card designs as I have seen them for years or overwhelmed by a package of 100+ cards and not knowing what to post.  Time to correct course and get back to my roots for a post.

Here are 5 random Giants cards I have picked up recently. 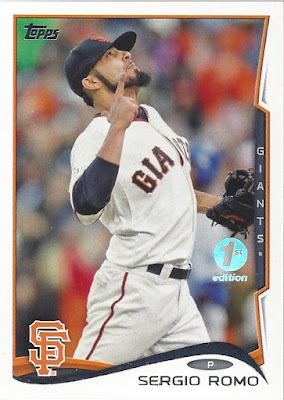 This 2014 Topps Sergio Romo is the 1st edition version, I believe these were short printed to 10 copies of each base card but they aren't serial numbered.  I saw a fellow blogger (sorry can't remember who) show off one of these and thought it would be nice to have one in my collection.  I did a quick eBay search and went after this Romo card.  He has been with the Giants and an important reliever and I think this card shows off a pretty cool picture of his post save celebrations. The starting price was low and I put in a bid that ended up winning it for me.  I don't really have a need to add another but if one fell in my lap I would gladly add it to the binder. 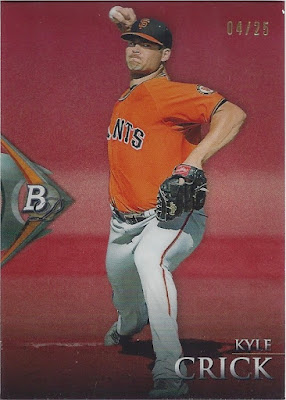 This card was one of those mistake purchases.  Don't get me wrong, I like the card.  The red backing looks nice, the card is numbered to only 25 copies and Crick is one of the Giants top prospects.  However, I got into a bidding war on Sportlots with another buyer.  I was making automatic bids without opening up the auction and looking at the card and was bidding as if the card also had an auto.  I spent under $10 for this but I would have rather had those funds go to 30-40 base cards.  Oh well, time to turn the page. 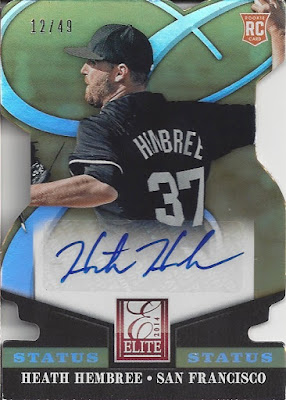 Heath Hembree is no longer with the Giants, he was traded to the Red Sox as part of the Jake Peavy trade last year.  He was once touted as the Giants future closer and I had him stashed in the minors on my fantasy team.  That didn't pan out but I will like the guy.  This auto from 2014 Donruss numbered 12/49 popped up on the LCS bid board and I brought it home for about $3-4, I am happy to have it in my collection. 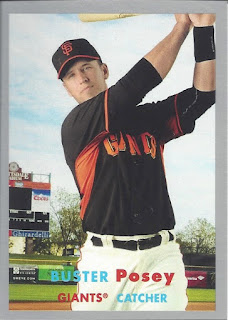 Here is a sweet silver parallel of Buster Posey, the possible 2015 NL MVP.  I love this Spring Training photo, this is one of my favorite cards of the year.  I also have the base and gold version of this so I guess my rainbow is now complete.  This card is numbered 129/199. 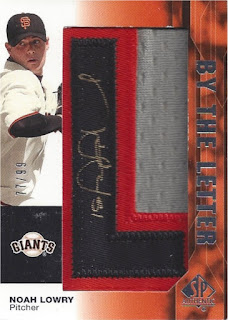 The final card to show off and get my Giants fix is this Letterman Auto of former Giants pitcher Noah Lowry.  Lowry played for the Giants for 5 years and got injured which ended his career back in 2009.  I was always a fan and thought he had a lot of potential.  Apparently the Giants did too as I looked him up on Baseball Reference and he got paid over $9 in his 5 year career for pitching in only 106 games, 100 starts.  My middle kid is named Noah (he was not named for Lowry, we just liked the name) so I always show him any Lowry pick ups and he thinks a Giant named Noah is pretty cool.  This letterman with the Giants colors looks great and is numbered 77/99.

I feel better getting some Giants back into the blog.
Posted by arpsmith at 1:24 PM