Posting has been pretty scarce around here.  I am still getting some cards here and there and have actually completed a couple of trades but time up in my card room has been rare over the last couple of weeks.  I took a trip to Washington DC for work and a couple extra days of site seeing (had a great time and got to knock another stadium off the bucket list when I saw a Nationals game) that took up a week. Also, my wife has been staying up later and we have been hanging out more at night which is great for the relationship but not so much for the blog.  I suspect posting will pick up again soon.

With all my travels and short spots of free time I have been reading quite a few books but most have been of the fiction variety.  I did recently finish up a pretty good book about Christy Mathewson called Matty An American Hero by Ray Robinson.  The book was written back in 1993 and is a solid biography about the Hall of Fame pitcher. 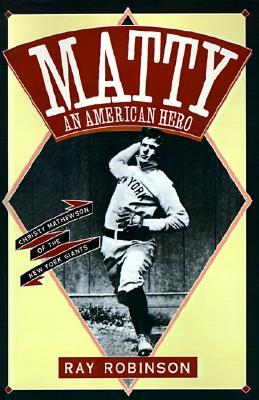 This book covers Mathewson's entire life, which was tragically cut short at age 45 due to tuberculosis that he most likely contracted while serving in the military after his baseball career was over.  Christy was respected by all - his teammates, his opponents, the fans, the umpires - not just for his playing prowess but for the man he was.  He was college educated which was rare for players of that day and was a true hero to his generation.  He was much more than a ballplayer during his era.

As a ballplayer he was dominating and the book recounts many of the big games and pennant runs of the New York Giants.  He was good friends (and roommates for quite some time) with his manager John McGraw.  While the two men were quite different, they had a mutual respect and admiration for each other.

This wasn't the greatest book I have ever read but it exceeded my expectations.  It was well researched and had some solid details I didn't expect from an era so far in the past.  It was a great learning experience to better understand how baseball was played in the early 1900s.  If you are interested in some great insights into baseball in the early 1900s and to gain knowledge of one of the greatest pitchers and inaugural member of the Hall of Fame, it might be worth picking up this book.