My primary goal this year is around filling in the base card gaps in my Giants collection.  Since 2011 when I started my serious Giants collecting, I have made a concerted effort to get every new base card that comes out and despite my efforts there have been a few elusive cards that I just can't get my hands on.

Recently I was going into eBay to look for some of these cards and set up email search reminders and noticed that one seller had the only copy of a couple of cards.  The price was a little high so I placed them in my shopping cart but didn't pull the trigger and commit to purchase them.  The seller then put out a deal for free shipping if you bought 10 or more cards and I decided to jump.  The overall purchase hit on a few different areas of my collection so I thought I would share the cards as a group.

First up the Giants base cards:

The Buster Posey 2011 Tribute card and the 2013 Topps Turkey Red Lincecum were the start of this adventure and knocked off Giants Base needs.  When doing my search for additional cards to get to the free shipping, I excitedly ran across the 2011 Elite Extra Edition Andrew Susac card that I needed as well.

I usually put in more effort to finish the prior year's Topps sets before the release of the new year but that didn't happen this year.  I think the main driver is the lack of availability of the Future Stars that Never Were inserts from Series 2. I still need 11 of those cards in addition to the 89 Mini Die Cut of Derek Jeter to finish Series 2.  My lack of enthusiasm carried over into update where after these 3 World Series Heroes cards I still need 5 more to go along with 4 more 89 Mini Die Cuts.

I am having a lot of fun picking up Chili Davis cards for my new player collection.  I was able to pick up these new additions including the Devil Rays and D-backs Inagural cards and a Topps Traded Tiffany card.  In a  pretty short time period I have acquired 253/605 of Chili's cards. Many of them are cards I haven't seen before and from sets I haven't collected much.  Most of my player collections are HOFers so to have someone to collect who is affordable is a new twist. 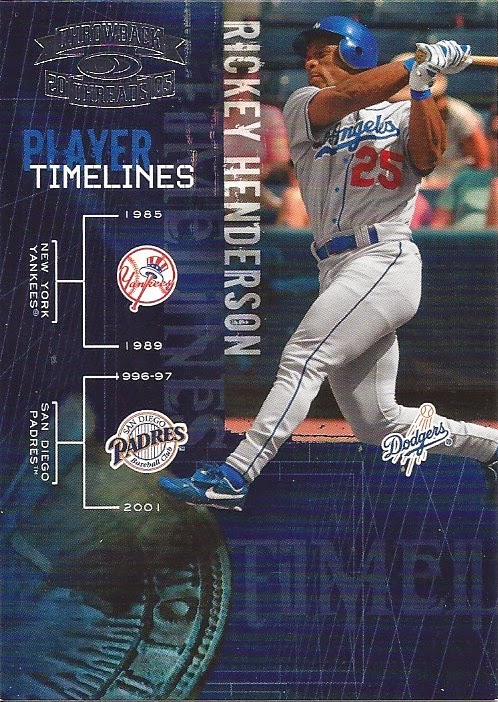 I also picked up a new Rickey Henderson card for the collection.  It comes from his dark period where he played for the Dodgers.  This Throwback Threads Player Timelines card was an insert and also shows the period of time he played for the Yankees and Padres.  My love of Rickey is strong enough to spend some of my hard earned cash on a Dodger card. 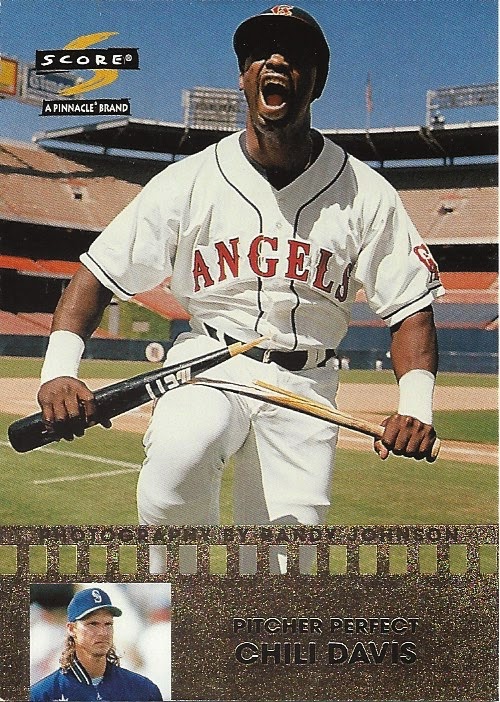 Finally, my favorite card of the package.  I hadn't seen this card until I was scrolling through the sellers cards.  I only needed 10 cards to get free shipping and had reached that when I ran across this awesome picture.  With the stands being empty it appears this is a staged photo but the broken bat over the knee and the expression on his face makes this cardboard gold.
Posted by arpsmith at 8:38 AM