I am a fan of the work of photographer Charles Conlon.  The first Conlon cards I am familiar with were produced in 1981.  They are 100 4"x 5" cards in the set and they were put out by The Sporting News.  I believe there are 9 Giants in the set and I have 7 of them in my collection.  There were several other sets issues using Mr. Conlon's photography over the years and the one I come into contact with the most is the black bordered sets that started in 1991.  The first series was 330 cards and for each year between 1991 and 1994 a series of 330 cards were produced.  In 1995 another 120 card set was produced and with the consecutive numbered it ended up being a 1430 card set.  I have the first 4 series up through card 1320 and would love to track down the last 120 cards if I could find them affordably.

I recently purchased a set from 1987 also featuring the work of Conlon.  Here is a brief write-up about the set from beckett.com.  The second series of 60 Charles Martin Conlon standard-size sepia toned photo cards was produced by World Wide Sports in conjunction with The Sporting News. Reportedly 12,000 sets were produced. The photos were selected and background information written by Paul MacFarlane of The Sporting News.

My set came with this COA. 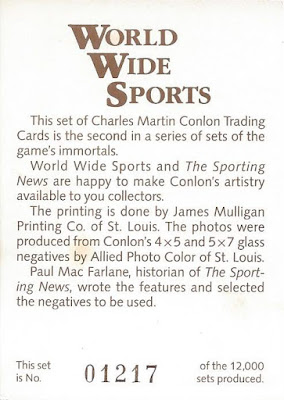 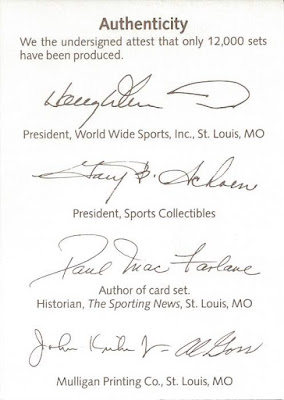 I really enjoy this photography from the early years in baseball and wanted to share this set with everyone.  Depending on your perspective, the lack of text on the front can be a good or bad thing.  On the positive side, it maximizes the size of the photo and provides for no distraction.  On the negative, it doubled the scanning I needed to do if I wanted to share who was featured on the cards - some are pretty obvious like card #1 below, others are of players who aren't as familiar.

I decided to break this into 3 different posts and include 4 cards in each scan.  To add a little more that just show the cards, I thought I would share one fact I found interesting from reading the backs.  I hope you enjoy. 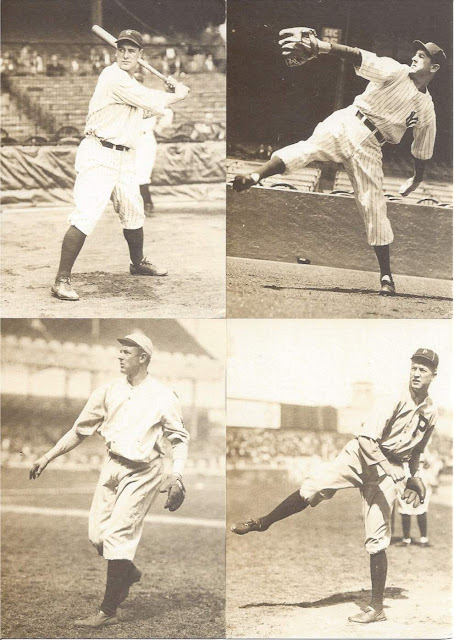 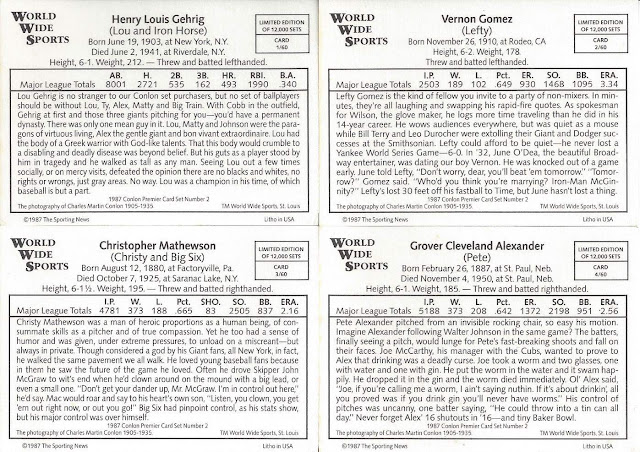 Favorite fact - Grover Cleveland Alexander was quite the drinker and also had a pretty nice sense of humor as well. 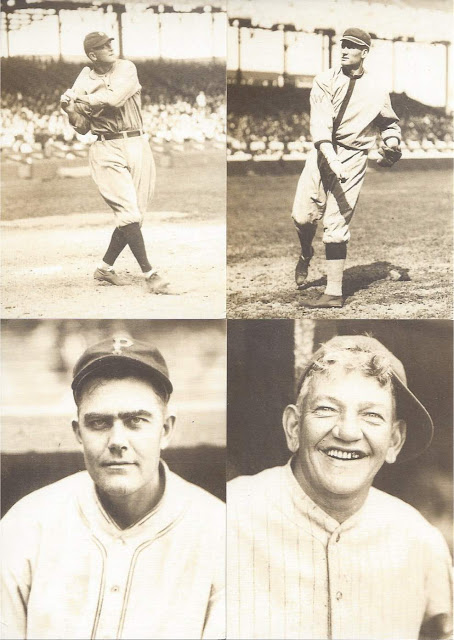 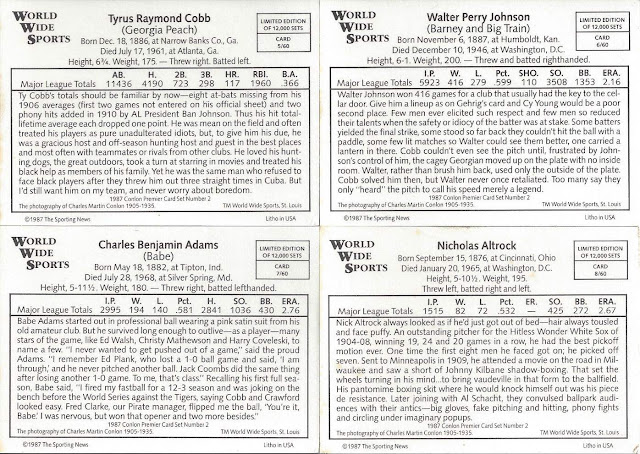 Favorite fact - Nick Altrock had an awesome pick off move, I doubt picking off seven of eight guys will ever be matched. 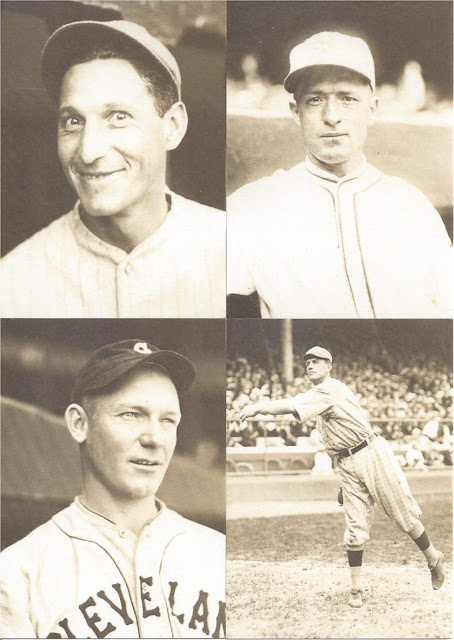 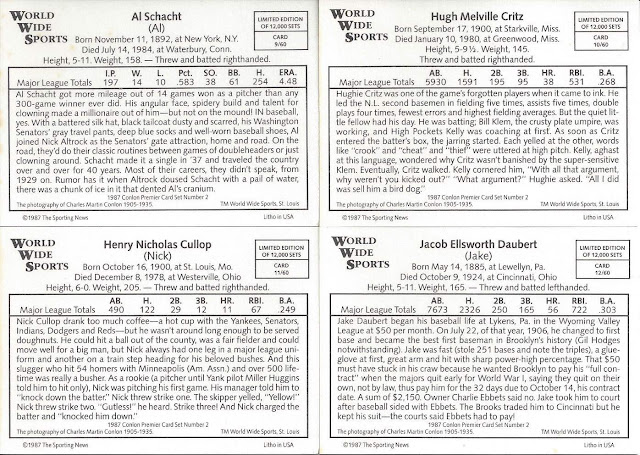 Favorite fact - It appears that umpires and players used to engage in much more banter (and commerce) than what goes on today. 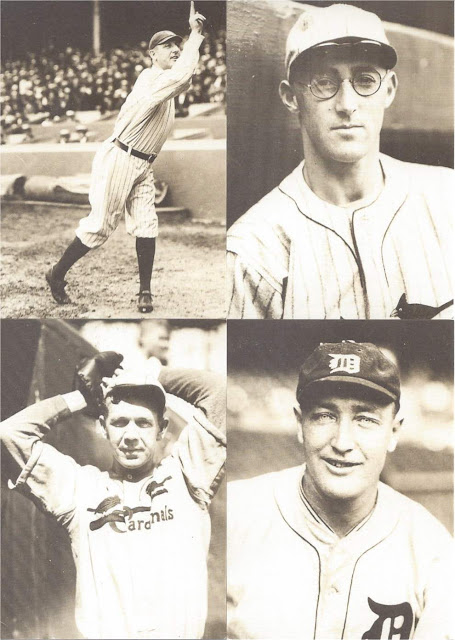 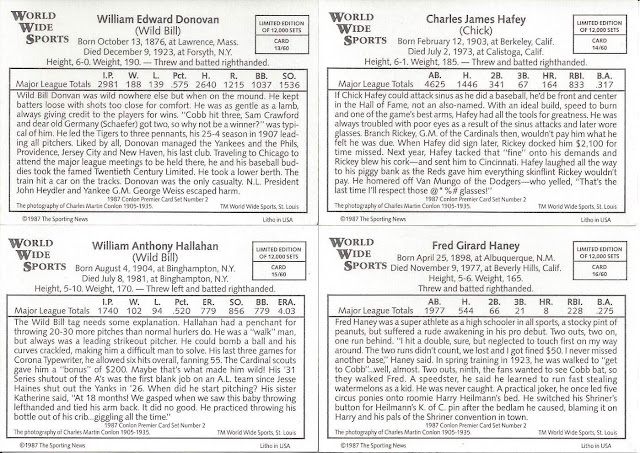 Favorite fact - Wild Bill Donovan died early in a tragic way and sure sounded like a good dude to hang with. 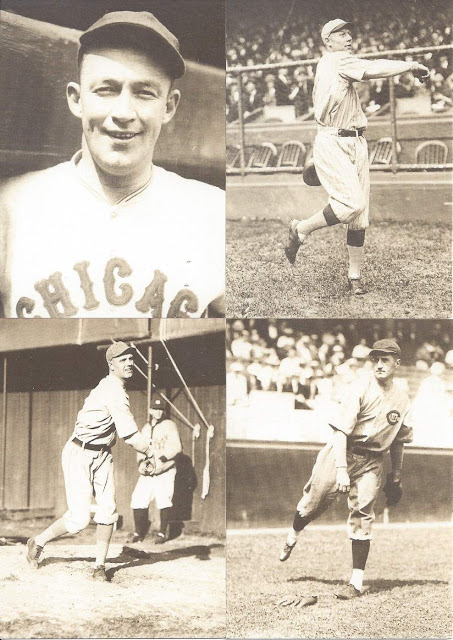 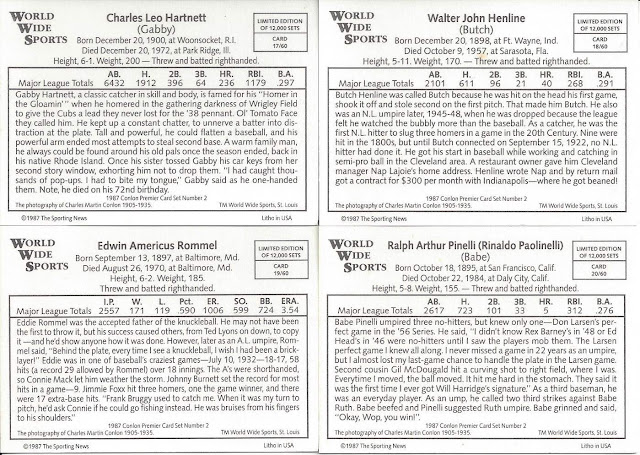 Favorite fact - I wasn't aware that Eddie Rommel is considered the father of the knuckleball.

Hope you are enjoying the set, 2 more posts yet to come.