Catching Up With Patrick Ewing

I am, and never was, a great basketball player. My best moments in school were when I could get down in the paint, box guys out and grab some rebounds and put backs.  I always say I am guard sized (6' tall) with a power forward skill set.  Unfortunately for me this didn't translate into anything past high school freshman ball other than some dominance in a couple college 6' and under intramural league championships.

My attraction to big guys probably evolved from the skills I personally possessed.  The first two hoops guys I player collected were Patrick Ewing and Charles Barkley.  I later added Chris Webber to the mix.  I think I was drawn to their talent and the fact they were big guys who banged inside. The only guard I collect is Harold Miner who went to USC when I was in school and was my neighbor my junior (and his sophomore) year.

With 2015 being my year of the base card, I made a list of base cards I needed in my player collections and tried to grab some during my card collecting purchase.  I thought I would group all my Patrick Ewing cards into one post.  Nothing earth shattering but it is fun to check out some of Ewing's photos from throughout his playing career.  One thing I noted when putting this together is that almost every photo is an action shot, unlike many of the baseball cards we get today. 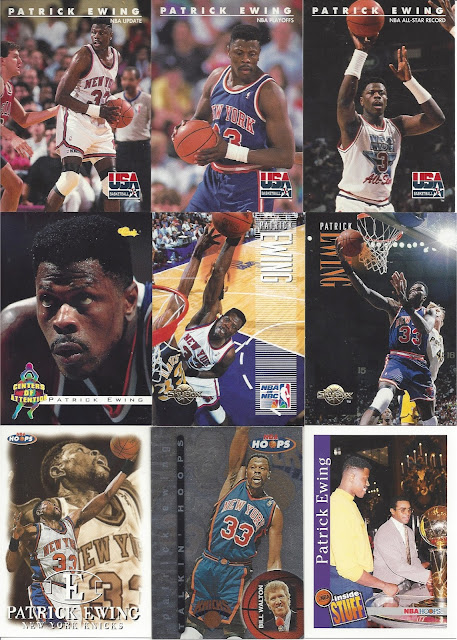 Notable in this first scan are the 3 USA basketball cards across the top. The Dream Team was a huge thing and there was a set put out with 9-10 cards of each player and these 3 finish off my Ewing portion of the set.  The Classic card is one of the few that doesn't show some action but it brings back my memories of Ewing sweating up a storm.  The dude was playing so hard he was drenched every day.  Anyone remember Inside Stuff?  I was a TV show hosted by former football player Ahamd Rashad that was so popular it was featured in a couple card sets. 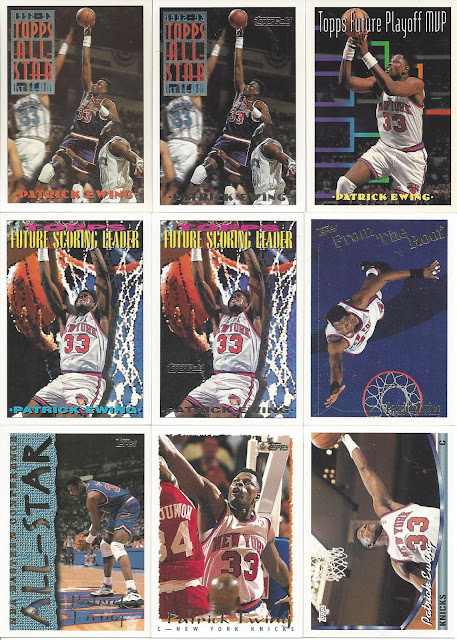 Hoops cards were immune to the parallel explosion that Topps started in the 1990s.  Not the small Topps Gold logo on the two top/middle cards - I remember how excited I was to pull some of these "rare" gold cards back in the day.  The from the roof cards made for some cool photography. I really  like how the card on the bottom right displays Patrick's massive wing span - how did anyone get a rebound against he and the Knicks? 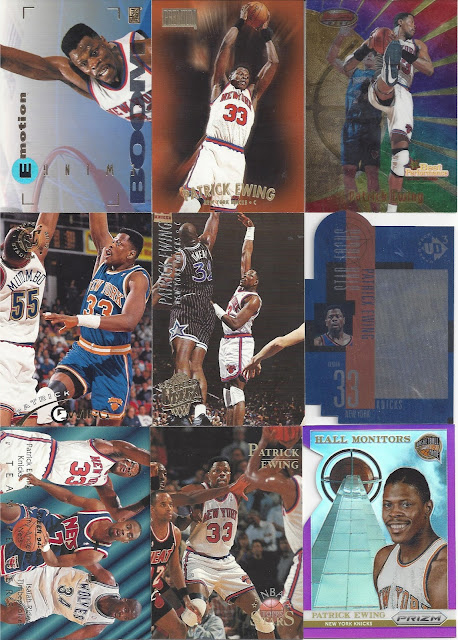 These cards get into the middle to late 90s and start showing off some higher quality and shinyness.  Still lots of action shots here.  The bottom right corner card is a recent Panini Prizm release.  It is a die cut purple parallel serial numbered to 49. It doesn't really fit with the rest but I won it at the LCS bid board and thought I would include it here. 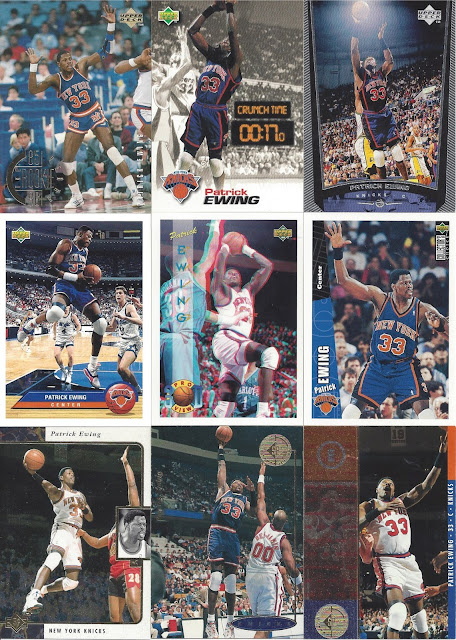 This is a group of cards from Upper Deck and features some of my favorite action shots.  I wonder if the close proximity to the court by the photographers helps capture some of these in game action shots better than some other sports. I also think the athleticism of the hoops players helps in the creation of these cards. 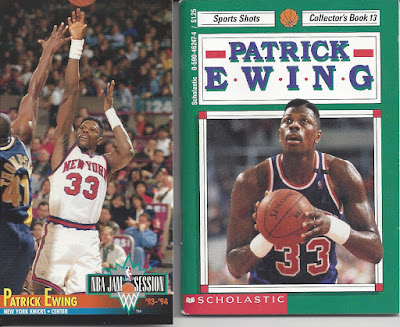 These final two items are kind of oddballs.  The NBA Jam Session card comes from one of the sets produced in the mid 90s that are the same shape and size of the Tall Boys from the 70s.  The item on the right is actually a small book with some information about Ewing and his career up to that point. It was a cool oddball I picked up at my LCS that closed recently.