My collecting life started as a set collector with the first set I completed being 1981 Topps.  Prior to the explosion in the number of sets I had a pipe dream to have one of every base card for all the major companies. Due to that explosion, I had to narrow my goals and I decided on this:
As you can probably guess I was able to get my hands on a 1998 Upper Deck set within my price range.  I played a little Russian Roulette as I didn't have the funds when I found the listing on eBay. The seller had 3 listed for $75 Buy It Now and I waited until 2 were bought before I pulled the trigger.  For what I believe was $12 shipping, I was able to fill my final Upper Deck set gap for $87.  There are quite a few subsets so I thought I would take you on a tour of the set. I am thinking this is one set most are too familiar with and it will also allow me a chance to dig in and enjoy the set.

Cards 1-8 History in the Making - these cards celebrate the first inter-league regular season games with the front showcasing a star from the game and the back showing the box score and a small summary of the game. 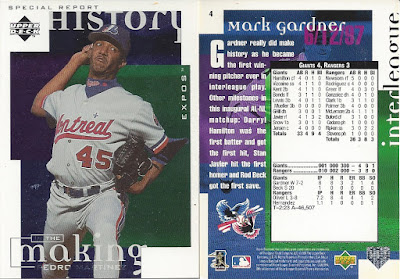 Cards 9-18 Ken Griffey Jr.'s Hot List - I am assuming these are guys that Upper Deck spokesman Ken Griffey Jr. selected as the Hot players (including himself) in the game. 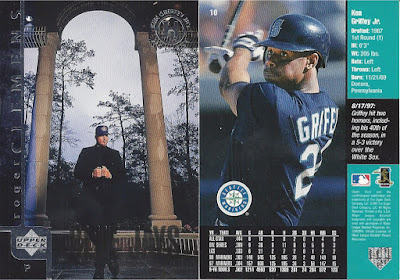 Cards 19-135 Base - These cards are mostly grouped by teams in alphabetical order by city name with each team having 7-8 cards.  This section contains the Angels through the Expos. 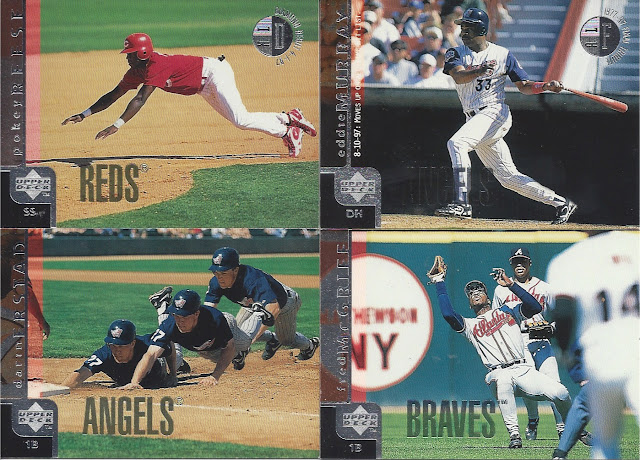 The fronts contain both portrait and landscape cards with the usual outstanding Upper Deck photography.  On the Pokey Reese card you can see a Debut designation in the upper right corner and the Eddie Murray has a Final Tribute designation. 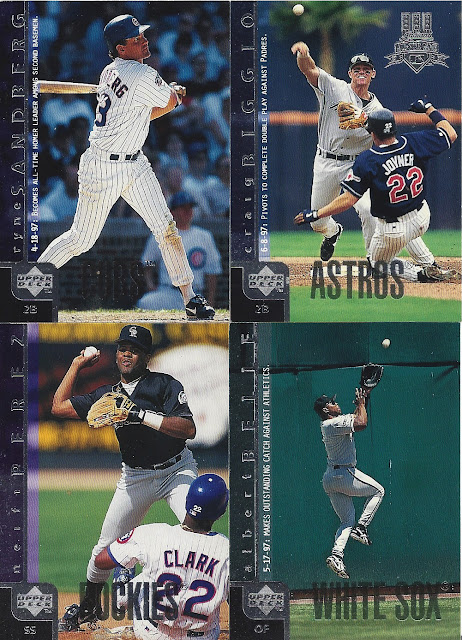 The portrait cards contain some awesome action as well.  The Craig Biggio has an All-Star logo in the upper right corner.  Looking at these 8 card fronts you can see that some of them have a date and highlight beneath the player name and some do not. 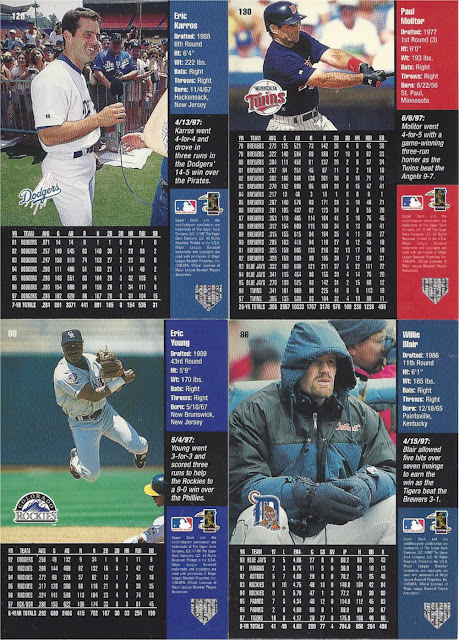 The card backs also showcase some great photography with both candid and action shots.  Upper Deck includes the full career stats as seen on the Molitor with the font remaining the same size and the photo getting smaller - nice on the eyes.

Cards 136-153 Define: the Game - these cards showcase a number of star players with a quote describing the way they play the game.  The quote starts on the front of the card and ends on the back.  There are photos on both sides and the back contains some statistical comparisons to support the quote. 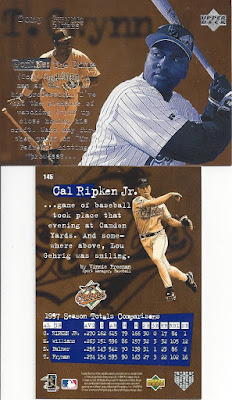 Cards 154-243 Base - this section finished off the rest of the teams containing the Expos through the Blue Jays.

Cards 244-252 Checklists - Upper Deck pairs their checklist cards with players that have had highlights throughout the season.  The front has a nice big picture of the player with a circle sharing his name and the date of the highlight.  The back describes the accomplishment, has another photo and lists the cards in the set. 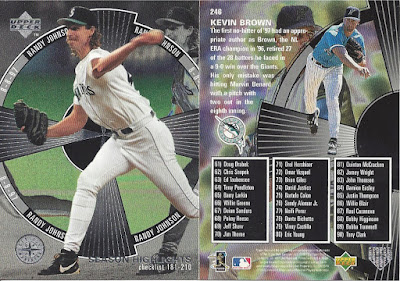 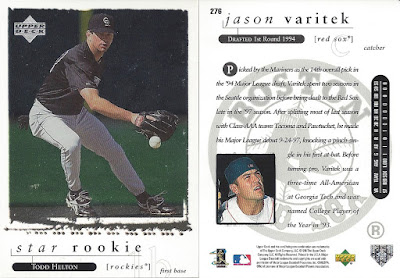 Cards 289-360 Base - the Series 2 base follow the same format with teams being arranged by alphabetical team order Angels - Tigers.  I also noticed the introduction of some awards designations like the Most Valuable Player and Rookie of the Year. 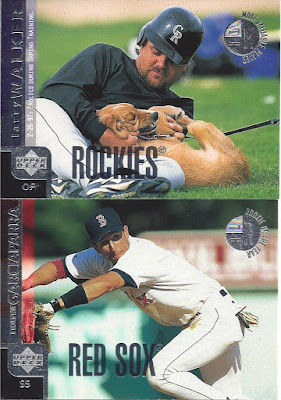 Cards 361-369 History in the Making - more cards celebrating the first inter-league games.  The design is the same as Series 1.

Cards 415-432 Postseason Headliners - there are cards here for the deciding game of each of the 1st round match ups then cards for each game in the LCSs and World Series.  The front has a photo of a star player and the back has a short game summary and the box score. 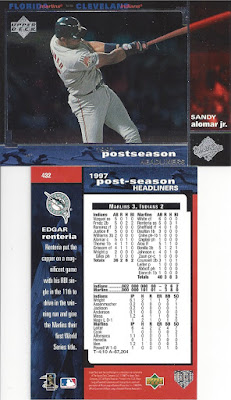 Cards 532-540 Checklists - Series 2 is finished off with Checklists of the same design as Series 1.

Cards 541-600 Star Rookies - Series 3 starts off with a 60 card run of the Star Rookies in the same design as the prior 2 series.  There are some good names in the group but the best true rookies are of Magglio Ordonez and Gabe Kapler.

Cards 601-630 Eminent - these are the cards that were short printed 1 in every 4 packs.  These are really nice looking cards with black borders and featuring the star players in the game and the subject and rarity help drive up the cost/value of the set. 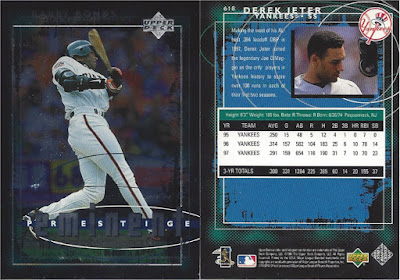 Cards 631-747 Base - the completion of the base set.  In this series the number of player varies greatly with some teams having 1 card and other going into double digits.  This Series contains the two Mike Piazza cards including the notable Florida Marlins card of the newest Hall of Famer.  The Mets card is numbered 681 and the Marlins 681a. 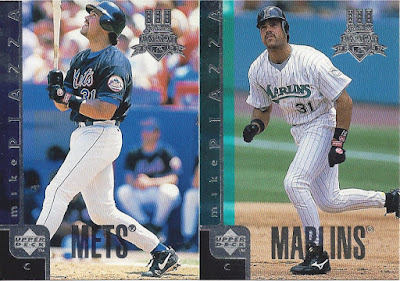 Cards 747-750 Checklists - the final 3 cards are checklists of the same design for the final series.

There you have it, a tour through the 1998 Upper Deck set.  I have to say it is one of my favorite Upper Deck sets of all time.  It feels great to have the complete run of Upper Deck cards, I miss having them producing baseball sets.  They raised the bar in 1989 and kept raising it throughout the 22 years the put out baseball sets.
Posted by arpsmith at 12:02 PM