Anyone Want Some Cards?

I need your help fellow collectors.  I have run out of space and need to move some cards to make room for the cards I decide to keep from my large collection purchase and any other future additions to my collection.  Prior to acquiring the collection, I had quite a few duplicate sets and a ton of doubles and I am hoping we can work out some trades.  I have an issue with throwing cards away but that may end up being the fate of some of these cards if I can’t find any takers.

I am not looking for huge trade returns for these, just enough for me to mentally justify shipping them out because as you know postage rates are pretty darn high these days.  For those of you that have sent me packages in the past, I will happily return the favor if you see something you would like.  Remember these are in addition to the Google Doc with a list of what I am in the process of inventorying from the purchase.


First off, here is a pic of a table covered with misc. cards sorted by team: 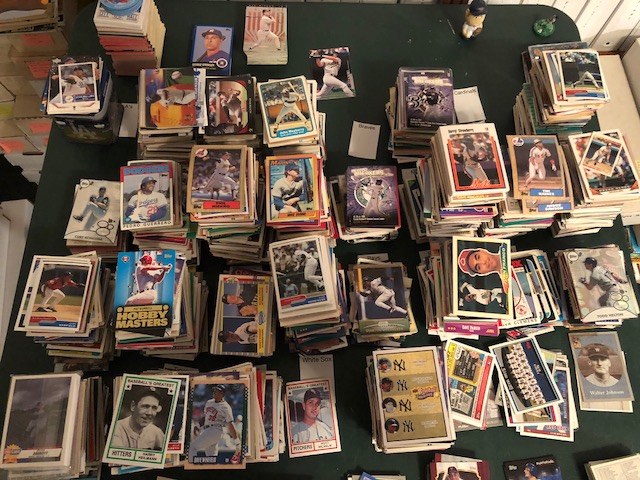 I have lots by team of cards that aren't part of the sets or partial sets listed below.  There are some base cards, insert cards, oddball cards, etc. in here.  No autos or relics but I may be able to toss a couple in of your team if I have them in surplus.  I have already sent out the A's, Braves, Cardinals and White Sox.  The rest are available, with some stacks bigger than others.  No Giants stacks here but I have thousands of Giants dups if a fellow Giants collector is out there.

Next, I will list the Baseball sets I have duplicates of:

I will also list a few Football sets I have duplicates of:

In addition to these sets I have tons of duplicates.  Most of these sets I could put together a pretty solid starter set and/or try to fill any want lists:

My hope is to be overwhelmed by the responses to this post and move all these cards.  Make sure to tell your friends or point fellow bloggers to this post so they can contact me.  I am realistic and know that most likely, I will only get a few takers then have to make some tough decisions.

I have been a card hoarder my entire life so it will be tough but I need the space so I am probably going to have dispose of some of these to clear out space..

Remember I am not looking for equal volume or book value etc.  Just enough for me to feel okay about the shipping costs to get these cards into a collector’s hands versus the local landfill.