I always thought it would be fun to purchase a large collection of cards off someone.  In my dreams it was always a collection vintage cards from the 60s and earlier for about a penny a card from a grandma that had no clue what she had.  Well, this wasn't the case.

A friend at work does a lot of buying and selling on Craig's List. He collects primarily beer memorabilia but has told me that quite a few large collections have been up for sale in our area.  A couple months back, I was hanging out one evening and decided to take a look on Craig's List instead of watching my daughter's bedtime cartoon. I found an ad that indicated someone had a collection that took up a large portion of his garage and he wanted to sell it all to one person.  He didn't provide a price but promised he would give a firm but fair price if one came out to look at the collection.

I shot him an email and got a response the next morning.  I set up a meeting at the guys house for a Friday afternoon.  The guy's characterization was pretty accurate, much of his two car garage had cards.  There were shelves and tables around the perimeter with boxes and binders of cards and sports related stuff.  I saw a mix of sports and non-sports cards.  I thumbed through some binders, opened a few boxes that claimed to have full sets and talked a bit to the owner.  He was moving and just wanted to clear everything out.  Some things I saw that gave me some perspective - a 1982 Donruss set with the Ripken, a 1984 OPC set with the Mattingly, a box of Empire Strikes back cards, a box of 1980 Topps football cards and an autographed Don Drysdale picture.  I also saw that a big percentage of the cards were from the late 80s/early 90s including multiple sets from 1986-90 Topps.  I had plenty of cards from that era so I was on the fence about the purchase.

I asked for the price and it was surprisingly reasonable.  He indicated he was firm and wouldn't go down and I knew he had one guy who was leaving as I got there who was negotiating with his wife as he would need a small storage unit to house the collection.  I took a break and decided to call my wife to gain her perspective.  To my surprise she encouraged me knowing how much fun I would have going through it and was okay storing the collection in the basement as I went through it.

I have started sorting through the cards and here is a quick pic of some complete sets I have found in the collection. 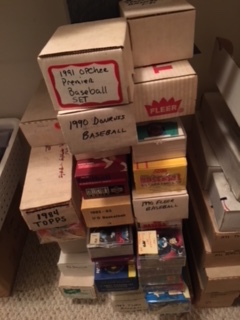 Check out a video of most of it in my basement, I tried to sort it a little but man is there a lot of stuff.

I went back to the seller and made a deal. I loaded by my Toyota Sequoia and headed home for what would be the first of 7-8 trips over the course of the weekend.  I have started the process of going through the cards but it will take a while.  I have decided to keep a record of what I go through on a google docs spreadsheet, if you are interested take a look and if you want to follow my progress give it a bookmark.

If you see anything in the video or on the google doc you are interested in, leave a comment or drop me a note.
Posted by arpsmith at 9:13 PM