My Contribution to Modern Sportscards with Rickey Henderson

As you may know from some past blog posts, I am a big Rickey Henderson fan.  I grew up in Northern California and while I was a Giants fan it was hard to not be electrified by what the best lead off hitter in baseball history brought to the game.  I went to quite a few A's games in my youth and my Rickey collection was started right around the time as my Willie McCovey collection.  I think it is time to tell my story about an impact I had on some of the recent baseball card releases.

About 3 years back the All-Star Game was held in Anaheim and I went to the Fan Fast for a couple of days.  I went one day solo and one day with my oldest son.  On the second day I was there I found out that Rickey would be signing autographs for free the following day if you had a ticket to the Fan Fest. I decided to plunk down some cash and go for one more day.

I got there about 30 minutes before the doors opened and there were tons of people out front of the Anaheim Convention Center.  When the doors opened I raced to the signing area for Rickey and still ended up quite a ways back in line but still within reasonable reach to get an autograph.  I quickly struck up some friendships and exchanged Rickey and collecting stories with my neighbors in line and Rickey showed up pretty much on time.

Word started to spread that Rickey was being Rickey.  He was on his cell phone, not engaging with the fans and worst of all had declared he would only sign the ticket stubs from the event.  Several people around me has some impressive pieces of memorabilia that they wanted signed (a game used batting helmet, a poster with about 30 or 40 players where Rickey was one of the final signatures he needed, etc.) and they got pretty mad.  I had brought a rookie card of Rickey and was disappointed as I didn't have an autographed card of his in my collection.

As we got closer to the front, Rickey got off the phone and started having fun with the fans.  He also loosened his signing standards a bit, now 8 X 10s were in play.  We saw him sign a couple oddball things but saw more turned away. I didn't see one card getting signed so I got my ticket stub ready.  Finally my time came to walk up on the stage and I decided I might as well go for it.

I approached Rickey and said hello.  I told him I had been a fan of his since his rookie year and had been collecting his cards since the mid 1980s.  I acknowledged that I heard he wasn't signing cards but was hoping he would make an exception as I was one of his biggest fans.  He looked up at me, smiled, shook his head a little from side to side and said, gimme the card.  He signed it and thanked me for being a fan.  The kid and his mom behind me quickly asked, since you signed his card will you sign mine.  Rickey looked back at me and in a joking tone said "See what you got me into, if I sign a bunch of cards, I won't have any value to the card companies."

I saw my in and tried to educate Rickey a bit.  I told him that he had very few cards on the market and quite a few collectors who chased his cards and paid top dollar for them. (If you aren't aware, Rickey hadn't had an certified autos since 2006 and most of his cards were 1/1s or very limited runs /5 or /10)  I told him that he should have his representatives reach out to Topps and that they were the only licensed card company right now.  I told him that based on his collector base, his popularity and the rarity of his signature out in the market place he should be able to command top dollar for his autos.  He looked up at me, smiled, nodded his head and said, "I may just have to look into that".

Wouldn't you know it but starting the next year, Rickey started showing up with autos in products and now he starting to have more and more autos in new releases.  Odds are, something was already in the works but I like to think that I am responsible for Rickey starting to sign for card companies again.

Here is that autographed rookie from the Fan Fest that was my first auto card of Rickey in my collection: 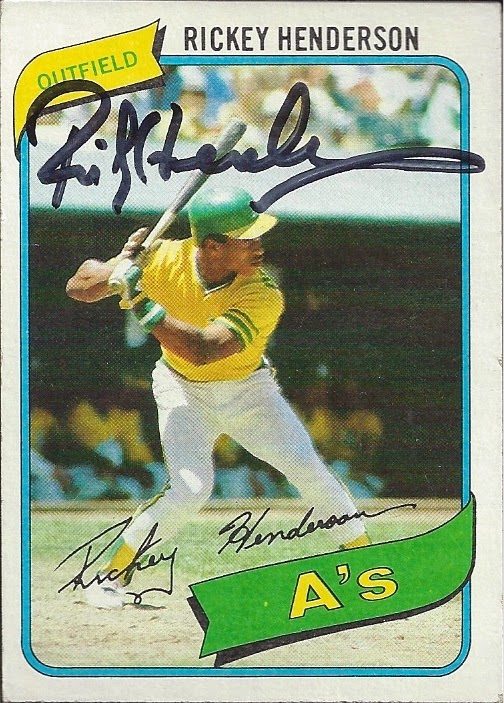 I saw him sign it personally so I don't have any concerns about its authenticity but just in case you were wondering... 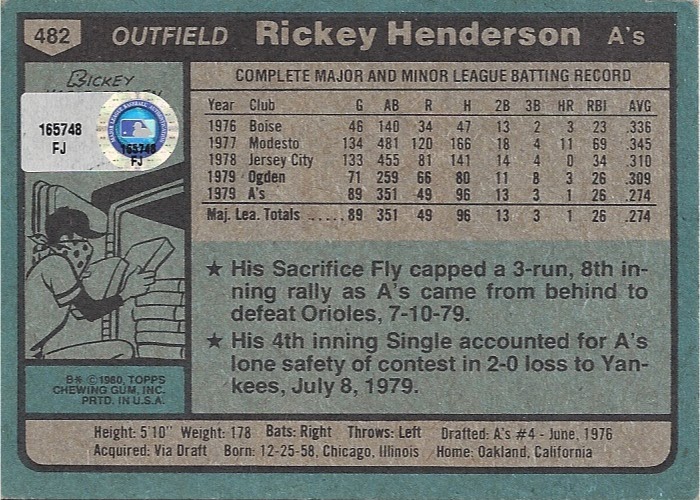 There were authenticators on site that put a sticker on the back to prove authenticity.

I also picked up this card that has Rickey's signature on it, it was my first certified auto from a card company. 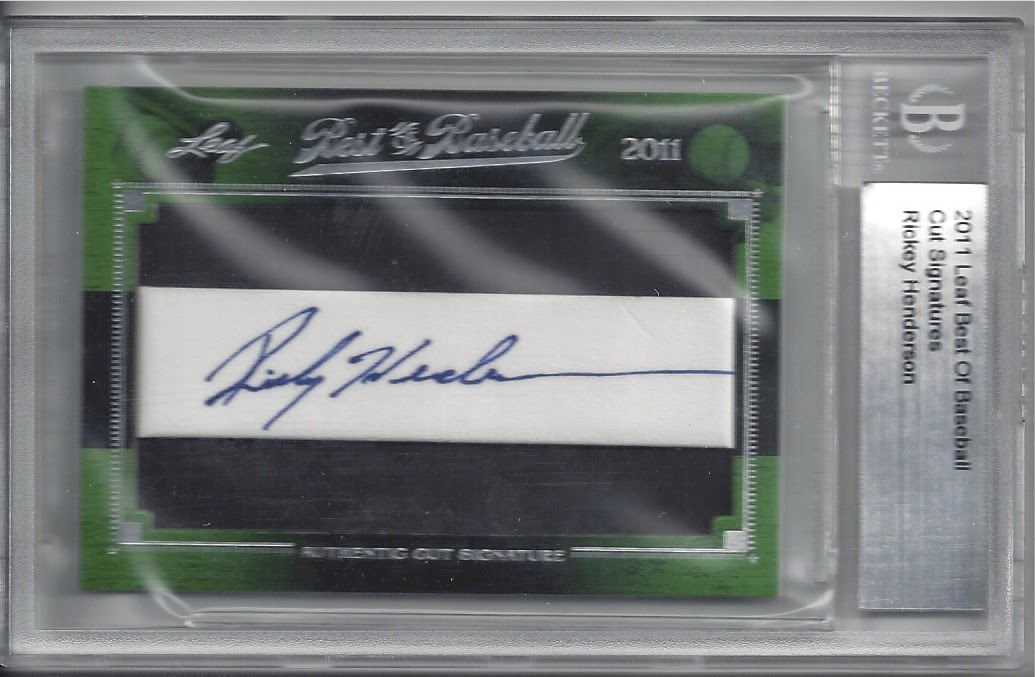 Not too exciting but I could afford it and it added to my Rickey collection.

A couple weeks back I stopped by my LCS, picked up 4 packs of Gypsy Queen and pulled a Jeff Bagwell printing plate.  I put it up on eBay for a $60 buy it now and it was quickly gobbled up.  I added a few bucks to it and picked up this beauty: 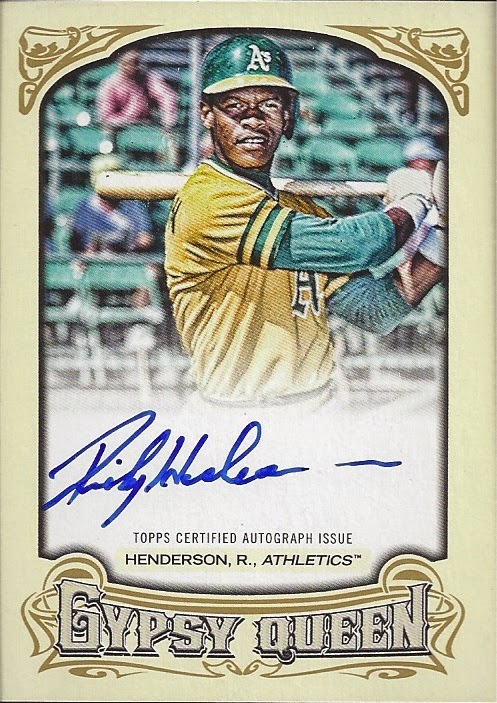 I beautiful on card autograph of one of my favorite players of all time.  I think this card is just great looking.  The picture looks to be from early in Rickey's career and is one of my favorite cards in my collection.  It is great that I could finally benefit from my inspirational talk with Rickey on getting back into the hobby.
Posted by arpsmith at 8:48 AM