I haven't been posting as much as usual lately due to a variety of factors - I have been watching a lot of Giants games via MLB.TV, spending more time with my wife in the evenings, busy with the kids and I have been trying to get a little more organized.  Fortunately, my buying of cards that fit into my collection really hasn't slowed down.

I thought I would share a few of my recent Rickey Henderson and Reggie Jackson cards.  Up until the past year or so these 2 player collections have been somewhat dormant but I am having fun picking up their cards lately.

First up are some Gypsy Queen minis.  I was happy that both guys had regular and variation versions and I was able to grab all 4.  I also recently got a good deal on the green version of Reggie's 2013 GQ card.  This one is serial numbered 72/99.

Speaking of serial numbers, here are 3 recent Rickey pick ups that are all serial numbered.  Once again Topps did a nice job with the base cards in Museum Collection.  The green parallel Rickey numbered 141/199 look great with that green A's logo on the card.  The middle card is from the dark days when Rickey was on the Dodgers.  I contemplated skipping these Rickey cards for my collection but my desire to get as many player cards as I can won out.  The Topps Gold parallel is numbered 1580/2003.  Finally the Playoff Honors card commemorates Rickey's 1990 MVP and is numbered 1188/1990. 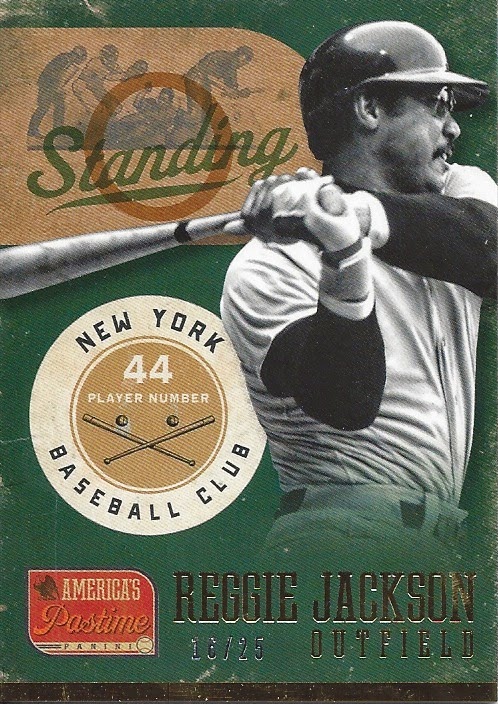 I was able to snag this Standing O parallel insert of Reggie from the Panini America's Pastime release.  This one is 16/25 and is on a nice thick card stock.  Reggie certainly earned a few Standing O's in his career. 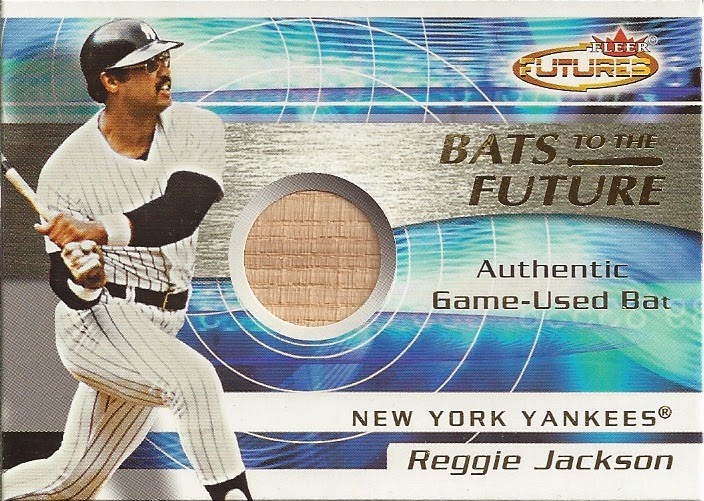 Last but not least is a nice bat relic out of 2001 Fleer Futures.  I think this card has a solid design and I am glad to add a little piece of Reggie's bat to my collection.
Posted by arpsmith at 12:03 AM